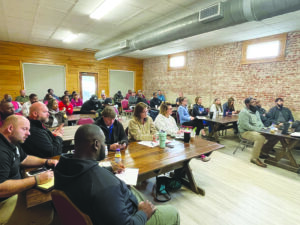 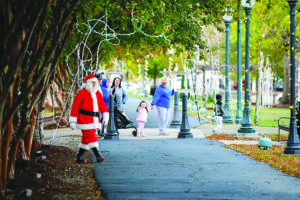 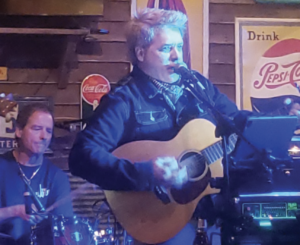 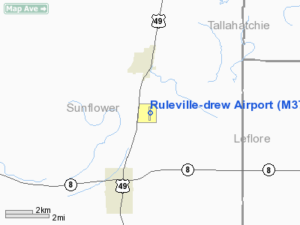 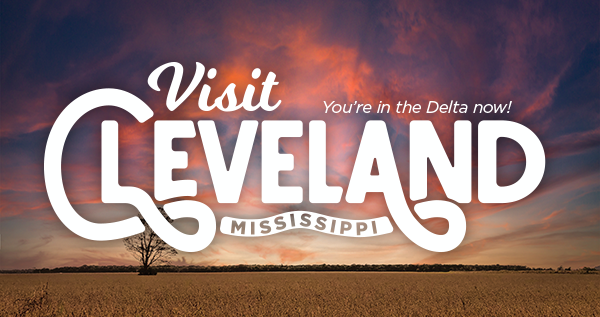 Cleveland tax revenue figures are very promising By Jack Criss The Bolivar Bullet Last week, The City of Cleveland received new numbers from the Mississippi Development Authority regarding tourism-based revenue–and the numbers were impressive. “We got the tourism tax for September this past week, and it came in at $113,899– a 20.68% increase over the same month last year,” said Sean Johnson, Director of Tourism for Visit Cleveland. “Overall, tourism revenues are up 9.62% for the year. In 2022, tourism has so far generated $1,269,315 in taxes which equates to $63,466,000 in tourism spending in the city limits of Cleveland. This doesn’t include Boyle or the restaurants just outside of the city limits so, the overall tourism impact would be a bit more,” said Johnson. Prior to last year’s outlier year, the growth in Cleveland’s tourism tax revenue averaged 4.77%. “This year, we doubled that average,” said Johnson.  “I receive a monthly email report/spreadsheet from MDA with numbers from every city in the state that has a tourism tax,” said Johnson, “and our numbers are impressive.” Last year also showed strong increases, reported Johnson. “I’ve been involved in tourism work since 2010 and its usually always the case that every year for any given town will show some increases,” he said. “But what we’ve seen here in Cleveland is substantial. Five years ago, Cleveland’s annual tax revenue was $873,000–and you look at this year and it’s $1,269,315–that’s almost a 400% increase.  When the Covid lockdowns started in early 2020, the numbers dropped, of course,” continued Johnson. “But I attribute the growth from 2021 on to stimulus money that came to people who had more time on their hands–we saw a 15% growth that year–and tourism organizations like ours also received funds–$150,000–to assist in marketing. But, in actuality, both the low year of 2020 and the higher year of 2021 could be considered artificial due to the Covid circumstance in the former year. and the stimulus monies pumped in during the second year,” said Johnson. Johnson said that, while at the State’s recent Tourism Conference, the last two years are not really being looked at closely for trending purposes and are considered more as anomalies. “We’re all looking at pre-pandemic numbers and rates to base and compare where we are now,” he said.  Looking ahead for the next few months, Johnson said he has every reason to expect tourism tax revenues to continue to rise. “Especially with ‘50 Nights of Lights’ now taking place–and continuing to grow as a major attraction and Christmas traditions–as well as people continuing to resume a more normal shopping and traveling routine for the holidays,” he said. “Our local merchants have done incredible, over-the-top jobs on their window dressing, sales deals and festive atmosphere. It’s like a true  Hallmark Christmas experience!”

To receive our
e-newsletter, The Bullet Today, sign up here!

The Bullet Today, is sent to email addresses in and around Cleveland and Bolivar County at 11am Monday-Friday. 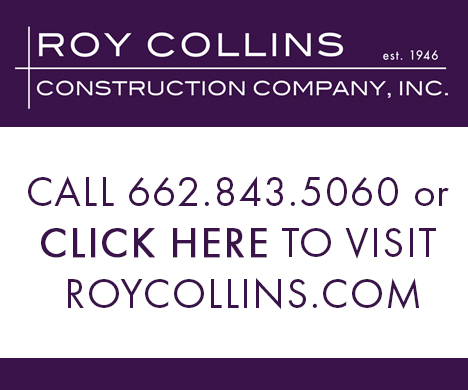 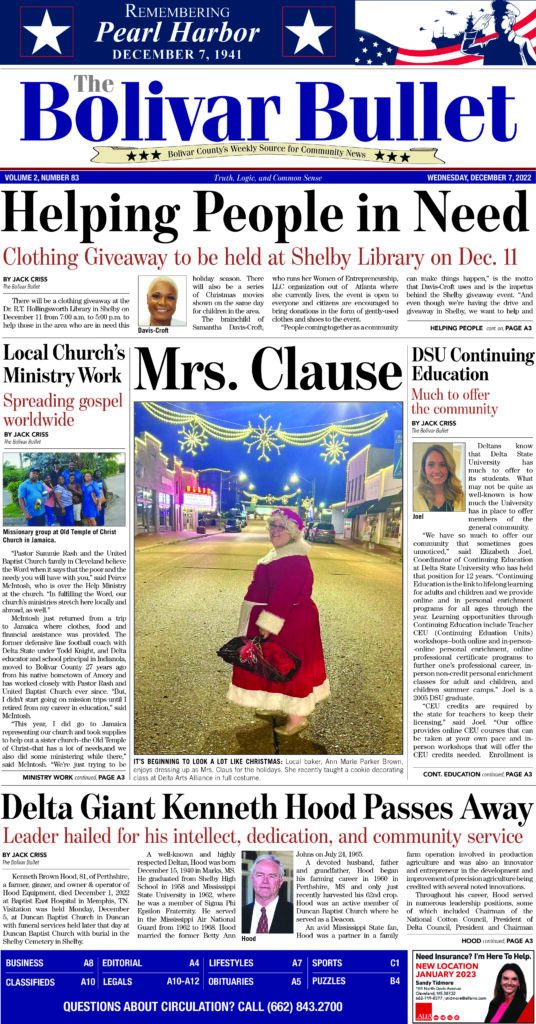 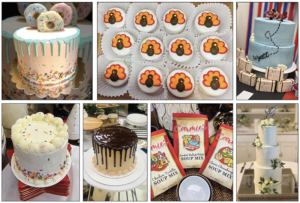 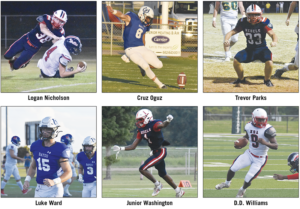 NSA has four to play in 1A/2A/3A game,  Bayou has two set to play in 4A/5A/6A game By Andy Collier Sports Editor, The Bolivar Bullet 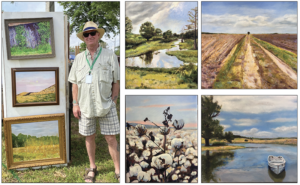 A true Delta artist by Jack Criss The Bolivar Bullet Born and raised in Ruleville but currently a Cleveland resident since 2014, artist Eulie Frank

The Bolivar Bullet is Cleveland, Mississippi’s one and only newspaper. The publication reports news and other editorial content that is important to the community. The paper also  highlights the positive aspects of life in Cleveland and Bolivar County.
The editorial scope of The Bolivar Bullet encompasses community news of substance plus designated weekly sections such as Letters to the Editor, LifeStyles, Business, Farming, Food, Outdoors and Sports. Guest Commentaries are also featured each week as are  personality profiles of residents, Bolivar County history, crime reports, births, engagement and wedding announcements, and obituaries. 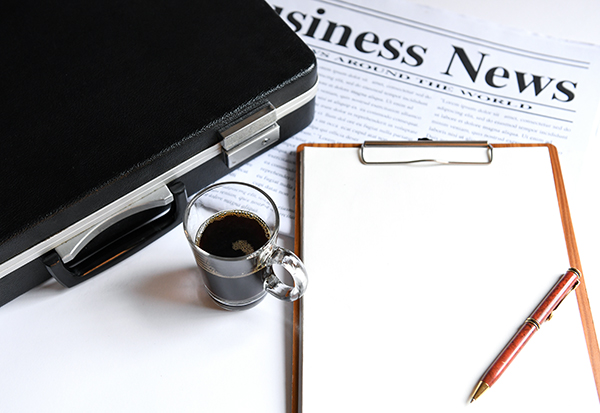 The Bolivar Bullet printed newspaper, circulated each Wednesday, offers anyone who desires to reach households and businesses in Cleveland and Bolivar County, Mississippi with an advertising message the means for targeting a highly focused audience without large waste circulation. Due to the specialized nature of The Bolivar Bullet, display advertising, legal notices and insert rates are very attractive. 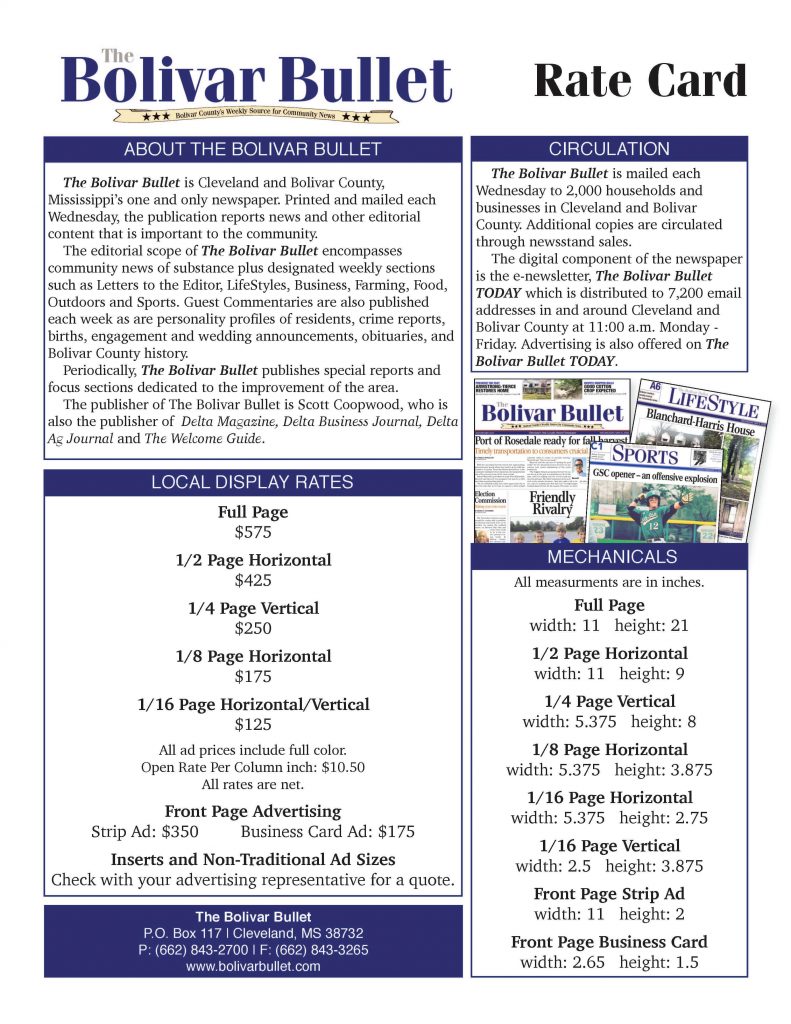 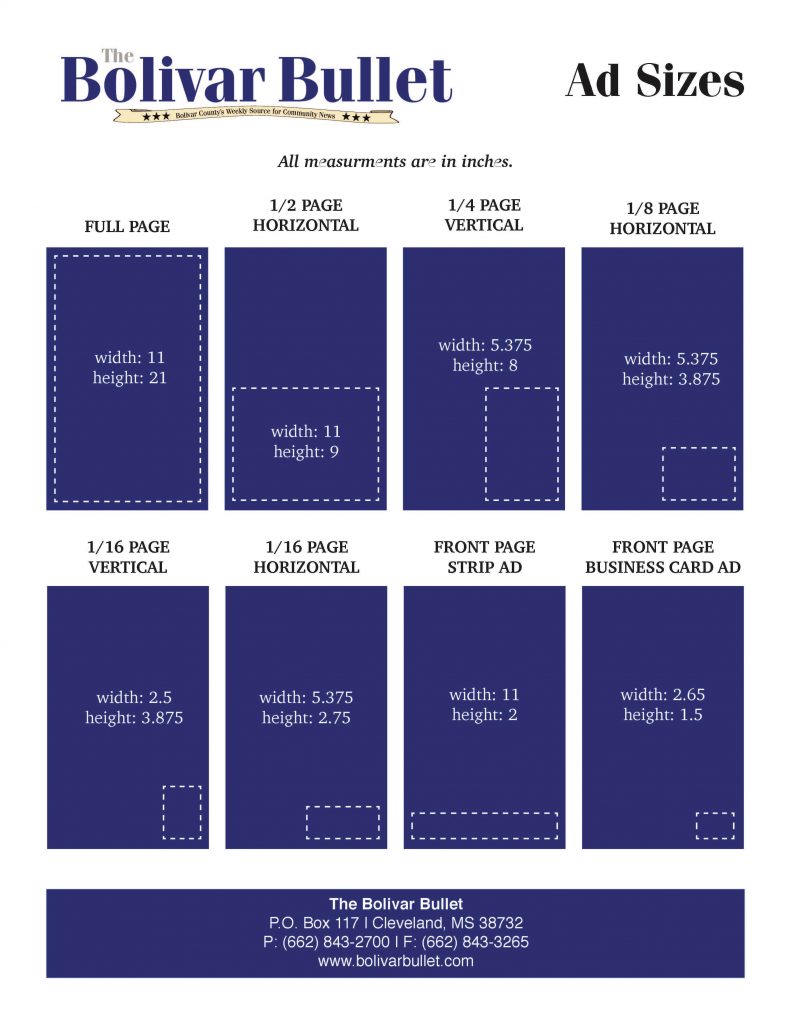 Begun in 2002, The Bullet TODAY is the digital component of The Bolivar  Bullet newspaper. This is a daily e-newsletter mailed to
people in and around Cleveland, Mississippi, at 11am Monday – Friday.  In fact, many refer to the e-newsletter as Cleveland and Bolivar County’s “daily newspaper!”  Special editions are also emailed to readers when breaking news occurs.
The Bullet TODAY is free.  Click here to add your email address to receive The Bullet TODAY. Our company will not reveal or share your email address. All email addresses are totally confidential and  you have the ability to opt-out at any time. Again, there is no charge to receive our daily e-newsletter.
Get E-Newsletter

Your subscription to The Bolivar Bullet will give you complimentary access to our website when you send us your email address. We will add you to our  daily e-newsletter, The Bolivar Bullet TODAY that will arrive in you inbox at  11:00 a.m. every morning, Monday-Friday.
Here’s How to Subscribe:
1) Fill out the form found in this section of our website.
2) Call our office at 662-843-2700 with your credit card information.
3) Send your check to: The Bolivar Bullet, PO Box 117, Cleveland, Miss. 38732.
4) Email us at holly@bolivarbullet.com
5) Stop by our office at 125 South Court Street, Cleveland.
Order Now!

Please reach out to us with any questions, concerns, or comments.

The Bolivar Bullet gladly accepts confidential tips. If you have one, please email it to publisher@bolivarbullet.com or send a letter to Publisher, The Bolivar Bullet, PO Box 117, Cleveland, Miss. 38732. 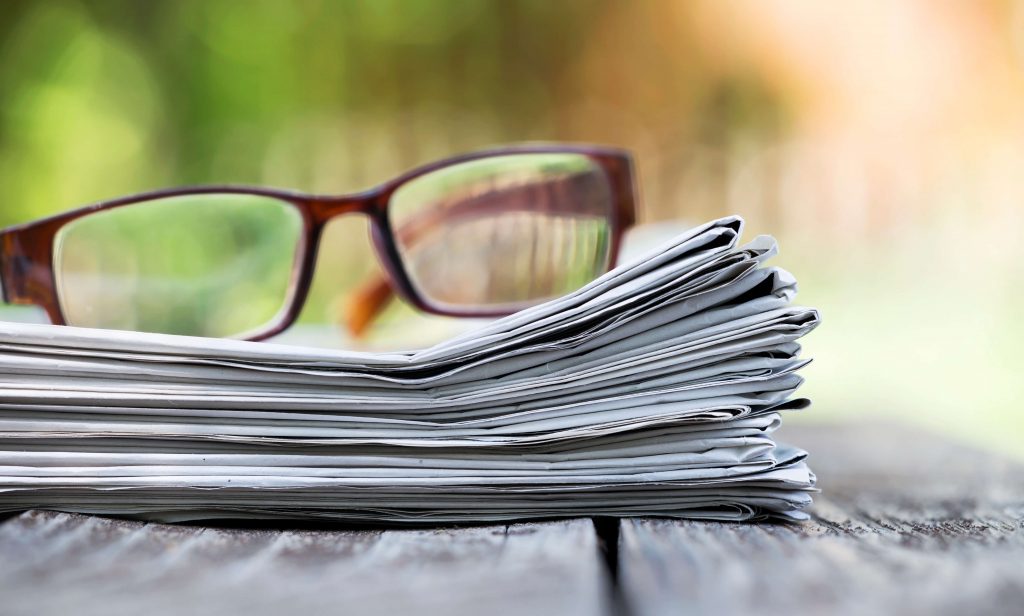 The Bolivar Bullet is a community newspaper and we invite our community to participate in this newspaper. Please send us your press releases, photos, articles, columns and other information you would like published in the paper. We will review it and if it meets our standards, we will be happy to publish it.