Airport Upgrades On the Way 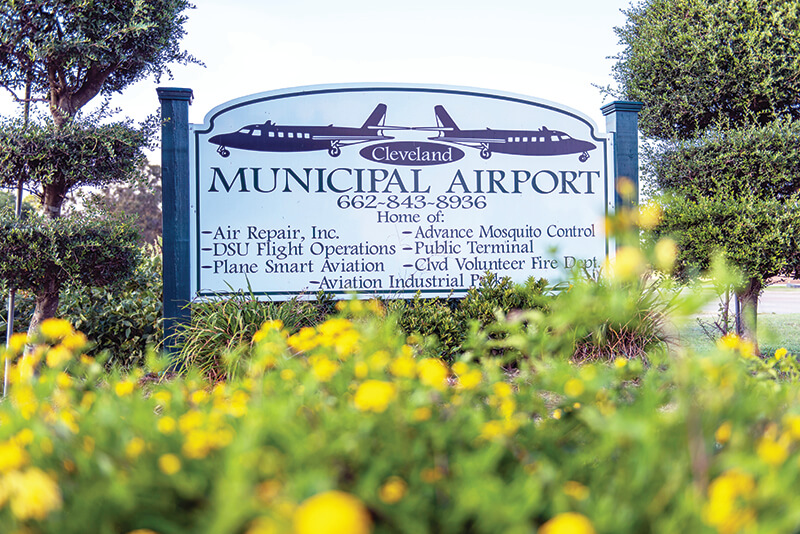 Despite slowdown from coronavirus good things are soon to land.

Two nautical miles northwest of downtown Cleveland, the airport provides a home base and support for local and regional pilots, Delta State student pilots, and cross-country travelers simply looking for a place to land and refuel.

Rated for local general aviation (GA) and assigned the call letters RNV, the Cleveland airport typically accommodates between 55,000 and 60,000 operations (takeoff or landing) per year.

Because of the shelter in place orders and business slowdowns throughout the country the airport has been quiet lately.

“Corona has hit aviation hard,” said Clint Johnson, Airport Director. “All our corporate traffic at this point has become nonexistent. We normally have business jets in on a weekly basis. We haven’t had a corporate flight in probably eight weeks since everything hit.”

The airport traditionally operates with a very lean staff and is owned and operated by the City of Cleveland, meaning they have been able to weather the crisis without layoffs or furloughs. Plus many airport operations are required regardless of air traffic.

“We still have to keep the grass cut,” said Johnson.

In the midst of slow traffic, the airport staff are staying busy with a lot more. A terminal expansion is currently underway constructing an additional 300 feet or terminal ramp to the north side of the airport. This will provide, among other things, an extra area for aircraft parking.

“This is the first step to any other expansion,” said Johnson.

Next year, the airport will undertake another project, recoating and remarking the field.

“There is recommended pavement maintenance every 5-8 years and we’re right at the 8-year mark,” said Johnson.

The process will fill cracks, apply seal coat, restripe and recoat the runway.

“It’ll make it look brand-new and extend the life of the airport greatly,” said Johnson.

The maintenance will require several days of shutdown, but that will be coordinated with all the tenants to not disrupt traffic. While the project is on the agenda for next year, specific timing has not been determined yet and the airport has not even begun to take bids.

The ramp expansion opens up a cornucopia of possibilities for future growth including a large hanger on the land just north of the airport.

Blues Air, the most recent business to locate at the airport was also considering expanding their operations before the pandemic. Phillip Krasner and his two partners, Ike Brunetti and Bern Prewitt, opened Blues Air in February 2017 to provide flight instruction and licensure to people who were not enrolled at Delta State.

Blues Air not only provides flight instruction, but also aircraft rental, wildlife surveys and pipeline controls, among other aerial services. They hope to expand and add tailwheel aircraft to their training fleet and also hope any airport expansion would bring additional revenue for their fuel sales business according to Krasner.

As terminal expansion continues and runway maintenance marks next year’s agenda, the airport is, by all reports, in a strong physical and financial place. Besides the challenge of the coronavirus and less activity at the airport, the only other challenge that has taken place recently is some building damage brought on by high winds during one of the the episodes of recent bad weather.

“We’ve been very fortunate with grants the last few years,” said Johnson. “Right now, all our short-term needs have been met.”

With short-term needs supplied, Johnson and his crew can devote time to development and the possibility of making those expansions come to fruition.

By Amile Wilson– The Bolivar Bullet