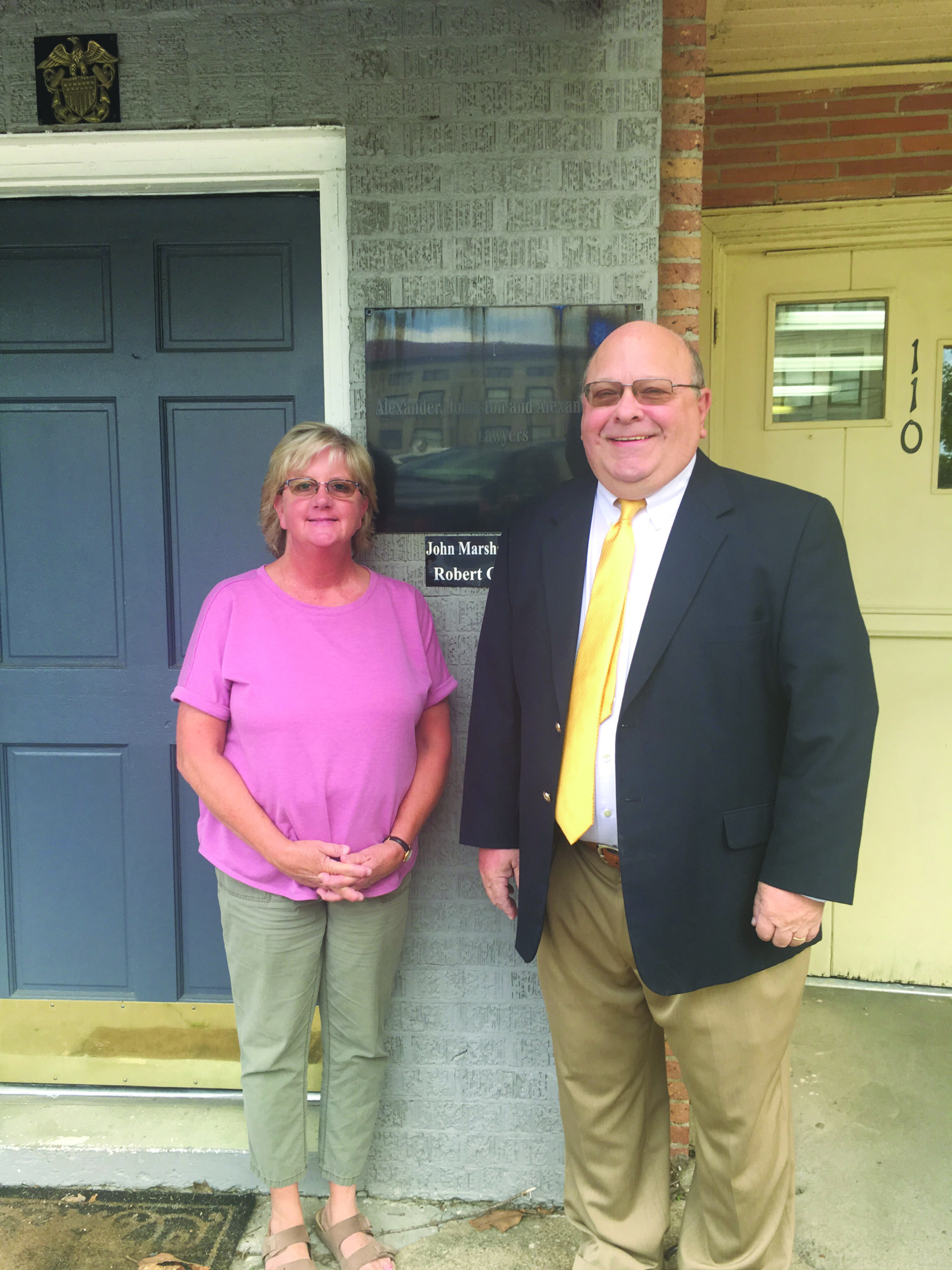 Cleveland has long since been the background for thriving law practices and Alexander, Johnston & Alexander, P.A. is one such firm.

Its rich history is as notable and as storied as any other.

It all began in 1921, when William Brooks Alexander, called W.B., opened a law firm on Court Street. W.B. (1894-1960) was raised in the middle Tennessee area and  attended Virginia Military Institute for two years, but had to drop out when his father died.

“He moved to Ruleville for a short time, where the family had a friend, then landed a job with Planters Bank of Boyle about 1914,” said John Marshall Alexander. “ In 1916, he married Vivien Burns Beaver of Shaw and they made their home in Boyle. While working at the Planters Bank of Boyle, W. B. and Vivien studied law at night at their kitchen table. In 1920, W. B. was elected mayor of Boyle.”

John Marshall said in 1921, W. B. went to Jackson to sit for the Mississippi Bar examination, along with graduates of prestigious law schools such as Harvard, Yale, Vanderbilt, etc. (none from Ole Miss, since Ole Miss graduates were, at that time and until about 1984, exempt from the bar exam). Despite having not attended law school or even having finished college, W.B. made the second highest score on the bar exam and was admitted to the bar on July 8, 1921.

“Because he had no car, he got up early every morning and walked along the railroad track from Boyle to Cleveland and was at his desk in the law office before anyone else was up and about,” he added.

Courtney C. Pace (1902-1979) of Pace practiced with Alexander during the late 1920s and early 1930s. Pace later served as top assistant for Senator James O. Eastland for the entirety of Eastland’s career in the U.S. Senate.

“Shortly after the end of World War II and upon his return from the war, Joseph C. (Joe) Feduccia (1910-1978), a native of Cleveland graduate of the University of Mississippi School of Law in the 1930s, joined W. B.  in the practice of law and they formed the firm of Alexander & Feduccia,” John Marshall explained.

In 1948, after his service in World War II and graduation from the University of Mississippi School of Law, W.B. son, William B. (Bill) Alexander Jr. (1921-2006) joined his father and Joe Feduccia in law practice in Cleveland. A short time later, the firm became Alexander, Feduccia & Alexander.

“During the early years of the law firm, the clients came primarily from the area of Shaw, Skene, Boyle, Cleveland and Merigold in Bolivar County. The firm’s office was on Court Street in Cleveland for 29 years. In 1950, the partners of the firm constructed a new building at 112 North Pearman Avenue in Cleveland where the firm’s offices have been for the last 71 years. The building at 112 North Pearman has been expanded twice, first in the late 1960s and again in the late 1990s,” he added.

Bill had many interesting cases in his career, though John Marshall recalls one in particular.

“A guest at the Grover Hotel on Sharpe Avenue suffered a decapitation due to a malfunction of the hotel’s elevator. It could not be determined exactly what went wrong, but the elevator was not supposed to cause one of its occupants to lose his head during the elevator ride,” he said. “He also took a case in the 1950s of a waitress with the last name of Johnson at the Conservation League restaurant on Lake Beulah, who lost an eye when a glass bottle of Coca-Cola with a metal cap suddenly burst open when she lifted it from a cooler to serve. This is the type of cap that ordinarily took a bottle opener to remove. In pursuing the case, Bill had a dilemma. Under Mississippi law at the time of the injury, in order to recover damages, the waitress had to prove specific negligence.”

There was no such evidence available, yet there had to be negligence somewhere along the line in the bottling of the Coke because the bottle was not supposed to explode like it did when the poor waitress picked it up.

“Bill put on his case in the Circuit Court, urging the Court to adopt the doctrine of Res ipsa loqitur, a Latin term meaning the thing speaks for itself,” said John Marshall.

The Circuit Court rejected Bill’s argument and rendered judgment against the waitress. On appeal to the Mississippi Supreme Court, Bill cited cases from 40 or so states that had adopted Res ipsa loqitur. The Supreme  Court decided to join the other states in recognizing Res ipsa loqitur, allowing trial juries to infer negligence from the very nature of an accident or injury in the absence of direct evidence of negligence, and reinstated the case, allowing the waitress to recover damages.

“When I was in the first year of law school studying Res ipsa loqitu, the lead case cited in the hornbook, Prosser on Torts, was Johnson v. Coca-Cola Bottling Company from Bolivar County. I had never heard the story of the case, but got a first-hand account from my father,” John Marshall added.

In 1965, Robert G. Johnston (1939-2020), a native of Memphis with deep family ties to Tippah County, Mississippi, and a graduate of Mississippi State University and the Vanderbilt School of Law, joined the firm. Robert G. Johnston also served for 30 years as an officer in the United States Navy Reserves, retiring in 1993 as a Navy Captain (O-6).

In 1971, Joseph C. Feduccia withdrew from the firm to assume the duties of Circuit Judge for Bolivar, Coahoma, Tunica and Quitman counties. Thereupon, Senator William B. Alexander, Jr. and Robert G. Johnston formed the firm of Alexander & Johnston.

In the early 1970s, Lloyd Eades Hogue of Benoit and Houghton Francis “Chips” Elias, Jr. were associated and practiced law with the firm. Later, Lloyd Eades Hogue was Chief of the Organized Crime Strike Force in the United States Department of Justice and thereafter enjoyed a successful private practice in New Orleans.

“William Brooks (Brooks) Alexander, III, a graduate of Mississippi College and the University of Mississippi School of Law, and the son of Bill Alexander and grandson of W.B. Alexander, joined the law firm in 1976 and shortly thereafter the firm’s name was changed to Alexander, Johnston & Alexander, which it remains today,” said John Marshall. “Brooks Alexander practiced with the firm from 1976 until 1993, when he withdrew to attend seminary and enter upon the Baptist Ministry in which endeavor he is still engaged. During his time with the law firm, Brooks was twice elected as Bolivar County Attorney and also served as Cleveland Municipal Prosecutor for many years.”

As for John Marshall, his story picked up in 1981.

He is a graduate of Delta State University and the University of Mississippi School of Law. He practiced with the firm until his appointment as Assistant United States Attorney for the Northern District of Mississippi in Oxford, a position which he held from 1982-2013. After many years as a frontline federal prosecutor, he was promoted to Chief of the Criminal Division and served from 2010-2011 under court appointment as interim United States Attorney.

His father’s law firm was not only where he started his love of the law, it also served as the setting where he met the love of his life.

“One morning in June of 1985, I was on my way from Oxford to federal court in Greenville and I stopped at my parents’ home in Cleveland for breakfast. My dad said that I should go meet the new secretary at the law office. He told me that Melissa had just graduated from Delta State in music and was looking for a music teaching job, but, because she had previously worked in several law offices, was working for the summer at our law firm,” said John Marshall. “After finishing with my court appearance in Greenville, I stopped by the law office in Cleveland and met Melissa. We hit it off and began dating. She took a teaching job in Louisiana and we had a long distance romance for a while, but married four years after we met. Now, 36 years later, with four children and two grandchildren so far, and living in the hills for many years, we are right back where we started.”

Bill and Robert Johnston continued to practice law under the firm name Alexander, Johnston & Alexander, P.A., until the retirement from full-time practice of Alexander in 1997 when Robert G. Johnston continued the practice as a solo practitioner. Johnston’s contributions to the practice of law were legendary and his credibility within his profession were unprecedented. According to John Marshall, the firm has closed at least 15,000 real property transactions ranging from the simplest of sales to multi-million dollar loans. In the early 1990s, Johnston was one of two attorneys in the entire State of Mississippi that was permitted to close loans that were to be sold by the originators to Prudential Insurance Company of America, and many large farm loans.

Although mostly retired, Bill continued to come to the law office every day he was in town, tending to church, family, civic and farming matters, until the day before his death in 2006.

Johnston continued the firm of Alexander, Johnston & Alexander as a solo practitioner for many years while also serving as City Prosecutor for Cleveland from 1993-2020. Robert served a total of over 55 years in the law firm.

In 2014, John Marshall, having retired from government service, returned to Cleveland and rejoined the firm as a partner. The firm purchased the practice of Edward A. Luckenbach, a longtime real property, title and loan closing attorney in Greenville, Mississippi. The firm successfully maintained the Greenville office until 2019, at which time John Marshall retired from the firm to pursue other endeavors, yet continued to come the law office in Cleveland on most days. In November 2020, when Johnston became ill, John Marshall Alexander returned to the firm at the request of the Johnston family and the firm continues with John Marshall Alexander as the sole attorney in the firm. On July 8, 2021, the Cleveland firm of Alexander, Johnston & Alexander, P.A., will have been in continuous operation for 100 years.