Appalachian Trailblazers – Bolivar Countians taking the walk of a lifetime 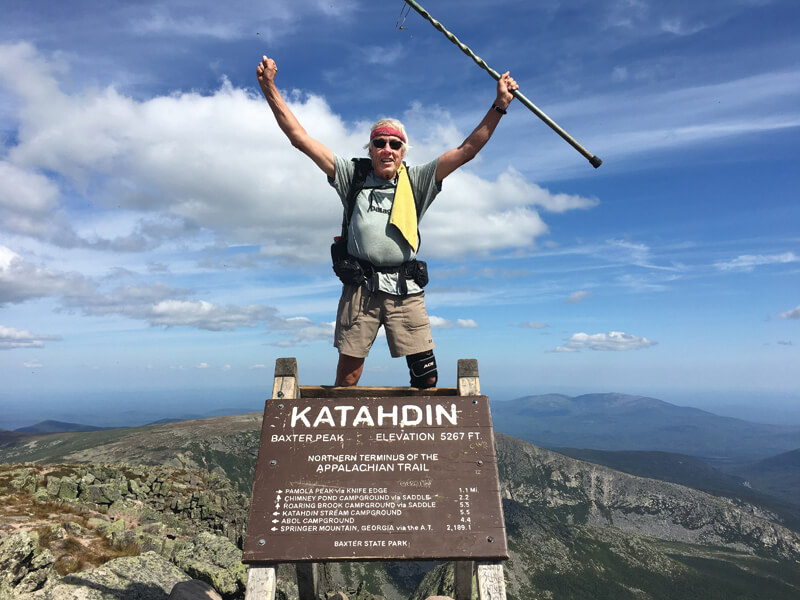 So why take on the elements, pain, and suffering?

“Because it’s the experience of a lifetime!” says John Denton, a retired farmer who grew up in Shelby and lives in Cleveland. “Once you do the Appalachian Trail, you won’t ever be the same again.”

And he means it.

Every year, an estimated two to three million people hike a little or a lot of the 2,190-mile Appalachian Trail, a footpath that extends from Georgia to Maine. Many start the five-million-step journey; few finish. In fact, since the 1930s, only 20,115 hikers have earned the prestigious 2,000-miler status. These include the “thru-hikers,” who traverse the entire trail in a single season and the “section hikers,” who complete the AT over multiple years

Many who have hiked the trail, say it is one of those life-changing experiences. In fact, those who have hiked it, categorize everything as “before the trail” or “after the trail.”

Blake Moore, of Cleveland, was in college when he completed a 28-day backpacking trip in the Eastern Alaska mountain range as part of the National Outdoor Leadership School. This, in addition to a spring break trip to the Appalachian Trail, was inspiration for a “thru hike,” which he completed at the age of 26, starting April 12 and finishing September 15.

“Thru hiking the AT was something I’d always wanted to do,” says Moore. “I’d planned on doing it when I graduated from college, but then I went to work as an accountant. The last thing you want to do in a professional career is ask for six months off. But I did it anyway.” (By the way, he was promoted and given a raise while on the trail.)

Denton section hiked the AT in just two seasons. Over the 2017 and 2018 summers, at the ages of 65 and 66, Denton alternated his time between the trail and the Delta.

“I read about the trail back in the ’60s—I must have been 12 or 13 years old,” he recalled. “The article was in National Geographic, and I said, ‘One of these days I’m going to do that!’  A few years ago, I thought I better hurry up. I almost waited too long.”

Appalachian Trail hikers don’t know each other by their given names. Instead, they go by trail names, which are usually gifted by fellow hikers according to noticeable habits, hobbies, or peculiarities.

Moore is “Mississippi Bear” because of Ole Miss’s mascot debate of Colonel Reb versus the Black Bear. Although it’s not the reason for his trail name, Moore is quick to recount a bear sighting in the Shenandoahs.

“One day I had my headphones on and was just rocking out the miles,” he said. “I looked over and there was a bear, eating blueberries by the trail. I was like, ‘Hi bear!’ I was so close that I could have touched him.”

Denton, appropriately is “Johnny Walker”—not because he drinks whiskey, but because he walks—a lot.

“I started with a group and hiked with them all the way to Virginia,” says Denton. “I got off the trail for six weeks and then got back on at Hanover, New Hampshire. I didn’t get across the street before I heard, ‘Hey, Johnny Walker!’ I fell right back in my same bunch.”

“Hike your own hike” is the wise advice for hiking the Appalachian Trail. But, there are a few concerns that all hikers share on the trail.

Of course, shelter and water top the list. Shelters are dotted along the trail, and most hikers come prepared with ample clothing, sleeping bags, and tents or hammocks. As for water, creeks and springs are plentiful along the AT. On his hike, Moore didn’t filter his water and had no problems. Denton always filtered his.

Minor injuries are to be expected (and hopefully prevented) on the trail. Blisters, sore muscles, fatigued knees, pack rash, and twisted ankles are just part of the fun. Pain and discomfort are constants, so there’s no use in complaining. Clothes are never dry due to either rain, snow, or sweat.

It’s the major injuries that are most worrisome. Imagine hiking all the way from Georgia to Maine and then having to give up and go home. That almost happened to Denton.

“I usually busted my you-know-what every 50 miles on the trail,” he said. “I got all the way through New Hampshire and the rocks. The trail was finally getting a little easier. I was happy and bumping along when, all of a sudden, I fell hard. I screamed—it hurt so bad.  I thought somebody was going to have to carry me out of there.”

Eventually Denton got back up on his feet and hobbled three-tenths of a mile to a shelter.

“I thought I was done,” he admitted. “But, the next morning I got up and kept going. I limped the rest of the way—I barely made it up Mount Katahdin.”

Gear, pack weight, and proper footwear are other concerns. Then comes basic sustenance. With five million steps come at least one million thoughts of food.

“I figured out how to eat,” Moore said, explaining that he had to change his diet after losing 30 pounds in the first three weeks of his hike. “It’s all about calories. My goal was to eat ten thousand calories a day. I didn’t always hit that, but it was my goal.”

It’s tough to eat that much without weighing down the pack. So, as THE TREK wisdom dictates, a hiker “should eat as much as possible, whenever possible.” That means making the most of the occasional restaurants, fast-food joints, and gas station stores.

“You gorge yourself as much as you can when you get to town,” Moore advised.

“I think my daily intake was three Snickers bars a day,” Moore added.

Memories of a Lifetime

Completing the Appalachian Trail isn’t as much about physical conditioning or prior backpacking experience as it is about raw determination. That was the case with Denton whose slow pace dictated early starts and late finishes. Moore suffered stress fractures to both shins negotiating a long, steep downhill slope, which resulted in ten days of forced rest.

Yes, there are challenges on the Appalachian Trail. But ,according to these hikers, the rewards far outweigh the difficulties. Lifelong friendships are made on the trail, bonds that connect people who appreciate the decision to make the arduous 2,200-mile walk.

Moore hiked the second half of the trail with a group of close friends—Team Party, as they called themselves. It’s twelve years later, and they still keep in touch.

Denton once met up with an 80-year-old thru hiker.

“I thought, ‘Man, I’ve found somebody I can hike with because he’s going slow like me.’ We bumped along for a while, then all of a sudden he was like the road runner—beep, beep, ptewwwwww!”

Mindfulness teaches us to live in the present, to notice details and be grateful. On the AT, a hiker’s schedule is cleared by five million steps, one foot in front of the other. There are a lot of mindful moments.

“On the trail I kept having childhood memories—stuff I’d never thought about before,” says Denton. “Maybe that’s the reason I was so slow—my brain was going faster than my feet. You think about stuff you did and some stuff you wish you didn’t do. A lot of people are running away from stuff.”

“For me, the trail made me live in the moment,” says Moore. “Every day is its own. Don’t take it for granted.”

By Katie Tims- The Bolivar Bullet