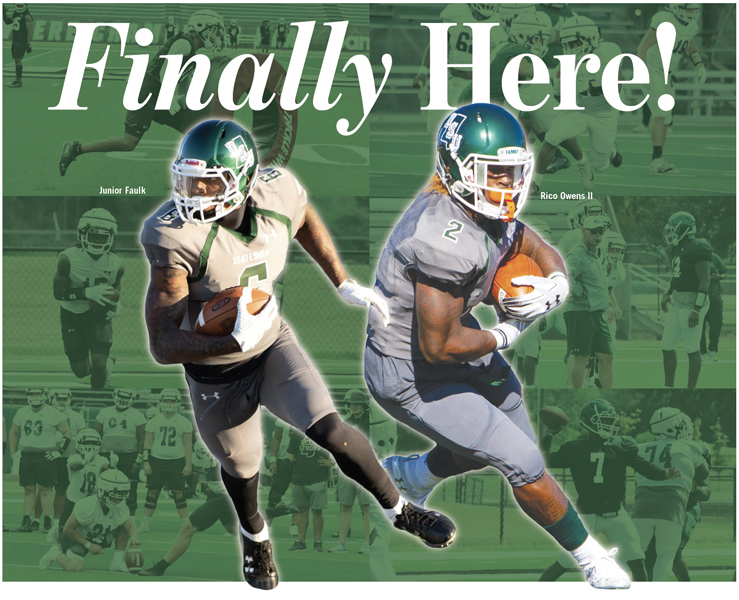 Delta State to have football for first time since 2019

In just eight more days, football will be back under the lights at Travis E. Parker Field at Horace McCool Stadium.

On Sept. 2, the Delta State University Statesmen will open the 2021 season against the Bethel University Wildcats. The Statesmen haven’t played an official football season since 2019 when they went 6-4 overall and finished third in the Gulf South Conference with a 5-3 conference mark. In 2020, the football year was canceled due to concerns from the COVID-19 pandemic.

The Statesmen have been putting in their work as they had a Green-and-White scrimmage in the spring and have had plenty of good practices in the fall.

Delta State Head Football Coach Todd Cooley, who is entering his ninth year with the school and eighth on the field, has been pleased with the conditioning and the progress of the team.

“I think we look okay,” said Cooley. “We’ve got a long way to go, but I think we’re a little further ahead than what we were, possibly, coming into the ‘19 which was the last time we played. I like where we are and I like this group.They work hard and have stayed pretty healthy, knock on wood. We’ve stayed away from the major injuries so far.”

Overall the years, the players on the football team have bonded as a family. The players in the program have always prided themselves on being a family.

Cooley loved the way the players have interacted with each other as the season gets closer.

“They’ve been a joy to be around,” said Cooley. “I think they’re coming together nicely. They like one another. There’s a lot of carry over from the spring and into the fall. I think a lot of that had to do with the fact we had such a large attendance here in July, and guys are in pretty good condition. I like where we are right now.”

“They base a lot of it off what we’ve got coming back from the 2019 season,” said Cooley. “We finished third in the league in ‘19.  This is not where we want to be obviously. I don’t put a lot of stock in preseason stuff. At the end of the day, we’ve got to try and beat everybody in the league, and they’re going to try and beat us. It’s going to be a tough row to hoe, and it’s going to be a dogfight every week.”

The two players leading the way at quarterback are Patrick Shegog (Jr.) and Cole Kirk (So.). Shegog was named GSC Co-Offensive Freshman of the Year in 2018. Shegog’s playing time was cut short in 2019 as he suffered a broken collarbone during the third game of the year. In his career at DSU, Shegog has completed 203-of-351 passes for 2,074 yards with 12 touchdowns and 12 interceptions in 13 games. He’s also rushed for 694 yards with five touchdowns on 178 career carries.

Deion Dampier (Sr.) and Rico Owens II (Sr.) are DSU’s top returners at running back. Owens rushed for 631 yards with eight touchdowns on 91 carries, while Dampier ran for 525 yards with two touchdowns on 128 carries in 2019.  Owens is a Preseason All-GSC selection.

“It’s a pretty deep unit,” said Cooley. “I’m pretty excited about where we are. I think we’ll have eight guys that can play really good football.”

On defense, defensive back Junior Faulk (Sr.) is a top returner that’s had a great career at DSU. Faulk was a C-Spire Conerly Trophy finalist and a second-team All-American in 2019. He is a Preseason All-GSC selection this year.

The Statesmen will have a lot depth in the secondary. Along with Faulk, Pat Lee (Fr.), Dayreke Snow (Sr.) and Sirvares Snow (Sr.) are looking strong as defensive backs. Free safeties Ty Woods (Sr.) and University of Louisville transfer Lamarques Thomas  (Sr.) have been putting on a show in camp, Jaquan Henderson (Sr.), Bernard Thomas (Jr.) and John Boyd (Sr.) have been competing in practice at the dog position, while Sherrod Paige (Jr.), Tim Hall (Sr.), Joseph Stone (Sr.) and Brandon Williams (Sr.) are working hard to see who will play the rover spot.

Emanuel Barber (Sr.), Marvin Terry (Sr.) and Dante Williams (Sr.) are linebackers that are performing at a high level in practice. Williams is a Preseason All-GSC selection.

On the defensive line, Zane Samuel (Sr.), a preseason All-GSC selection, will be counted on to contribute in a big way. Samuel has had to battle a minor knee injury, so DSU  has had to be careful with him at practice. Faulk has also been battling a hamstring injury.

“There’s no major injuries,” said Cooley. “We’re trying to get everybody healthy over the next few days.”

Stanley Talley (Sr.) and Tim Williams (Sr.) are expected to do good things on the defensive line as well.

In the kicking game, Parker Burleson (So.), Connor Mantelli (Fr.) and Dylan Liska (Fr.) are competing to see who will be the starter at punter and place kicker.

After the game on Sept. 2, the Statesmen will host McKendree University for Pig PIckin’ on Sept. 11.The Statesmen will hit the road to Carrollton, Ga. on Sept. 18 to play West Georgia to open up conference play. DSU is 4-0 in season openers at home during Cooley’s tenure.

“I think it’s awesome,” said Cooley about opening at home. “I wish we could play all of them here. I think it’ll be great for our fans to get back in the stadium. I think it will be awesome to see the levee area and the excitement come back. It will be big for our school and our community to start the football season at home. You don’t have to worry about traveling early in the season.”