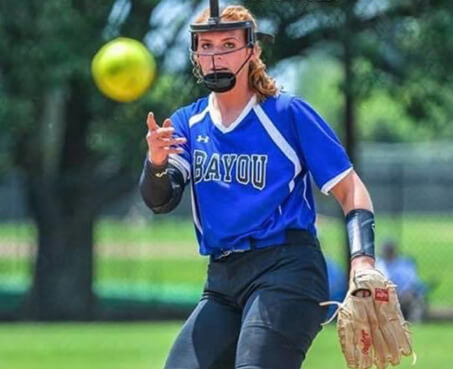 Five Lady Colts will continue their softball prowess at the college level.

A family loves, forgives, endures and celebrates the highs and lows of life. The 2020 edition of the Lady Colt Softball Team at Bayou Academy came close to a state championship only to fall short in the finals. They had done the same two years earlier. With excellence comes reward and for five players, that means signing on the bottom line to continue their playing careers on the collegiate level. Madison Jenkins, Emma Short, Reilly Kate Lack, Mary Scott Lofton and Laila Byas have all signed on the bottom line with four JUCO schools and one NAIA.

Head Coach Lauren LaSuzzo and Bayou Athletic Director Flip Godfrey couldn’t be happier for them as they’ve worked hard to attain their dreams.

“The girls softball program runs itself. Coach LaSuzzo has done a great job for years. Not only are they good softball players, they are fine student athletes and fine people. That’s the kind of people we went here,” says AD Godfrey.

Coach LaSuzzo added, “I hate to lose them. As a group as a whole, it’s been a pleasure to coach them. It’s been an honor to watch them grow up at Bayou. For me they’ve left huge, huge shoes to fill for those coming up in the program. They left their mark and they left the program better than they found it. I have no doubt in my mind that at the next level, they are going to be great leaders.”

“I’ve been playing since seventh grade and we’ve come a long way since then,” center fielder Lack said, “We are like one big family—sisters on the field and sisters off the field. We love each other and love to play together.”

Lack is anxious to get to Moorhead but looking back on her career, she picked the win over Leake Academy as one of the most memorable highlights.

“It was a team effort. We beat them and we were really proud of that,” she said.

Traditions of sleepovers before games and riding to the field with music blaring come to mind for Lack. She’s got plans to be a General Studies major at Moorhead and then find an esthetician school to attend.

Short, who plays catcher and third base, enjoyed the closeness of the whole team.

“The love each person has for each other and the chemistry of the team is amazing,” says Short. “Every girl on that team will do anything for each other. All the practices and talks in the dugout are things I’ll miss. My favorite memory is when we won the game to play in the state championship, it was fun celebrating and having a dog pile. We didn’t think we’d make it to the championship this year because we just moved up a division.”

Short will seek a Physical Therapy career while at ICC.

Second baseman Lofton had other offers before deciding on MDCC with Lack. She’s thinking about ultrasonography as a career. But she’ll miss the family she’s been part of.

“We hang out a lot on the weekends together as a team,” said Lofton. “The thing I think about most are the sleepovers and we always have a pool party. My favorite memory was hitting a home run against Brookhaven in the state tournament. That caused us to win the game and move on.”

Jenkins, a pitcher and first baseman, had offers before deciding on ICC. She has loved being a member of the team.

“Just being around the girls every day, when you have good team chemistry, you do things together off the field,” she says. “Having a coach that made me into the player I am today, I’m grateful for that.”

Byas, a leftfielder, hits left-handed and had other offers as well. But ,she knew where she wanted to go and major in psychology.

“It’s Christian based and a small college where I can really focus,” says Byas.