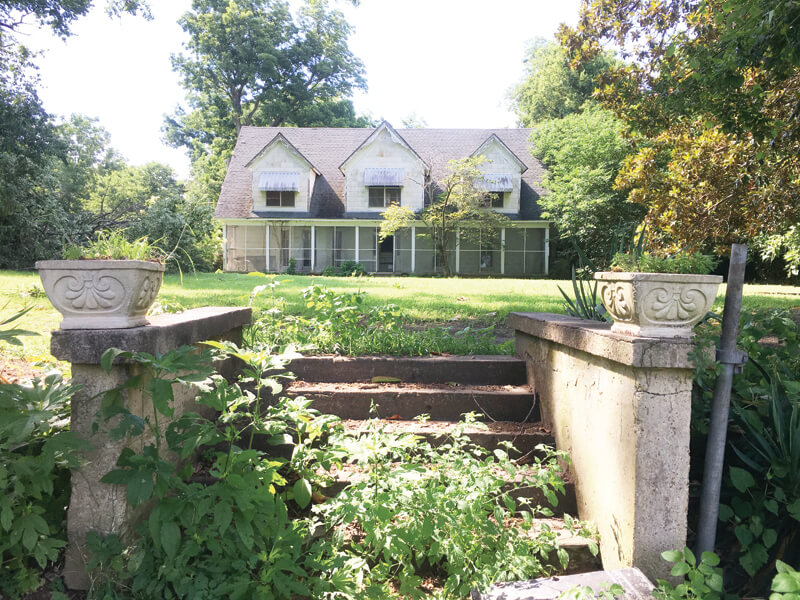 One of the most beloved Delta treasures is the Blanchard-Harris House and Mounds. “The Mounds” as it is also known is claimed by many to be their secret place where they can come and just experience the majesty and beauty that is so uniquely the Delta. Part of that experience is the journey itself. Located outside of Perthshire, the location is far off the beaten path. Newcomers to the property often think they are completely lost when suddenly the long winding dirt road makes a turn and becomes the driveway to the home. The first view is nothing short of magnificent.

The most dominant feature of the property is the tiered Native American mound system. There are three large conical mounds along with a rectangular mound. One mound is beautifully covered with lush grass and flowers when in bloom. The second mound is very hard to get to as it is covered with vines from an old muscadine vineyard that was left to go wild and got out of control.  Atop of the third mound is a historic old cemetery with an elegant wrought iron fence which encloses beautifully carved headstones and an imposing twenty foot tall marble obelisk. The rectangular mound supports the former family home which has been dated back to the Civil War era. There are two other structures on the property, an old carriage house and a cypress tenant house. Both of these buildings were severely damaged when they were robbed of their old cypress boards last fall. The Bogue Phalia with its towering cypress trees borders the front of the estate while the remainder of the grounds are graced with ancient magnolia trees sweeping low to the ground along with a vast assortment of other trees and bushes native to Mississippi such as persimmons, pecans, mulberry, fig, pomegranate, and bodock just to name a few. The backside of the property used to be a large pecan orchard and muscadine vineyard, but has now turned into a dark and mysterious woods perfect for exploring. As the property is so remote, it is home to all sorts of wildlife. All of these elements put together make for a magical place as is evidenced by the steady flow of visitors.

On a recent visit to the Mounds, I met up with Jessica Crawford who is the regional director of The Archaeological Conservancy which owns the property. This is a nonprofit organization that preserves Indian mounds. Jessica was with another archaeologist with the Conservancy, Nikki Mattson. They were examining and reburying the skeleton of a Native American that had become semi exposed due to erosion.  I was treated to an impromptu lecture of how they could tell the body had originally been buried under the floorboard of a Native American structure by examining the surrounding daub. From studying the soil patterns, pottery, and stone artifacts, Crawford said Native Americans lived at the Blanchard Site from approximately AD 1000 to 1540.

On the same outing, we were joined by artist Euphus Ruth from Greenville. Ruth is a photographer who was taking antique amber tintype photographs with his vintage camera. He has been taking photographs at the Blanchard-Harris House and Mounds for years. He also gave a demonstration of how to develop an ambrotype. It is a form of wet plate collodion process where you can watch the photograph appear on the glass as he dips it in the solutions. It was fascinating to watch and something you would totally not expect to see out in the middle of the country.

There was still another visitor that day. Artist Bonnie Jean Dillon of Cleveland was taking photographs for an art class. I am describing all the different people I encountered  on just a typical day at the Mounds. You never know who or what you are going to experience. There might be bird watchers, a film maker, or musicians making a video. It is such a uniquely beautiful place it draws both locals and tourists.

Some very interesting discoveries have taken place recently at the site. There have been rumors for many years there were graves belonging to slaves hidden in the thick brush. The Archaeological Conservancy is trying to clear the mounds, but it is a huge undertaking. However, Jessica did research two graves which are just outside of the cemetery gate and found they belonged to former slaves. One was a thirteen year old slave who ran away to join the Union Army and then came back to farm as a free man where he had once worked in bondage.

The history to be found at the Mounds is amazing. When I first discovered the property seven years ago, I immediately became enchanted like everyone else. But, being such a history lover, I began to research and learn of the mysteries that had long been silent. Through conducting oral histories and working with many others who love history, we were able to discover the country western music and film star Dale Evans had spent every summer at the Mounds. In fact, this is where she learned to be a cowgirl as her grandparents had extensive stables. Edwin Harris was a very renounced horticulturist who patented several fruits and nuts. He was responsible for the vast number of native plants and trees. The Blanchards had the very first golf course in the Delta. It had nine holes with the last hole being on top of one of the mounds.

While the Blanchard-Harris House and Mounds has a rich past, its future is not so certain. While The Archaeological Conservancy will maintain the mounds and the cemetery, what will happen to the structures is unknown. Two fundraisers to try to save them are being planned for late summer and fall. First up will be a music festival on the mounds. Then, there will be a gathering to celebrate the work of renowned artist Emma Knowlton Lytle who is buried in The Mound Cemetery. Miss Emma’s documentaries Raising Cotton and Mule Races which depicted life in the Depression-era Delta will be shown outside while showcasing some of her paintings and sculptures inside. More information will be forthcoming.

By Nancy Armstrong– The Bolivar Bullet