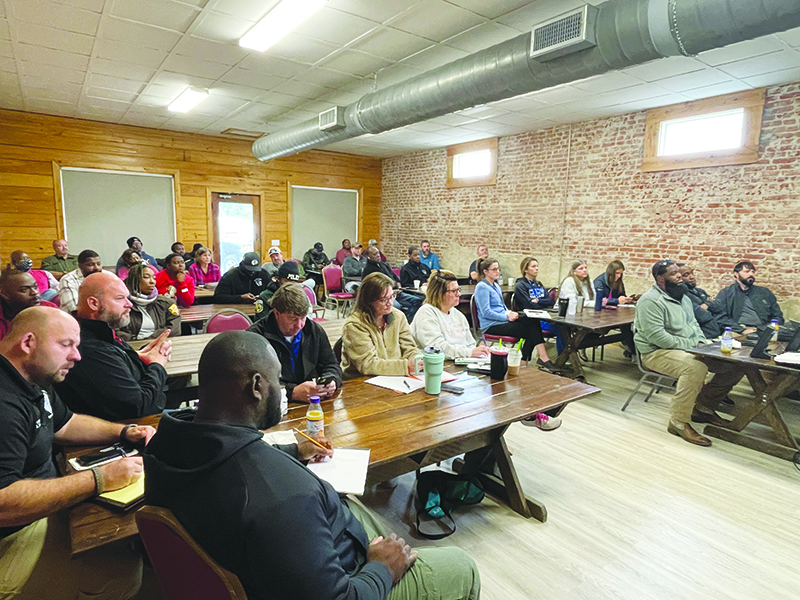 A meeting was held recently in Boyle for law enforcement members providing recertification for the administration of Narcan (the opioid antagonist used to reverse the effects of overdose) as well as other updates on legal issues that officials needed to be aware of on the job. The meeting was co-sponsored by the Boyle Police Department and the Mississippi Bureau of Narcotics and had representatives on hand from the Mississippi Health Department as well as Daniel Dunlap, from Mississippi’s Alcoholic Beverage Control.

Boyle Police Chief, Murray Roark, also said that the meeting was called to cover updates on the new medical marijuana laws and issues surrounding it, including search and seizure, “We needed to get a clearer presentation of current statutes,” said Roark. Mississippi Bureau of Narcotics Commissioner, Steven Maxwell, was one of the speakers on hand to provide updates to the officers present, as were Captain Jeff Overstreet and Lt. Colonel Lisa Conkron from the Bureau.

Roark said Narcan–which is administered like a sinus spray–has to be stored at police headquarters due to certain temperature demands. “When we get a call and realize we probably need to carry it with us to administer, our officers will take what is needed,” said Roark, adding that he himself had revived two people over the past year through the use of Narcan. “In both cases, the individuals were completely gone. Had I not been there, they probably would not have survived,” said Roark, adding that the problem of fetanyl and other opioid overdoses are a major problem nationwide, including smaller Delta towns like Boyle.

Roark said that he and his three officers, as well as two secretaries in his office, had to undergo recertification on a yearly basis, even though Narcan is widely available for purchase to the general public. “As public officials and employees, we have to have certification to administer it,” he explained. “We take and complete an online test and that allows us to stay up-to-date.

Also discussed at the meeting was medical marijuana (which Boyle opted to participate in to sell), and its use among the public, including how to spot if someone is under the influence and various laws pertaining to the new legalization of the product.

“John Conaway, an expert from the Health Department who specializes in this field, spoke to us about medical marijuana as did members of the legal teams from both the Health Department and the Bureau of Narcotics,” said Chief Roark. “For example, if a person has a prescription for medical marijuana it is, then, legal for them to use it for those purposes. They cannot, however, get behind the wheel or be impaired in public in any way–that remains illegal,” continued Roark. “In those situations, we treat the individual just as we would someone we suspect of drunk driving–by administering various sobriety tests.

“We came away from the meeting with, not only recertification in Norcan administration, but also a much clearer picture of what we can and cannot legally do under the new medical marijuana provisions and protocol,” said Roark. “It was a much-needed presentation and we learned a lot from it.”