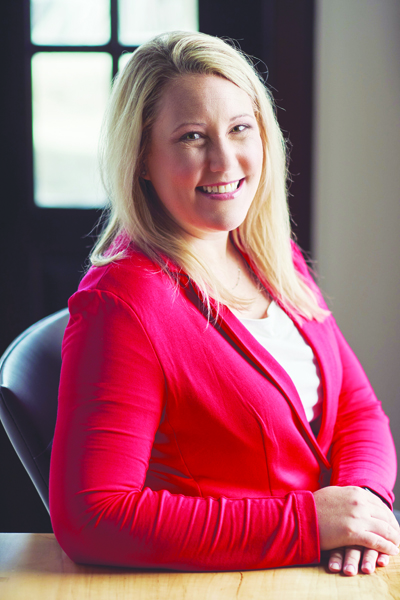 Lara Bowman has been named the new CEO of the Cleveland/Bolivar County Chamber of Commerce, replacing longtime head Judson Thigpen who officially retired in September. The Poplarville native will also act as the Economic Development Director for the organization. Her official start date is November 16.

A 2008 Mississippi State University graduate in Communications, Bowman went on to obtain a Masters Degree in Business Administration with a minor in Economics and became certified in Economic Development. Upon graduation, Bowman worked for the Department of Navy at the Stennis Space Center on the Gulf Coast in the Human Relations department. “It was not really where my passion was, though,” admitted Bowman, so she and her husband moved to Choctaw County where she ran their Chamber of Commerce for over a year before taking a job with the Mississippi State University Extension. There she worked with small businesses across the state implementing technology solutions, from social media maximization to credit card payment options.

After two years with MSU, Bowman was involved with starting  and building a totally new regional economic development organization for Choctaw, Webster and Montgomery Counties. “I did that for five years and it was very challenging. But it was also a great experience for me and very fulfilling to build such an organization from the ground up,” said Bowman. And then the opportunity in Cleveland appeared.

“Everything has been happening so fast,” laughed Bowman. “I had been to Cleveland on many occasions while working with the MSU Extension and had always loved it here and knew the potential this city and county had and the wonderful people and leaders here. There are so many great opportunities here in Bolivar County with a port, Entergy certified sites, Delta State, strong existing industries–the list goes on. I knew there were many assets here that could be utilized from an economic development perspective.

When I was approached in September through VisionFirst, I jumped at the opportunity to be considered. I interviewed with the search committee in Cleveland and immediately knew that our visions meshed. I heard the strong desire to move the community forward and realized it was a good match,” continued Bowman. “That was pretty special for me. I’ve worked with a lot of boards and committees and you don’t always get that level of commitment and enthusiasm like I picked up on in Cleveland–I could tell that these were the kind of leaders I would love to work for and alongside with.”

Her vision for Cleveland and Bolivar County? “Cleveland is one of the best cities in Mississippi. Truly. The potential is unlimited. I want to start off listening to the citizens here, getting their feedback and concerns, and finding out how best to develop what we already have–which, again, is a lot. I’m in an unbelievably good position and look very forward to getting to work.”

Bowman said she believes that Cleveland is “really where I belong and want to be. I believe that. This is a community where I can grow along with the community I will be serving.”