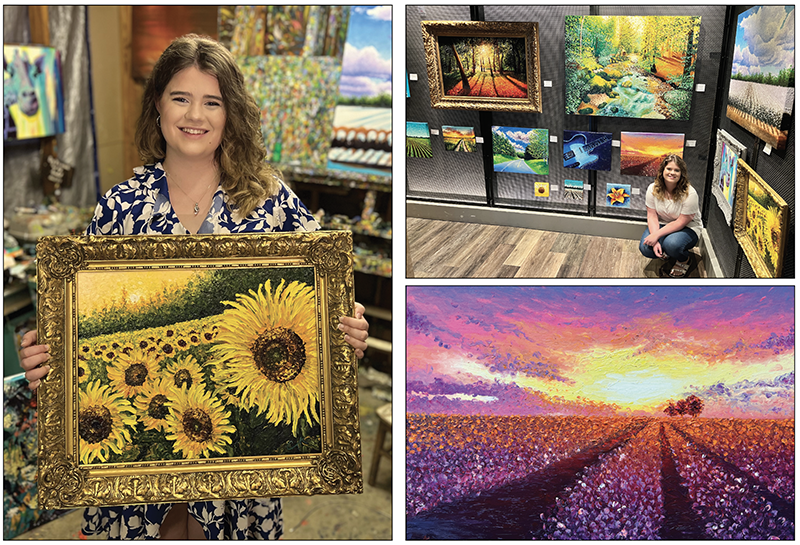 “Ever since I was little, I always had some musical instrument in my hands and have been creative for most of my life,” said Alford. “By the time I was eight years old, my grandfather took me to local country music jam sessions. After seeing my interest in music, he took me to my first piano lessons when I was eight, and I have not looked back. I discovered that music was my passion and that I never wanted to stop learning. Ever since then, I have been playing gigs, singing and playing my piano. I really got serious about songwriting about three years ago and started writing a lot of my own material,” she said, naming the work of Carole King, and also Contemporary Christian artists, as her main influences.

Besides her music, Alford currently has an exhibit of her art on display at The Cotton House Hotel in downtown Cleveland where her work is also on sale. The exhibit, with roughly 20 pieces on display, has been open since October 7 on the hotel’s first floor/lobby.

After several years of learning new musical instruments such as the ukulele and guitar, my creativity expanded into making artwork when I was about 15,” she said. “I began playing with paints and canvases and exploring my new wave of creativity. During this time, my brother recommended that I should watch the famous PBS television artist, Bob Ross. Watching his hands and brushes as he created his work instilled a desire for me to try it for myself. After several weeks of watching his YouTube videos, my father bought me one of his oil painting kits, and that began my obsession with creating art–which has now expanded into finger painting,” added Alford.

“I started developing my own style and vision,” she said. “With my work now, I create pieces of art that are filled with vibrant, bold, and lush color. Not only do I paint with bright and vivid colors, but I add a twist–I don’t use any brushes! Almost all of my current works are 100% finger paintings. When I tried this technique, I fell in love with it almost immediately. I could hold the paint in a way I never thought possible, and it allowed all of my colors to retain their vibrancy. Finger painting allowed me to blend the paint in such a way on canvas that a regular brush or palette knife could never blend and I found it an amazing technique. I’ve probably created hundreds of these types of works.”

Currently a junior at Delta State University and majoring in Entertainment Industry Studies, the homeschooled Alford appears to have her future planned out. “After I complete my courses, I plan to continue to work on my creative endeavors as well as enroll at Delta State University again to achieve my MBA,” she said. The Greenwood native wants to go into the entertainment business while continuing her own career, also planning to release an EP of music in the spring of next year.

“I’ve been working on combining my art with my music, having specific pieces and songs be intertwined, telling the same story through the two different mediums,” she said. “That’s what the EP will represent for me.”

Alford said her artwork prices range from $15 to smaller pieces up to $1300 for larger ones. She has also been commissioned by patrons to produce several art works, she said. “I’m actually working on four commissioned pieces right now and three are portraits.”

For more information on Christina Alford’s career and work, go to her website www.christinaalford.com