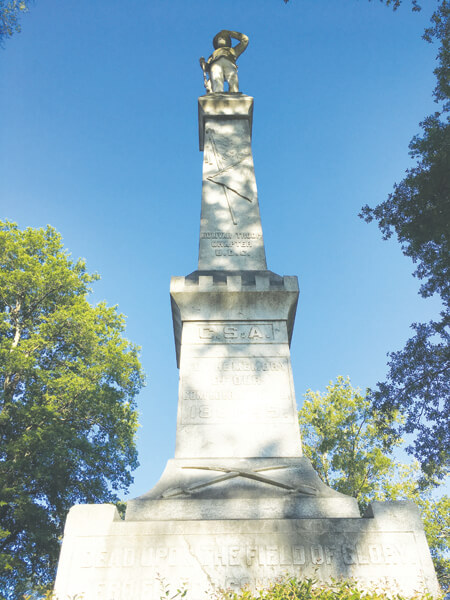 The Board of Supervisors held its regular meeting this past Monday and a discussion took place concerning the removal of the Confederate monument from the grounds of the Bolivar County Courthouse in Cleveland.

“We’ve had several people who have been concerned [about the Confederate monument], and I guess rightfully so with the divisions going on in our country around race relations. Of course, we want to do everything respectfully and legally,” said Board President Larry King.

The supervisors voted to authorize the board attorney to look into what legal steps would be needed to remove the statue if the board votes to do so.

District one Supervisor Jacorius Liner agreed with taking this step.

“I’m totally on board with the attorney looking at what legal steps we can take to have that removed off county property because 400 years of bondage, slavery, discrimination, bigotry and apartheid is something that we just don’t want to represent in this county,” said Liner.

In other board updates, county engineer Josh McPherson told the board the bridge over Six Mile Lake west of Mound Bayou is now open.

Prior to its repair, that bridge has been out of service for nearly four or five years, said supervisor Olanda Morton. Citizens have been using a gravel road to get to their homes and into town.

“It’s been a long time coming for us in getting this bridge completed, so I’m sure the citizens are very happy about that,” Morton said.

During the meeting, Supervisor Liner asked if the road manager’s department would continue to clean up debris from the storm that hit on Easter.

“I’m still getting calls from mayors regarding debris pickup from the storm. We want to make sure that we go ahead and get that done. It’s been a couple of months now from the storm and a couple of municipalities have stated to me that debris not being picked up can present hazards for kids in their communities,” Liner said.

EMA Director William Quinton also updated the board that Bolivar County has 18 more Coronavirus cases than it did last week, bringing total cases to 185.

The Board of Supervisors will meet again on July 6 in Cleveland.