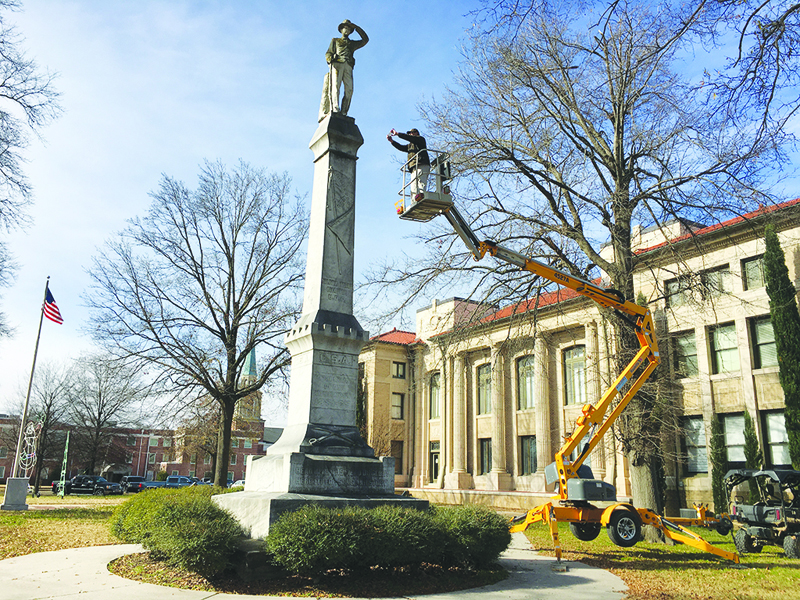 However, many unanswered questions remain

After the Bolivar County Board of Supervisors voted to remove the Confederate monument in front of the Cleveland courthouse last year, residents are still waiting to know when the statue will actually be moved. And, just as importantly, the location to where the statue will be placed and who will be responsible for the cost to move it.

The process began when Bolivar County Supervisor Jacorius Liner and Board President Larry King made the motion last year to remove the statue. No other supervisors voted against it.

Last July, protesters demanded the Confederate statue be removed. A group of about 20 people marched to the monument on July 3rd demanding that the statue be removed and that no county or city dollars be used to remove The group also demanded that it be replaced by a monument honoring Black liberation commissioned by a Black artist from Bolivar County.

The monument in Bolivar County was erected in 1908.

Josh McPherson, with Eley/Barkley, P.A., Engineering + Architecture, Bolivar County’s engineering firm,  says his company is solely and only involved in the permitting process for removal and nothing else.

“The Courthouse is listed as an historic landmark,” said McPherson. “And, any time modifications are made to or on it–from removing a statue to paint a wall–it has to be approved by the Mississippi Department of History and Archives. That’s where we’re at now. We’re awaiting a permit to commence work. We’re also following former procedures from around the country, like the Confederate statue at Ole Miss being removed, to submit the same types of documentations and permits needed to the Department of Archives and History. We submitted these about three weeks ago. This process may take several months though and we’ve conferred with other engineers who have gone through this. Right now, there’s discussion of an effort to place the statue in Concordia Cemetery, the oldest cemetery in Bolivar County, with a number of Confederate graves. It’s located north of Gunnison on the base of the river levee. The statue itself is not of a particular soldier or leader–it’s just generic. We at Eley have been entrusted to readying all of the documentation but the actual work of removing would have to be contracted out for the relocation. We would assist with the bids for those potential contractors.”

However, according to a representative with the Mississippi Conference of the United Methodist Church–the overall body of all Methodist churches in the state–no one from Bolivar County has reached out to the organization.

The former Gunnison UMC church closed about a year ago and was subsequently sold to another non-denominational church. According to a representative, the cemetery is still owned by the MS Conference of the United Methodist Church. The MS Conference of the Methodist Church have indicated if they receive a request for the statue be placed in the Concordia Cemetery, they will not approve this.

The Bolivar County Courthouse is a designated Mississippi landmark, and was named as such in 1985. It was placed on the National Historical Registry in 1999 so, as such, all work has to be approved by the Department of History and Archives, including any movement of the statue.

It has been assumed that Bolivar County taxpayers would pay for the cost of the statue’s removal. However, some say it’s very cost-prohibitive. One question that has also been asked is who funded the statue to start with and apparently it was funded by Bolivar County in 1908 and put up with the county’s approval. Some are of the mindset that the Board of Supervisors would also have the right to remove the statue in the same manner: if taxpayer dollars paid for it to be placed in front of the Bolivar County Courthouse, then taxpayer dollars should be used to take it down. Another question that has been asked is whether or not private money could bid on acquiring the statue.

The Bolivar Bullet acquired the letter to Eley/Barkley, P.A. Engineering + Architecture regarding the removal. It reads as follows: “Thank you for your inquiry regarding the potential relocation of the Bolivar County Courthouse Confederate Monument. The Bolivar County Courthouse was designated as a Mississippi Landmark in 1985 and listed in the National Register of Historic Places in 1999 for its historic and architectural significance.   Under provisions of the Antiquities Law of Mississippi, because the monument is publicly owned and part of a designated Mississippi Landmark property, a permit from the Board of Trustees of MDAH is required prior to any alterations that would affect its historic character. The property owner must submit a Notice of Intent—including detailed plans and specifications for the alteration—to MDAH staff who will review the project to ensure it meets the Secretary of the Interior’s (SOI) Standards for the Treatment of Historic Properties. If the project meets the SOI Standards, staff will recommend that the Board of Trustees of MDAH vote to approve a Mississippi Landmark permit for the proposed project. If the project does not meet the SOI Standards, staff may request additional information or recommend changes to the scope of work.”

As far as the actual costs to move the statue? The cost could be as high as  $100,000 to $300,000, close to the amount incurred by the University of Mississippi when a similar Confederate statue was removed.

The statue was hand-carved in Italy, according to McPherson.

“Apparently, a company in Italy was churing these types of statues out, and the one in Cleveland is almost exactly like the one removed from the Ole Miss campus–it was made by the same company.”