Dedicated to the Community 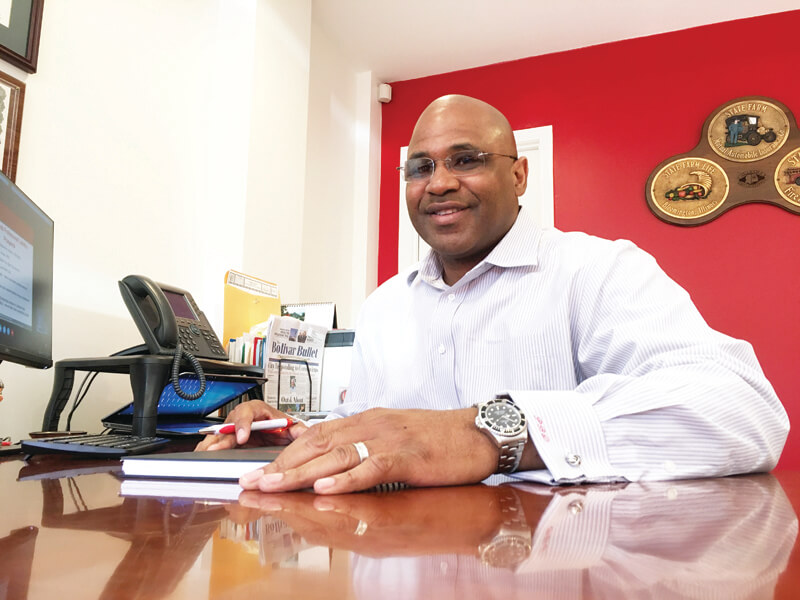 Patrick Davis is Delta through and through.

Born in Cleveland and raised in Greenville, both sides of Davis’ family are from the Cleveland area, although he split time between the two towns growing up.

“I had two sets of friends,” he laughs. “I grew up in Greenville, but my ‘weekend warrior’ buddies were in Cleveland!”

A resident of Cleveland since 2009, the Delta State University graduate is also the present National Alumni President for DSU.

“I received a BBA in General Business from Delta State with accounting, management and CSI as my emphasis in studies,” said Davis. “I came to Delta State from O’Bannon High School in Greenville.”

Davis says he has been in the insurance business for most of his adult working life except for one detour—a blip he says he can’t forget.

“I never took a single course at Delta State concerning insurance,” said Davis. “But, towards my senior year, I had to do an internship and went to a job fair on campus where I was offered work from Northwest Financial—now Wells Fargo—and State Farm. However, I wanted to graduate immediately, so I finished school in July,1995 and State Farm had the flexibility I needed to offer me a job and I took it. So, I became a claims representative that year and ended up working in Birmingham for a number of years in underwriting management before moving back to Cleveland.”

Davis says he is not an actual employee of State Farm, but is under a contractual agreement to exclusively sell only their products. “An owner-agent,” he clarifies. His office has been located in downtown Cleveland since 2010.

“When I got into the leadership and management echelon of State Farm, I realized a few things,” Davis observes. “You would get evaluated by your boss, but you couldn’t have a conversation with him or her about the specific things you thought you had done, or had brought to the table. That’s why today, with my own employees, I encourage them to bring forth what they have contributed to the business and what they have accomplished—speak their minds. I strongly believe that is a very important component of a good business, insurance or otherwise—hearing out your employees.”

So, what makes Patrick Davis and his business different from others who offer similar products?

“Look, we really listen to our clients,” he answers. “We don’t sell solely on price. We give them options. Certainly, we don’t talk in insurance jargon—we speak on the level they are comfortable with. Because of that, honestly? My clients start to feel like family. They trust us because we level with them and speak the truth.”

With a current staff of seven, including himself, Davis says he serves clients throughout the state and in Tennessee—not just solely in Bolivar County. However, when it comes to hiring employees, Davis is proud to say his staff is comprised of all Delta State graduates and that he goes out of his way to present opportunities to his DSU graduates.

Married to his high school sweetheart, Tomeka—also a Delta State graduate—the Davis’ are set to celebrate their 22nd anniversary at the end of this month and have two children: Courtney, a DSU grad, who worked with her dad while as a student, and Patrick, Jr., who is currently studying at the historic Morehouse College in Atlanta. “But he does have some credits from Delta State,” Davis laughs.

When asked what he loves most about Cleveland, Davis says simply, “It’s home. Not many people in my profession get to go back to their roots and grow their business, but I did. All of my family and childhood friends live here and I love it. I enjoy being involved in this close-knit community and wouldn’t trade it for anything.”

Finally, Davis says the COVID crisis has certainly challenged his business but that it is holding its’ own and staying true and responsive to clientele.

“We’re not accepting walk-in customers at this time, but we’re using Zoom, Skype and social media to interact with, and even file claims for, people,” said Davis. “We are adhering to all the guidelines that were given by the national and state officials, of course.