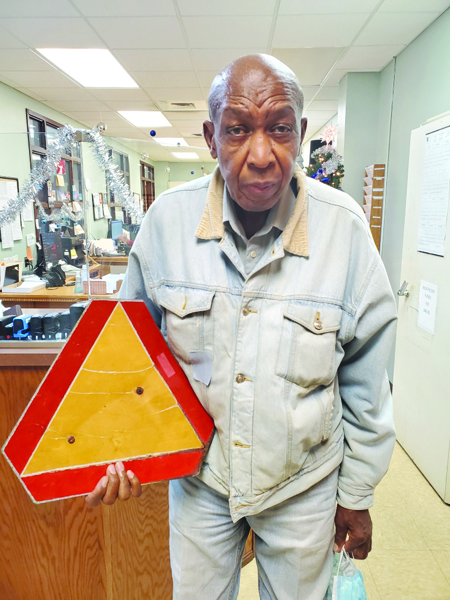 James White, affectionately known as Coach, has been teaching driver’s education since he retired 35 years ago from East Side High School.

A man born to work with children, White has taught and inspired over 4,000 people to get behind the wheel with confidence and complete knowledge of the rules of the road.

“I still get calls every day from across the Delta with people needing to know how to drive effectively,” said White. “I treat everyone equally – all races, sexes and ethnic backgrounds. I have taught people who were born out of the country, but moved to the U.S. Driving here is different than in other countries, so it is important to be able to know our system.”

Of course, this year has been different because of COVID 19, but it hasn’t stopped him from doing what he does best. “I gave them packets to fill out,” he said.  “They had to take quizzes online. They still learned all the techniques, but we weren’t able to actually get behind the wheel. While this isn’t ideal, it was all we had at the time. They still learned how to maneuver a car, how to drive it, and how to drive defensively.”

That is how White teaches – to drive the defense way – “the correct way,” as he puts it.

“I have stuck with this because people need to learn to drive,” he added. “They need to learn to drive the defensive way, which is the correct way. It is important that they are being a safe driver. That is why I do this. I charge the same amount to teach as I did 20 years ago. Besides, I’m on the road too. I need them to be able to drive safely.”

White said the purpose is to try and save time and money and protect their lives and the life of someone else. Driving has changed over the years as a luxury to a necessity, so there are more cars and people on the road.

A lot of prep work goes into driving before anyone gets behind the wheel. “I try to build up their confidence before they get behind the wheel, indirectly and directly,” he explained. “I had a lady, she was 81 years old, and I taught her how to drive. You can learn at any age. I make sure to look at the positive things they can do. I try to push those positive things. I help them learn the best thing they can do in every situation. I want to know what is the most confidence in doing, and then work on what they aren’t. I show them techniques on how to control the car.”

Of course, it takes a little bit of nerves of steel to teach driver’s education. Every summer, a fresh crop of students and adults arrive and not all are naturals.

“I was telling my friend the other day about an experience I had in Boyle,” he said laughing. “I had a lady from India in my class. I was teaching her the basics. We were approaching an intersection. I was paying attention to her, but didn’t exactly understand what she was saying to me. I kind of bowed my head in response, and she thought that meant go. Well, another car was coming and we almost had an accident at the intersection. If I hadn’t hit on brakes, we would have wrecked. In the cars we use, we have side brakes and the ability to intervene if need be. I never use body language anymore, I can tell you that.”

White said such things can happen and it is his job to be prepared. That’s why he and his students spend ample time at the old driver’s range at DSU, parking areas of his church, all off the roadway with no traffic until they are 100 percent able to use the Smith System. All of those principles must be mastered even before he allows a driver to physically drive a car.

White is good at what he does. In fact, White was selected to participate in the Citizen Ambassador program of People to People International. The program was created in 1956 by President Dwight D. Eisenhower for the purpose of professional, scientific and technical exchanges to strengthen relations and create good will among people of the globe. According to White, he was one of 25 to 30 drivers education experts to visit Moscow.

The coach was the first teacher to have perfect attendance for five consecutive years in the Cleveland Public School System. He was also the first teacher from Bolivar County to be selected to the Wall of Tolerance at the Martin Luther King, Jr. Building in Atlanta, Ga. Before retiring, White coached baseball, football and basketball, and laid the foundation for  swimming, golf, cross country, track, tennis and softball at East Side High School.