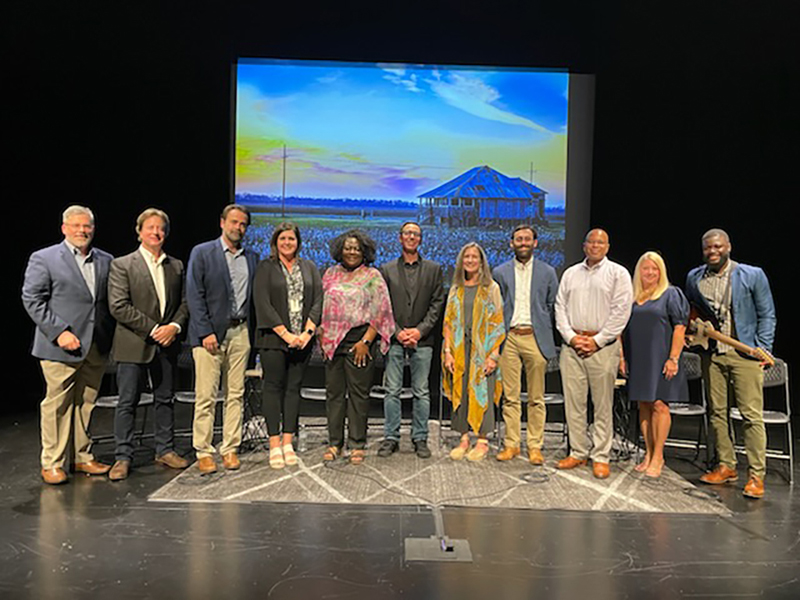 “How Does The Delta Win More Tourism,” the theme of a forum held at the Grammy Museum last week, is being hailed a success. The event, sponsored by the Mississippi Press Association, the Mississippi Humanities  Council, and locally by The Bolivar Bullet newspaper, was well-attended despite torrential rainfall. The event was also live-streamed for a viewing audience.

Layne Bruce, the Executive Director of the Mississippi Press Association and one of the panelists at the forum, stated that he was very pleased with, not only the event, but also the MPA’s involvement working with similar organizations around the country to sponsor such events in other towns nationwide.

“To start off MPA’s series of statewide events like this was exactly what we planned and wanted,” enthused Bruce. “It’s so critical that our locally-owned newspapers around the state and the country–like The Bolivar Bullet–engage the communities with discussions and forums like the one we had on tourism here in Cleveland. A number of ideas were discussed by knowledgeable and impassioned minds in the field and I think it’s correct to say this forum will bear fruit for Delta tourism. Scott Coopwood did an impressive job in getting this event together and the MPA was honored to be a large part of it coming into fruition.”

Tom Silvestri, Executive Director of The Relevance Project based in Richmond, Virginia, was also in attendance as his organization works with similar groups to the MPA around the country to support local journalism and community outreach through forums such as the one held in Cleveland. .

“This marked my first time in the Delta and, I can tell you, I was impressed–and will be back,” said Silvestri. “I loved hearing from the experts, getting their opinions and sensing their dedication. It was truly inspiring.”

Market attendees can expect new and returning vendors like CS&S Nursery, Landscape and Farm, WildFlower Baking, Off the Vine, and Cypress Bread Co. at the kick-off weekend, with other groups joining in throughout the season.

“The Cleveland Farmers Market is such a special community event. It’s been around for at least 15 years and I’m still amazed that I come across people who live here who didn’t even realized it existed!” Betz added.