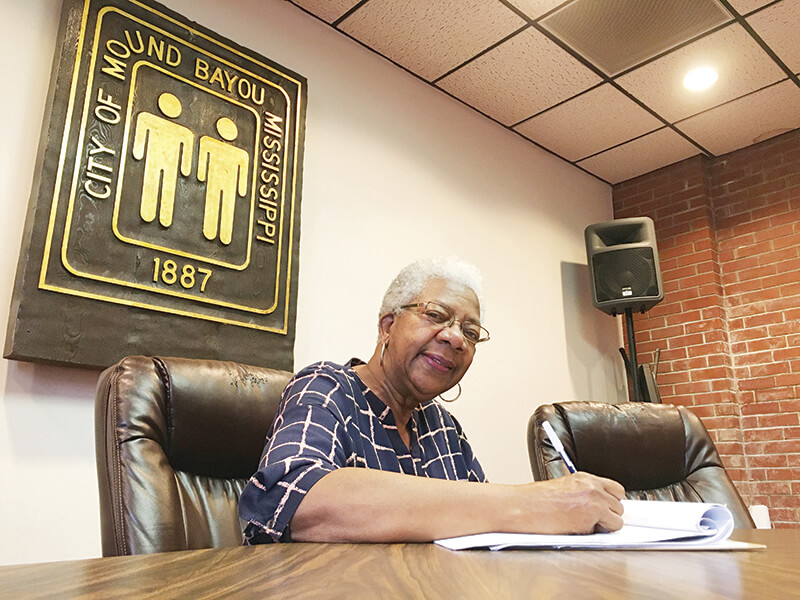 Working for the love of town.

“I had just come back home to Mound Bayou after having retired and leaving my job in education just outside of Detroit, Michigan, I simply wanted to just do something to keep busy,” says Dr. Eulah Peterson, mayor of Mound Bayou. “I teased my friends when I came back and told them my next job was going to be a greeter at Walmart. Of course, I was joking and never applied.”

Peterson did not win the first time she ran for mayor of her hometown of Mound Bayou. However, she was successful in winning the position on her second attempt. And, instead of just having “something to do” during what was to be her retirement,        Dr. Peterson is working hard in her role today to better Mound Bayou and bring more business to the town. She is also trying to increase the tourism numbers of those who are interested in the history of the town and that history is significant.

“There are so many people, even native Mississippians, who don’t know the fascinating and utterly unique history of Mound Bayou,” she says of the first independent African-American town settled in the U.S. and chartered by former slaves.

“We must do a better job of educating people about what this town stands for and what it means to the understanding of the history of our state and our nation,” said Mayor Peterson. “That’s why I believe as that education grows, more people will want to come to Mound Bayou and we will benefit from that economically and our visitors will benefit from the history they’ll learn and hopefully be inspired by discovering.”

The Mayor notes that many from all over the world have already done just that. However, she sees much room for more people to experience Mound Bayou’s history and its current charm.

Peterson was born in 1948 in Mound Bayou and grew up with six other brothers and sisters.

“I graduated John F. Kennedy High School as a member of the first class of graduates in 1965,” she said. “I remember only too well the tragic day our school’s namesake was assassinated. We were having our homecoming parade in Mound Bayou when we heard the news.”

After graduating from Philander Smith College in Little Rock, Arkansas (where, she notes, three of her other siblings graduated), Peterson began studying Education, with specific emphasis on Special Education and teaching mentally-challenged children. Her first teaching job was in Clarksdale in 1969 at George H. Oliver Elementary where she taught special needs students for two years before leaving for Ole Miss where she received her Masters Degree in Special Education. After Ole Miss, Peterson received a teaching position at Mississippi Valley State University and taught there for three years.

“I then went on to Southern Illinois University-Carbondale,” she said, “and received my Doctorate in Special Education Administration. Valley State had a joint project with SIU which is how I became familiar with their program.”

Mayor Peterson returned to Valley State for two more years before moving to Lansing, Michigan in the fall of 1979 where she taught at a junior high school.

It was then on to Highland Park, Michigan—a part of inner city Detroit—where she remained for the balance of her education career, some 22 years, teaching special needs high school students, Head Start director for one year, an assistant principal, Special Education Director for the entire school district and retired in 2002 as an elementary school principal—and these are just some of the positions and roles she held while in Highland Park. An impressive career, to say the least.

However, the Mayor says her plan was always to return home to the Delta, specifically her beloved hometown of Mound Bayou. She did that in 2002.

Peterson got involved in the Historic Mound Bayou Foundation and in 2005 she was first approached about running for public office as an Alderman. She was successful in her attempt and along with her Alderman duties she was also Vice-Mayor during the next four years.

Staying active in community involvement, most notably an economic/social justice organization for Black women affiliated with the Children’s Defense Fund.

In 2009, Peterson ran for mayor for the first time, unsuccessfully.

“After that, I kept myself involved in church and other civic activities,” she said. But the political bug would soon bite again.

“In 2013, I again ran for Alderman and won,” she said. “However, I resigned shortly thereafter for personal reasons. That decision didn’t sit well with my constituents, though and so I sought reinstatement. That was denied.”

This was not a deterrent, as another run for mayor proved successful for       Dr. Peterson and as she laughs she says, “Here I am today!”

In Mound Bayou’s 133-year history, Peterson is only the second female to hold the office.  Will she consider to run again when her current term is up? “Yes,” she answers emphatically.

“I am so proud of Mound Bayou,” she sums up. “It’s history and where it is today. There is work to do, as in so many other small towns in the nation. But, we are up to the task and the challenge.”