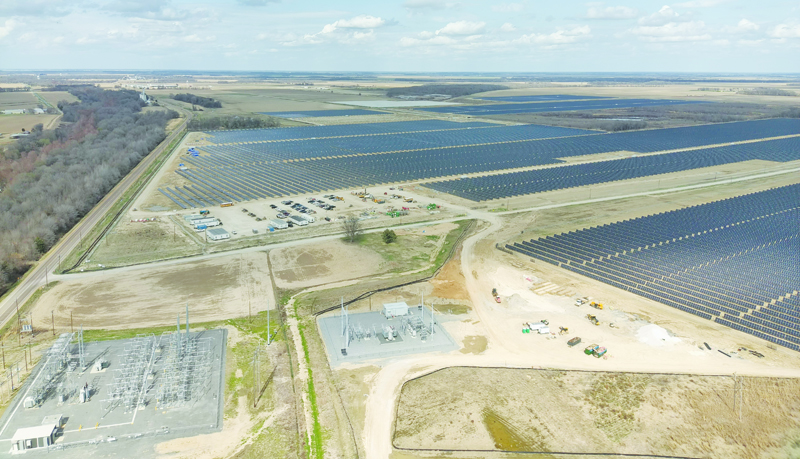 “It’s a historic day for Entergy Mississippi, our customers and our state,” said Haley Fisackerly, Entergy Mississippi president and CEO. “Powering communities is the heart of our business, and this power station does that in several ways–by providing clean, green power to customers and a hedge against rising natural gas prices, and giving industries with renewable energy goals an incentive to locate or expand operations in our state. This is our first large, utility-scale solar facility and it’s historic also due to the fact that next year, Entergy Mississippi will be celebrating its 100th year of serving customers in Mississippi. It’s truly amazing how far our company and industry has evolved in that time to where we’re now using solar energy to serve our customers,” said Fisackerly.

The emissions-free, renewable energy plant sits on approximately 1,000 acres in Sunflower County and connects to Entergy’s transmission grid in Ruleville. The plant is a single-axis tracking photovoltaic power generator with 273,000 PV modules.

“There will be over 271,000 solar panels deployed over the 1000 acres producing 100 megawatts of energy when it is fully producing electricity at any moment,” adds Fisackerly.

The solar station is also the first plant in what will be the largest expansion of renewable power in the state’s history, according to Fisackerly. Under a program called EDGE, for “Economic Development with Green Energy,” the company plans to replace some aging natural gas plants with 1,000 megawatts of renewable energy over the next five years. “Reaching out to our bigger customers and, also, our individual customers, we have heard more and more their desire to have renewable energy options available,” said Fisackerly. “In my 27 years here, I’ve seen our customers gaining a bigger voice in what they want vis a vis their energy needs, especially when it comes to sustainability and reducing their own greenhouse gases. That’s why we’ve retired a lot of our older plants and replaced them with newer, cleaner energy sources and this station is yet another step in that direction.

The Ruleville station, over its 30-year life, will provide $17 million in ad valorem taxes to Sunflower County.

“That’s a huge economic impact,” said Fisackerly. “Under our EDGE strategy, our energy portfolio will go from 1% renewables to approximately 30% renewables in only five years, so this is a huge shift toward these new power sources–probably mostly solar, but possibly wind and hydro, too,”

Currently, the station is mechanically operational but not yet dispatching energy, said Fisackerly.

“There are final steps to take with the developer but we expect to start dispatching energy on the grid in July,” he says. “We’ll have a celebration of the completion of the station and of Entergy MS taking ownership of it from the builder, Recurrent, on May 26 at the site.”

Recurrent Energy, LLC, a wholly-owned subsidiary of Canadian Solar, Inc., developed and built the Sunflower Solar Station for Entergy Mississippi, which will now own it for the life of the facility. Sunflower is one of the first utility-scale solar projects to be constructed under a Build Transfer Agreement in the United States. Recurrent Energy signed a BTA with Entergy Mississippi in 2018 designating the regulated utility to own the Sunflower Solar project when it reached commercial operation. The BTA was approved unanimously by the Mississippi Public Service Commission in April 2020.

“We had a bidding process where we sent out a request for proposals and there were dozens of solar developers like Recurrent that were going around the state finding locations to bid into through a competitive process,” explains Fisackerly about how the Ruleville location was selected. They chose Ruleville by putting a land deal together with landowners in the area and there were also transmission lines and a substation on site, making it easier to serve.

The Sunflower Solar Station also employed Mississippi vendors and construction workers: More than half of the labor hours spent on the project’s construction were from workers local to the area and surrounding counties, thus contributing to the local economy.

And, will Entergy customers notice any difference in their service with the solar power? “No,” said Fisackerly. “However, it will help lower costs during these times of higher fuel and natural gas prices. Plus, in 2015, we deployed three small-scale solar facilities to test how well solar would work here in Mississippi. From that, we were able to learn how safe and efficient this form of energy was and would be of value to our customers.”

In 2001, Entergy was the first U.S. electric utility to voluntarily commit to capping greenhouse gas emissions. Since then, the company has renewed and strengthened its climate action goals several times and this new solar station certainly fulfills that goal. Most recently, Entergy announced its commitment to achieving net-zero carbon emissions by 2050.

“There will be some retraining of our employees as a result of our move to solar energy,” said Fisackerly, “as well as the use of new technology. As an example of the latter, we’ll be using robotic mowers to cut the grass at the Ruleville station. So, yes, different skill sets will have to be learned by our crews.”

Canadian Solar was founded in 2001 in Canada and is one of the world’s largest solar technology and renewable energy companies. It is a leading manufacturer of solar photovoltaic modules, provider of solar energy and battery storage solutions, and developer of utility-scale solar power and battery storage projects with a geographically diversified pipeline in various stages of development.