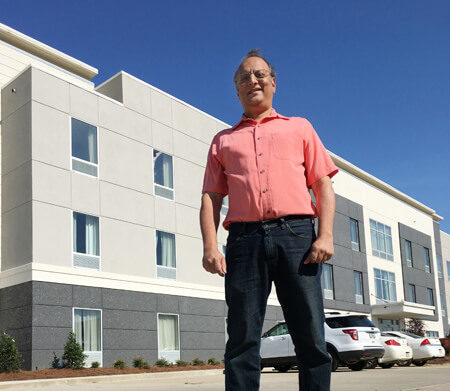 The long-awaited, 100-room, $27-million Lyric Hotel development that first broke ground in 2016 is scheduled to open within six weeks, according to owner, Dinesh Chawla.

Located on the western part of town near Delta State University, Chawla said the development is far more than just a hotel.

“It will give the visitors to our town—and local residents—another attraction,” said Chawla. “We are going to integrate the art and music professions into our presentation. There will be a lot of artistic and musical activities on the property that people will be able to enjoy. We will have some nice outdoor facilities including a pier on a manmade lake.”

Other amenities will include 12,000 square feet of meeting space, two full-service restaurants and a catering kitchen. There are plans to later open retail shops and walking trails.

“There will always be some things to do in the evenings such as listening to music,” said Chawla. “For people from the region who are already here, there are a lot of activities we have planned. We will have many private events like weddings and meetings.”

The Lyric Hotel took so long to finish, Chawla said, because construction was stopped twice for re-design. At one point, the project made national news when the New York Times ran an article, “Their Father Was a Refugee in India. Now They’ve Teamed Up With the Trumps.” The July 22, 2018 article said the president’s elder sons, Eric Trump and Donald Trump Jr., had announced the Trump Organization had become partners with Chawla and his younger brother, Suresh, on four hotels in the Mississippi Delta.

However, later the Trump brothers announced they were withdrawing from the Mississippi projects and other planned expansions, blaming a hostile political climate. The New York Times reported in Feb. 14, 2019 that any new hotel deals could have provided investigative fodder for critics of the president.

Currently, the hospitality industry has taken a huge hit with the social distancing and stay-at-home edicts issued by some states to prevent the spread of the coronavirus disease 2019 (COVID-19). Chawla said he has been around through many other emergencies or economic downturns, and this, too, will pass.

“COVID is not permanent,” said Chawla. “When 9-11 happened, we stopped flying, but then we got the TSA and people started flying again. Travel got to a record level before this happened. I don’t think you can keep people bottled up forever. There has to be a cost-and-benefit analysis about how long the economy is shut down. If some people had their way, they would shut down the country for six to nine months, but people have to live. People don’t want to just exist; they want to live.”

Another example he gives is the Great Recession of 2008. Some at the time feared the economy would never recover. Instead, it roared back to record stock market highs before the worldwide coronavirus epidemic.

The Lyric Hotel is located on 17.5 acres, and about 75 percent has been developed. Chawla said two more phases of the development are planned next year which could cost another $7 to $10 million. He said the total investment could end up being close to $40 million.

Initially, they expect to employ 40-45 people, with up to 125 employees when the project reaches full speed.

By Becky Gillette The Bolivar Bullet