Gary Gainspoletti – A True Advocate for His Community 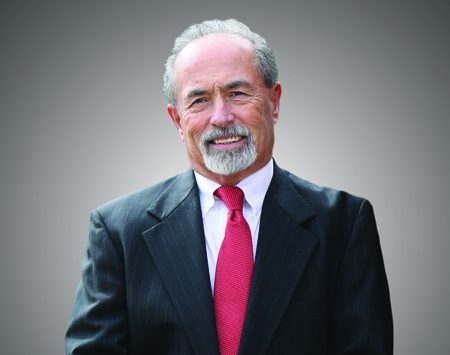 Born and raised in Shaw, this local CPA never left the Delta and continues to see the possibilities available for Cleveland and its residents.  While many have left the Delta for better opportunities, Gainspoletti decided to stay and create them. While some residents encourage their children to move to other areas of the country, he showed the beauty, familiarity and advantages of remaining in their hometown. That belief has helped shape a small community and strengthened its ability to not only endure, but to thrive—and dare say—grow.

Gainspoletti, son of the late Julius and Mary Gainspoletti, received a baseball scholarship to what is now known as Mississippi Delta Community College, and finished his college career at Delta State University, where he received a BBA in accounting.

“In 1974, I moved to Clarksdale, where I went to work at Ellis and Hirsberg, which at the time was considered one of the largest – if not the largest – CPA firms in the state,” he says. “Back in those days, I essentially did a lot of audit work, but had an extensive background in income and estate tax planning and preparation. I also married my wife, Jamey, during that time. Her father was a farmer, so she set the wedding for March when he wouldn’t be busy in the fields. She didn’t really understand what tax season was about, and I wasn’t going to tell her.”

The CPA says he loved Clarksdale and believed at the time that he had a great future there. “What brought me back to Cleveland was that I started seeing a deterioration in the economy of Clarksdale. When I would come to Cleveland, for a DSU basketball game or see my clients in Cleveland, it looked like it was on the move and had a lot of potential. It wasn’t so much about my profession but an opportunity for my young family to come here and prosper with what Cleveland was doing,” he explains.

Gainspoletti initially came to Cleveland to open his own firm, but that same year, William Boswell Sr. of Boswell, Boswell ad Barfield, retired so when they asked him to join, he did. He was there for twenty-two years. During that time, however, Gainspoletti never stopped wanting to learn, grow and explore any and all possibilities of his profession.

In 1996, he was doing a lot of audit and governmental work, including the usual tax work, but he became disenchanted. “It was boring and frankly thankless work,” he confides. “I started exploring other things that would be more exciting. While I was at a seminar in New Orleans, they touched on the field of financial planning. And in 1998, he secured several investment licenses and started doing financial planning and investment management. I maintained my tax practice, but gave up all auditing. I haven’t been in auditing since.

“It’s one of the best ideas I had for my career, I enjoy because it is an all-inclusive approach to dealing with literally every aspect of a family’s or individual’s financial and business needs. Financial planning covers a wide variety of solutions to  help people make every-day life decisions, whether they are planning for retirement, children’s college, or even sometimes what car to buy. Planning for retirement is becoming more and more critical because we are dealing with an environment where longevity planning has become necessary. Now people are living as long in retirement as in their working days. I just want to help them accomplish their retirement and financial goals,” he says.

“We have people who have identified and planned their goals, but sometimes they are just looking for a little clarity. They are concerned about the volatility of the market, world events like happenings in Iran and how these things might affect their accounts. They want to ensure things going on in the world won’t impair their long-term plans. We also have clients who literally do not have a clue. They don’t know what their magic number is.  They need help finding the magic number, the one they reach so they can sell their business or retire or quit their job. We help them find that number,” he says.

Three years ago, Gainspoletti expanded his business and opened an office in Hernando. And if he doesn’t sound like he has been living an already busy life, Gainspoletti believes in the power of a volunteer. He has been one for a majority of his adult life.

His father, a decorated World War II veteran, was always a great volunteer. “He believed that if there was anything to do in the community, he was always willing to pitch in. He was just a hard worker. He had a great work ethic and one thing I learned that has helped me more today than anything, when you have too much to do – go finish one thing,” he says.

In the early ‘80s, Gainspoletti had taken his father’s path and found himself extremely involved in the chamber of commerce. “Because of that involvement, I was continually doing things in and around city as it pertains to economic development. Like my father before me, I just developed a passion for working in this community,” he says. In 2005, several people asked him to run for Cleveland alderman at large. David Work had chosen to run for mayor that year, and Gainspoletti decided to run. He has been reelected three times since. He has now served in that capacity for fifteen years.

“It’s no different being on the board than when I was serving on the chamber,” he explains. “I have that same passion. Cleveland has a very vibrant economy. It is the only economy in the Delta or even this side of the state that is still in a growth mode in terms of retail sales. I think our ability to develop the Grammy Museum is a testament as is our continued efforts to improve our chances of success. Right now we’ve got over $12 million worth of city projects going on. We are fortunate to have secured enough grant money that the City’s cost is less than a $3 million. Some of the projects include the lighting system on Miss. Highway 8, building a million dollar soccer complex, and another much needed fire station.”

Gainspoletti is not interested in sitting on laurels. He wants to see the city continue to move forward and never settle for anything less than the best that can be imagined or achieved. Gainspoletti, who is a huge supporter of Delta State University, has been working toward helping ensure the school’s continued success for over forty years. “Back in July, I made a presentation to the chamber about my concerns for the future. Just to sum it up, we need a much more concerted effort in pursuing economic development. I would like to see us capitalize on three or four specialty schools that DSU has – Delta Music Institute, Aviation, Geospatial Information Technologies, and teaching video game tech – those things put us in a unique position to develop skills for kids. Maybe one of them will invent some new technology that can be made in Cleveland,” says Gainspoletti.

He also wants to continue to improve and expand on retail. “We were told there were only 14,000 people in Cleveland, but we have a shopping population that approaches 45,000 people. We need to continue to improve the retail business environment,” he says. Gainspoletti says that in speaking of downtown, he gives full credit to longtime alderman Paul Janoush who had the initial idea of a downtown Christmas lighting ceremony and Becky Nowell, wife of Mayor Billy Nowell for perfecting it. “50 Nights of Lights draws an untold number of visitors during those 50 nights. It sets the town apart and brings in a lot of excitement.”

Gainspoletti would also like to further capitalize on being the only Grammy Museum outside of L.A. in the entire world. “I would like to see us develop more music themes that will benefit off that role we have with the Grammy,” he adds.

The alderman also believes in solid research. “One of the things I did before I opened my mouth to the chamber was conduct a good bit of research. The books I read, called, Triumph of the City and The Next American City, are not fiction, but factual studies of cities that have prospered and those that have failed. The absolute No. 1 driving factor in every case was education,” he says. “You either became successful because of education or the lack of education and skilled workers. One of the things we are working on now is to develop a more educated work force. One of the key things we need to do is direct our attention to specialization, and we are still working on identifying those.”

As far as making Cleveland his home, Gainspoletti has no regrets. He and his wife, Jamey, raised their two children to love and support their community. Russell and his wife, Rivers, have three boys, and their daughter, Presley and her husband, Andy Lee, have three girls. He is happy they too, call Cleveland home.

“This is the absolute center of the universe. I can go anywhere in the world starting right here  in Cleveland. We live a very good lifestyle here. We have a great quality of life. We have two metropolitan areas that are 100 miles in either direction,” he adds. “Cleveland has been fortunate to have people who care. I learned a long time ago that you can have anything in life you want as long as you help other people get what they want.”