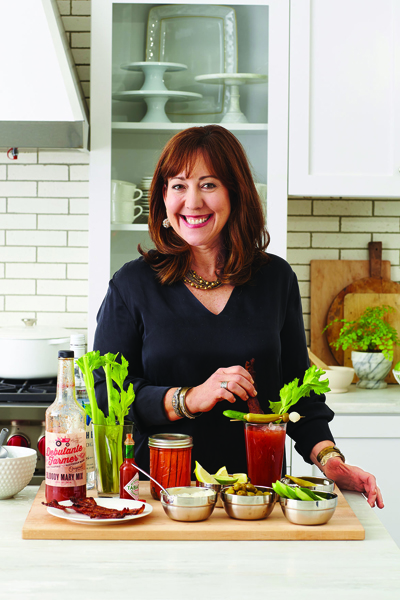 Rosedale native is making a splash in the food world.

When Elizabeth Heiskell asks What Can I Bring? she might be referring to her latest cookbook, published by Oxmoor House; or she may be calling up a sincere question for one of her Elizabeth Heiskell Catering clients; or she could be inquiring about what her latest culinary spot on NBC’s Today Show should feature this time around. But, suffice it to say, the question What Can I Bring? definitely conjures up something that is deliciously Southern when it comes to Oxford, Mississippi’s Debutante Farmer. And oh yes, she also has her own brand of Bloody Mary mix by the same name.

Heiskell grew up in Rosedale and her husband, Luke, grew up in Sumner. “He grew up on one side of the Delta and I grew up on the other,” Heiskell laughs.

Heiskell says her life was clipping along pretty nicely when the opportunity to move to Oxford and become involved in some North Mississippi farming presented itself.

“My husband, Luke and I, were living in the Mississippi Delta,” said Heiskell. “And life was perfect. I was the head chef at Viking Range Corp. and Luke was building homes at the time. And he’d finally built me my dream home in Cleveland; I’d lived in rental after rental. I had my catering company, and everything was just rolling along, until the day he came home and began talking to me about his friend, Sandy Sharp, who owned a property right outside of Oxford. And he told me that Sandy had a vegetable business down in Husser, Louisiana called Covey Rise, but he was looking for someone to partner with and for that person to move to Oxford and grow vegetables.”

Heiskell said that at the time, she really wasn’t paying much attention to her husband’s tale, as she was in her Viking kitchen that she loved more than life itself doing her favorite thing in the world: cooking.

“Finally, it began to sink in when he said that Sandy was looking for someone who knew how to grow vegetables, but that he was also looking for someone who knew about the culinary world. So, I remember asking him, what are you saying, Luke? And my husband made it very plain then, that Sandy wanted us to move to Oxford and partner with him in Woodson Ridge Farms. And at first, I thought he’d lost his mind; that the girls and I had finally driven him crazy.”

But, it wasn’t long before Heiskell realized her husband was still of sound mind and body, and so the family, the Heiskell’s have three daughters, moved to Oxford.

“I was determined that I wasn’t leaving the Delta. I told him that I had to live in the Delta; it’s where I’m from and it’s where I was raised,” she said. “But I went over and looked around at the farm and it was beautiful. And all of those delicious vegetables—it was just more than I could take. So, we went down to Louisiana and met with Sandy, came back and went to the Oxford farm again, and right then and there, we decided to make the move to Oxford.”

Heiskell knew that leaving the Delta wasn’t going to be easy for either one of them, because they were as much a part of the flat and fertile land as it was them. But, the move seemed like the right thing for them at that time; it was an amazing opportunity and a big part of the farm to table movement. And she knew that many chefs were realizing that they needed to get back to that earthier way of preparing foods; back to their parents’ and grandparents’ ways of doing things, as far as using vegetables, knowing their farmers and knowing where their food came from.

Once the Heiskell family was ensconced in the farming way of life, Elizabeth hit her stride even more. She began to go around the area selling their healthy produce, introducing many local and surrounding restaurants to the benefits of the farm to table movement.

“And I went back to my catering,” she adds. “We refurbished the existing barn that was on the farm and I started doing beautiful events there, and my catering. I built a small catering kitchen in that barn, and my business grew; actually, everything grew, especially our tomatoes that first year. We were faced with thousands and thousands of pounds of tomatoes and really nowhere to take them, and that’s when I started cooking the tomatoes down and making my Bloody Mary mix with them. The good news is it takes tons and tons of tomatoes to make the mix, so we began to cook them down with onions, garlic and salt, Worchester and lemon and lime juice, and I started canning it and selling it.”

And the Debutante Farmer brand was born. Today, Heiskell sells her Bloody Mary mix across the United States and has established a very successful business from it. After the launch of the Debutante Farmer, Heiskell continued her catering, which grew immensely. Her hosted events and her catered affairs were becoming very popular, everything from larger events to small, intimate gatherings, and it was at one such smaller venue that one of her lifelong dreams began to weave itself together.

“I was asked to do a dinner for NBC Chairman, Andy Lack, at Rowan Oak,” she said. “There were only 12 people there that evening and Andy was one of the guests. And you have to understand; one of my dreams in life had always been to be on the Today Show. In fact, for 17 years at that point, it had been a lifelong dream. And this was a Thursday evening and he was taking over as head of NBC on the following Monday. He had been head of NBC in the past; he actually hired Matt Lauer 20 years before, but he’d retired and gone on to do many other things.”

Heiskell was beside herself when after the dinner Lack held her hand and told her that she needed to understand how wildly talented she was.

“And I told him that I was very glad he thought that, because I had wanted to be on the Today Show for 17 years and I was very glad he came all the way to Oxford to find me,” Heiskell laughs. “We talked for a while and everybody at the dinner was encouraging Andy to put me on the show.”

Heiskell said she didn’t hear anything from NBC for about three months, but she just couldn’t let it go, because she had absolutely no doubt that this was her best opportunity to realize her dream.

“So, I sent Andy a bottle of my Debutante Farmer Bloody Mary mix, which I had already put in his hotel room while he was in town because he told me how much he loved it,” she said. “So, I sent that, pimento & cheese, and cheese straws, which he calls them cheese crackers, and I also sent him a notepad in that package that had the heading ‘What To Do Today.’  And I made him a list of things he needed to do. Number one was to call Matt Lauer and put Elizabeth Heiskell on the Today Show; then it was write Elizabeth Heiskell’s name on the back of your hand with a black Sharpie just in case you forget by the time you get to work. And I wrote some more funny suggestions and sent it off. Finally the senior producer, Debbie Kosofsky, called me about two weeks later.”

Heiskell thought that if she could fulfill her dream of appearing one time on the Today Show that would certainly complete her dream, but she had no idea it would become a recurring role.

“The way this dream of mine started was 17 years ago I was watching the Today Show with one of my friends and it was right before Thanksgiving and Martha Stewart was on there with her turkey and I just wasn’t very impressed by it. My grandmother makes a pillow case turkey that I think is just the most wonderful turkey in the world. And I told my friend that one day I was going to be on the Today Show and do a Thanksgiving turkey the way my grandmother did. I felt the world needed to know about my grandmother’s pillow case turkey.”

Debbie Kosofsky from the Today Show decided to send a team from New York down to Oxford to see what Heiskell did.

“We did a segment here and it was a tomato dinner,” said Heiskell. “And it ended up being put up for a James Beard award, which was really exciting. And then later, Debbie called me and said that they wanted me to come to New York and actually be on the show. They wanted me to come the week before Thanksgiving and do the holiday turkey.”

Heiskell thought that singular visit would be it, but they asked her back and she and her whole family went up to New York, and even appeared on the show with her.

“After that, I would get calls every six weeks or every month to come back as a regular,” she adds. “And then almost a year to the day since my first appearance, I signed a contract as a Today Show food contributor. So, now I’m an employee of NBC and I have a regular schedule for when I go up to New York.”

Heiskell says that now she’s on the Today Show  every four to six weeks.

Sid Evans, editor in chief, Southern Living magazine, had seen Heiskell on the Today Show a few times and wanted her to be involved with Southern Living in some form or fashion.

“Sid came to Oxford and we had breakfast and talked about what I could do with the brand,” she said. “So, I did some Facebook live things and some web-episodes, and then he asked me would I be interested in doing a book with them. So, I met with Sid and Katherine Cobbs, who is the Oxmoor House editor, and we did the book What Can I Bring? And it’s been unbelievable what the book has done.”

Heiskell says that What Can I Bring is everything that she’s ever done and what she’d watched her mother and grandmother do over the years.

“Growing up in the Delta, you didn’t just run to Wal-Mart and pick up some Bundt cakes that had been shoved in a plastic box when somebody was sick or in need,” she adds. “You went to the kitchen and you cooked. It’s second-nature to me. And this book is so perfect for who I am and for the way I grew up. And I think one of the reasons this book has been so successful, is that all of the recipes in the book are my favorites. These are the best recipes I have, my grandmother had, my mother had, and the Southern Living Party Cookbook A Modern Guide to Gathering, which was  released in October of 2018, is a remake of a Southern Living book that came out in 1973, Southern Living Parties. In May of 2021 her third book entitled Come on Over, Recipes for Days will debut.

Heiskell says she doesn’t worry about the future and her newfound fame; she just takes it one day at a time, trusting God’s plan for her life.