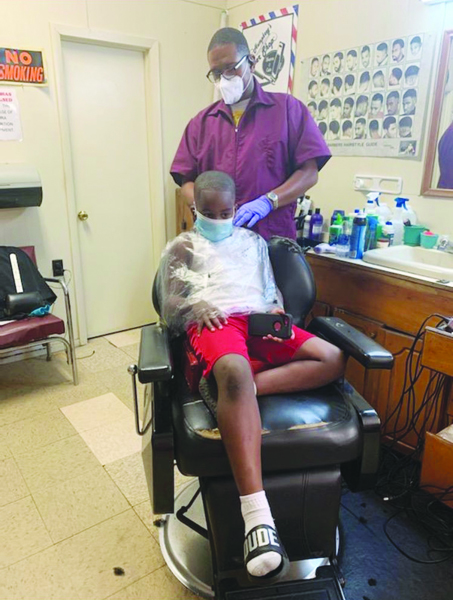 Tom Humphrey gave his first haircut to his brother when he was 12 years old growing up in Shelby. Sixty-six years later, he’s still cutting hair in Shelby, but now with his son, Terrence, who together own Humphrey’s Barber Shop, a longstanding local business that not only provides shaves, shines and trims, of course–but also conversation and even health awareness. A third barber, Sid Davis, works with the father and son team as well, and a shoe shine man comes in from time to time.

“In the African-American community, especially for men, the local barber shop is a special gathering space where we can speak our minds frankly,” said Humphrey. “Folks would even come in just to talk, not even needing a haircut, to get all of the local updates and talk politics, sports–what have you. I always said that you can learn more at the barbershop than you can watching the news!”

Terrence Humphrey confessed, “I actually learned about the birds and the bees growing up in the shop! You can hear and pick up all kinds of things with all of the conversation and debate going on. Politicians always come in to campaign when it’s election time, of course, and just about any issue you could name has been discussed in Humphrey’s Barber Shop, there’s no doubt.”

“We also worked with the Delta Health Alliance in Greenwood to bring awareness to the problem of hypertension in black men. We would hold workshops in our shop and provide blood pressure screenings, give out literature and try and help our community be more aware of their health,” said Humphrey. “It’s a silent killer. You can walk around all day and not even know you have high blood pressure so we thought this was a good cause for us to promote,” added Terrence, who comes in to cut hair later in the day and stays until the shop closes at 8:00 p.m. on weekdays and 10:00 p.m. on weekends. He’s been working with his father for a number of years.

The elder Humphrey opened his first shop in his hometown in 1994, but bought a new building that houses his current shop in 2000. His three chairs were always constantly full prior to the arrival of COVID in March. Now, Humphrey said, his business allows only one client in at a time and masks must be worn and temperatures taken before entering.

“It’s a much different way to work than what we’re used to, but hopefully things will get back to normal before too long,” said Humphrey.

Even though Humphrey started cutting hair at a young age (“I used to charge 15 and 30 cents a cut!” he chuckled), he obtained a formal license/degree from a barber college on the south side of Chicago where he lived for a time. When he returned to Shelby he took a full time job working at the Department of Corrections for 22 years while cutting hair on the side. “After I retired from the Department in 2000 I went back to barbering full-time within the new building and I don’t see myself ever quitting,” said Humphrey.

Terrence, who is currently working on obtaining an Engineering degree at Mississippi Valley State University, said he has always been inspired by his father and his love of the profession and of the shop.

“It keeps him going. And I think that’s why he has become such an institution here in town and why we get customers from all over the Delta. It’s just his love of his work along with the folks he works on and the fact that he’s been doing it for so long and shows no sign of slowing down,” said Terrence.

“I think I’ve cut every head of hair in Shelby!” Humphrey laughed.