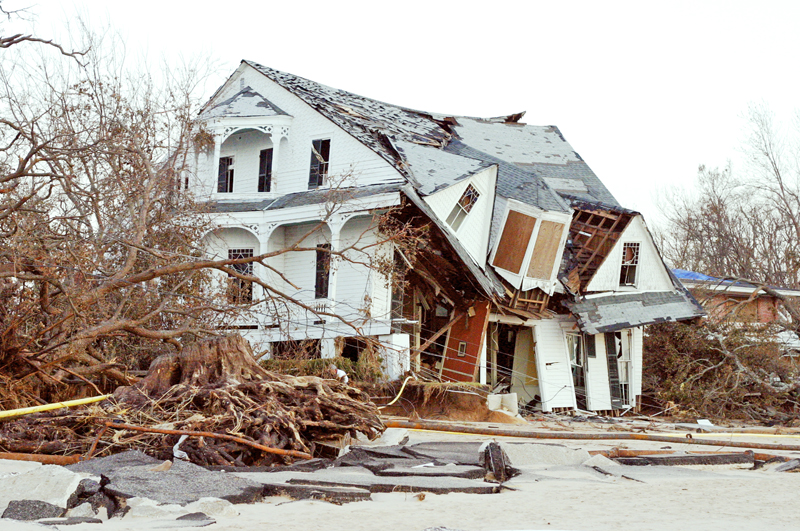 The mere mention of the name Katrina still causes many Mississippians to shudder.

Ramming and ravaging the Louisiana and Mississippi coasts 15 years ago this month on August 29, 2005, the aftershock of the devastating hurricane, in some way, touched every life in both states–even those living in relatively “safe” areas and insulated far enough from its impact–like Cleveland. Yet it also brought out the best in so many people who were willing to sacrifice so much in order to help their fellow men and women who were hurt the most by the storm.

To recap: Hurricane Katrina was a Category 5 tropical cyclone that occurred in August 2005, causing over 1,200 deaths and $125 billion in damage, particularly in the city of New Orleans and the Mississippi Gulf Coast. It was at the time the costliest tropical cyclone on record. The storm was the fourth-most intense Atlantic hurricane on record to make landfall in the contiguous United States.

From Wikipedia: “Katrina originated on August 23, 2005 as a tropical depression from the merger of a tropical wave and the remnants of Tropical Depression Ten. Early the following day, the depression intensified into a tropical storm as it headed generally westward toward Florida, strengthening into a hurricane two hours before making landfall at Hallandale Beach on August 25. After briefly weakening to tropical storm strength over southern Florida, Katrina emerged into the Gulf of Mexico on August 26 and began to rapidly intensify. The storm strengthened into a Category 5 hurricane over the warm waters of the Gulf of Mexico before weakening to Category 3 strength at its second landfall on August 29 over southeast Louisiana and Mississippi.”

The rest, as we all sadly know, is history.

Marcia Salinero, now a Cleveland resident, had to flee her St. Bernard Parish home in south Louisiana in the town of Violet when Katrina approached.

“I was born in Gloster, MS and my parents, who actually lived across the street from us in Violet, still had a home there. My son, David, who was on staff at Delta State University at the time–and still is–had asked us all just to come up to Cleveland and so we did. This was after the storm had hit.”

What happened before that was horrific. Salinero had lived in south Louisiana since she was five years old and grew up within three blocks of the river.

“We were accustomed to hurricanes and my opinion had always been to monitor any situation that came along and leave when and if it was time to do so,” said Salinero. “I well recall waking up at 2:00 a.m. right before Katrina approached landfall, turning on the weather coverage on television and then waking up my whole family–including my parents across the street–and telling that we had to leave. Immediately. And, even at that time it was difficult to get out of Louisiana. It was a literal nightmare trying to get out of New Orleans and Metairie. A three and a half hour drive took forever–the traffic had built up so rapidly.”

It was very nerve wracking  because Salinero’s husband was in front of her in his truck and her father and mother were behind.

“My daughter was in another vehicle as was one of my sons and we were all trying to stay together in line in the traffic. Eventually, after several hours, we got to the house in Gloster,” she says.

After Katrina hit it was almost a month before Salinero could attempt to go back to Violet to their home. The water was still going down. When we finally got to arrive, nothing was salvageable,” she said. “Everything was gone in our house. Totally. The water had gotten up and over the roof–it looked like all that had been inside our house had been through a washing machine. All of our possessions were totally unrecognizable. Only one of our neighbors stayed through Katrina and he survived only after being rescued by a helicopter.”

And, after all these years?

“It took me a long time to get over the whole ordeal, honestly. I would have dreams that somebody or something was making me go back into that deep water at our home. I got over it, eventually–but it took a long time. My husband passed away three years after Katrina hit so, you know, I had to deal with that, too. I had one of my sons here in Cleveland with me and my daughter, which helped. But, I decided I would never, ever return to south Louisiana–I put it behind me and closed that door permanently,” said Salinero.

Stephanie Johnson, of Cleveland, is Marcia Salinero’s daughter. She echoed much of what her mother said.

“My younger brother, who worked at Delta State at the time, had an apartment in Cleveland which is where we eventually ended up after the nightmare we experienced. I don’t think anybody in my family expected Katrina to be as horrific as it turned out to be. We made it to Gloster, with our convoy, but initially–after power and water was lost–my mother, father, grandparents and I made our way up to Cleveland to my brother’s. We eventually ended up staying here.

Johnson remembers when they were allowed to go back to Violet to where their home was. It was quite surreal.

“You have to cross a bridge to get there and I recall it being the weirdest, eeriest, scariest thing I had ever experienced and probably ever will,” she said. There was no movement: no birds, no wind, no grass, no trees–nothing. But, you’d look around and see furniture everywhere or other household items. It was as if a bomb had gone off. And, the ground was cracked and dark grey from where the mud had dried. It was creepy and dead. I’ll never get those images out of my mind. We did salvage a few items and brought them back to Cleveland and my husband and I later made a second trip to try and retrieve some possessions but…that was it. I haven’t been back since.”

Johnson said she and her husband were depressed after the hurricane while living in Cleveland–and for good reason.

“You know, I still think about it from time to time. We lost friends, we lost a comfortable way of life, one where we were very happy. We lost our former family time. I mean, in December of 2004, none of us would have ever believed that would be the last Christmas our family would spend together in our Louisiana homes. Who would have known? The family get-togethers went away after Katrina. And, of course, we had to start all over again here in Cleveland–we had to get adjusted. It was hard for a long, long time.”

Johnson now teaches kindergarten in Leland, where she has taught for 14 years since moving to the Delta. Her husband, Craig, works in Cleveland.

“If something comes on television now about Hurricane Katrina, I’ll watch it,” said Johnson.  “But, Craig still just doesn’t want to be reminded of it. And, I understand.”

Pete Peden, who for over 40 years headed up Time Warner and CableOne in Cleveland, but is now retired, actually went down to ground zero with a crew to help people on the Gulf Coast.

“CableOne had acquired the Mississippi Gulf Coast properties and stations and a fellow named Scott Randall, a Delta State grad, ran our operations down there as manager in Biloxi. Of course, Biloxi got almost totally blown away, as did many of our operations as far north as Batesville, with trees and power lines being knocked down–as well as having fuel problems. The devastation was so bad on the Coast that I was called down to Biloxi–it was unbelievable–it was totally gone, really. We had to carry down generators, fuel and other supplies. I was able to get in a motel with electricity and hot water and set up a sort of base. I well remember, though, the first night I was down there to help and dinner time rolled around. What did I eat? A can of vienna sausages, a few crackers and a six-pack of hot beer to wash it down—and a candy bar for dessert. We then lived off canned food and whatever we could. I stayed on the Coast for a week before I had to get back north in the state to help our other offices. The only thing I’ve seen comparable to Katrina was the ice storm of 1994,” said Peden.

Still, Peden is amazed to recall all of the structural damage in the Biloxi area where he was stationed that Katrina caused.

“It was unbelievable,” he said. “I’ll never, ever forget it.”

Cristyn Holder took a youth group from her church, First Methodist in Cleveland, to lend aid and assistance to victims of Katrina about three weeks after it hit. At the time, she was the Christian Educator and Youth Director at the church.

“We took kits we had assembled with socks, tooth brushes, toiletries and other such items down to the Coast. And one of our youth members had a relative in Hattiesburg who owned a Krispy Kreme, so I remember taking loads of donuts with us also. We arrived at a local Methodist church in Biloxi and set up a ‘Katrina kitchen’ as we called it–it was actually just a large tent–and I had 25 youths with me along with a few adults  cooking for and feeding anyone who came to see us. We made breakfast and then sandwiches for lunch for people who needed food. The local Methodist minister also took us into some surrounding hard-hit areas where we distributed the kits we had made and helped them to try and clean their homes. I well remember to this day one tiny, little old lady trying to get some china down from a ledge in her home–she couldn’t reach it. So all of our kids helped get it down for her and she cried and cried, overjoyed that we had gotten it all down. One of my young ladies went up to her and said she was glad to help and the old lady put her hand on her face and said, ‘You don’t know what this means to me.’ We then stood in a circle around her, held hands and prayed. It was such a moving experience–one that I will never forget,” said Holder.

Holder said she and her youth group stayed a week on the Coast and slept on the floor in a local church. “We felt blessed to be there and it was an experience that none of us will ever forget. You learn through such experiences to never, ever take anything for granted. We even had one of  our young ladies, who could speak Spanish, talk to Hispanic people who had been displaced, and the fact they could even talk and share with us meant the world to them. Just to share the experience with a fellow human being. At night we would all go to the beach and have our devotion time. So, while it was certainly a tragedy, it was also a moment when we brought out the best in each other.”

Hurricane Katrina left an indelible mark on our state–especially, of course, on the Gulf Coast– and ripple effects, both positive and negative, still reverberate. Even in Cleveland.