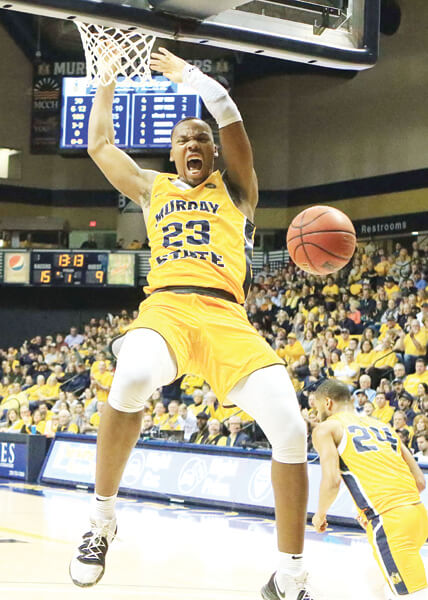 Standing 6-foot-10, Cleveland native  Kamarion “KJ” Williams has been an imposing, powerful presence on the basketball court for the Division I Murray State University Racers.

The sophomore forward played an average of 23.4 minutes a game and scored 12.7 points and pulled down 7.6 rebounds a night in 32 contests this season. He was a well rounded player offensively as he shot 67 percent (75-of-112) at the free throw line, 36 percent (18-of-50) from 3-point range and 54.4 percent (156-of-287) overall in the field. On the defensive side, he had 34 steals and 21 blocks. His production helped pace the Racers to a 23-9 overall record with a trip to the Ohio Valley Conference Tournament Championship game where they suffered a 76-75 heartbreaking loss to Belmont . His individual performance this season enabled him to be named All-OVC First Team.

His sophomore season marked significant improvement from his freshman year when he tallied 7.6 points and 4.7 boards a night.

“For my sophomore season, I made a big jump statistically scoring wise to help the team get more points,” said Williams. “I had to work very hard throughout the summer and before the season started. It was just a sense of pride for me to go out and play the game that I love and do what I have to do to help the team win.”

“It was very shocking knowing you could have had a chance to go on and play again,” said Williams. “Going out the way we did with the tournament in the championship game, we lost by a buzzer beater. We knew that we could have had a chance to play again coming off that loss. We had the mindset to come in that next tournament to play our best and win. With the corona, we had to postpone it.”

On the high school level, Williams was a basketball standout at East Side High School and then Cleveland Central High School which was formed from the merger of East Side High School and Cleveland High School in 2017. In Williams’ junior year in the spring of 2017, he was an integral part of the Trojans finishing 22-12 and advancing to the 3A State Boys Basketball Championship game against Velma Jackson where they eventually lost 46-32 to finish state runner-up. Before getting to the state title game, East Side defeated a 30-0 Morton team 56-53 in the semifinals.

In his senior season, Williams turned in another dominant campaign as he helped lead the CCHS Wolves to a 22-9 record with a trip to the second round of the 5A State Boys Basketball Playoffs in their first year.

Williams has basketball in his blood. His mother is Amie Williams, who played for the East Side High School Trojanettes where she was a member of the school’s 3A State Girls Basketball Championship team as an eighth grader in 1995. She helped guide the Trojanettes to the 4A State Title game where they finished runner-up in 1999. After East Side, she ended up being a standout player at Jackson State University.

Williams feels having someone like his mother who has been through the rigors of college ball has been beneficial to him.

“It’s been another generation knowing she was on the same level that I am now,” said Williams. “She’s been through what I’ve been through. She’s been helping me and training me to prepare me for the situation I am in. It was kind of simple, because I knew what I had to do.”

Murray State University is located in Murray, KY which is approximately 290 miles from Cleveland.

Willlams has gotten plenty of support from the community he has grown up in and that hasn’t gone unnoticed at his games.

“I have had family members and people from around the Delta to come running and watch me play,” said Williams. “It’s been very good for me, and I gave them a show. They enjoyed themselves watching me play, and have fun.”

With two more years still left in his career, Williams is determined to get even better.

“Right now, I’m working out mostly everyday just to get better, especially knowing we have a great group of guys coming in for next season,” said Williams. “We have to teach the new guys on the great tradition that we have here at Murray State. The coach has great expectations of me that I have to come in and help facilitate the team.”