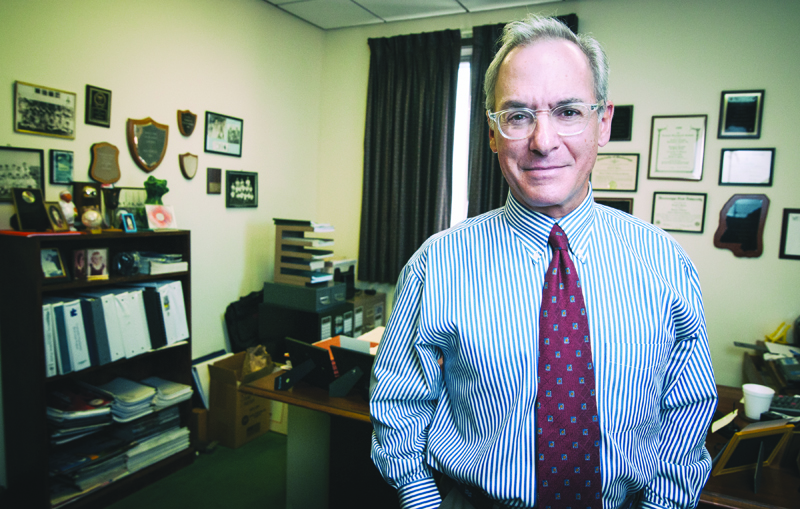 Cleveland Native is Director of the Clarksdale-Coahoma County Chamber of Commerce.

Jon Levingston brings both the experience of a native son who loves his community combined with knowledge of the broader world to his position as the executive director of the Clarksdale/Coahoma Chamber of Commerce and the Economic Development Authority of Coahoma County. Levingston grew up in Cleveland where he credits his parents for setting high standards, including a work ethic honed by starting work at age twelve in the family’s furniture store warehouse. While he has lived in Clarksdale for thirty-seven years, he also has lived in Rome, Ga., Athens, Ga., Atlanta, Ga., Richmond, Va., and New York City.

“Those are great American cities, but I find that Clarksdale offers a very special combination of small town friendliness and big town sophistication,” said Levingston. “It is a safe and clean town, perfect to raise a family or spend one’s retirement, or just spend a few weeks visiting.”

“My grandfather hired him in the late 1930s,” said Levingston. “Even though he was in his mid-60s at the time I began working for him, he was the hardest working man I ever met. He treated me respectfully, but expected me to work hard. I tried to never disappoint him.”

That was true even in times when he was helping deliver furniture that weighed more than he did.

Later, working with his father, Douglas, in the family business was a revelation.

“I observed a level of commitment and dedication that has been an inspiration to me ever since,” he said. “While he could be very demanding of me, I witnessed his thoughtfulness and kindness to our employees. He was a superior teacher.”

From an early age, he had a great interest in all the arts, but particularly the visual arts. His mother, Barbara Levingston, and a cousin, Stan Topol, introduced him to a variety of periods in American and European art.

His parents also appreciated different types of music. “Jazz from the 1940s and 50s, as well as 18th and 19th century classical music filled our home,” he said. “Many of the great teachers from the Delta State art department, such as Malcolm Norwood, Mary Ann Ross, and Terry Simmons, welcomed me and contributed to my education.”

Levingston lived outside the Delta for a number of years before returning to Clarksdale in 1983 to help his father with business interests. After his father passed away a few years later, Levingston ran their businesses until 2012, when he sold them.

“I also had the opportunity to participate in a variety of appointed positions, which gave me an understanding of the way state government operates and an appreciation for the many outstanding state employees who labor to carry out the responsibilities of government,” he said. He was appointed to the Mississippi Arts Commission Board in 1985 by Governor Bill Allain, serving as chairman from 1988 to 1990. The Governor’s Awards for Excellence in the Arts program was created by his board. Governor Ray Mabus appointed Levingston to the Mississippi Development Bank Board and the State Personnel Board. Early in his administration, Governor Haley Barbour appointed him to the Mississippi Civil Rights Museum Commission.

When he returned to Mississippi in 1983, he was invited to join the Rotary Club and the Chamber of Commerce where he learned a great deal about the community, including its need to recruit and retain industrial jobs.

“I realized more jobs meant more paying customers for my businesses, as well as those of the other merchants in town,” he said. “I also understood that a strong and vibrant industrial base would create a stronger tax base and insure a more secure infrastructure for our community.”

One day, while on a buying trip for his company, he overheard the owner of a furniture manufacturing firm complaining about the community in which his factory was located. He told the owner that he should consider moving to Clarksdale. The owner was interested, and through the work of the late Walter Thompson, then president of the Clarksdale Chamber of Commerce, and Pete Johnson, a Clarksdale lawyer and banker who later was elected State Auditor, a visit was set up.

“They put together a wonderful team of dedicated men and women, and all of us worked to bring that manufacturing plant to our community,” said Levingston. “Porter Ferguson started with 50 employees and grew to almost 200. It was here for about 20 years.”

In the 33 months since Levingston assumed his job as executive director of the Chamber and the Economic Development Authority of Coahoma County, he has produced 5 economic development projects for his community. In March 2018, Molded Acoustical Products of Easton announced a plant expansion creating 24 new jobs. In December 2018, PeopleShores, a Silicon Valley based outsource company announced that the location of their second U.S. center would be in Clarksdale. The company stated it would scale the center to 200 employees. In July 2019, Image Industries, a Chicago based steel manufacturing company announced that it would relocate its headquarters and production facility to Clarksdale, creating 60 new jobs. In October 2019, Saf-T-Cart, a Clarksdale based steel container manufacturer, announced a plant expansion, creating 25 new jobs. In February 2020, the global leader in the development of Robotic Process Automation software, Automation Anywhere, a Silicon Valley based company, announced its collaboration with PeopleShores in creating the first RPA research, development, and training center in this region of the country. On the same day, Horne LLC, a Jackson based business advisory and accounting firm, announced it would offer software business solutions to its client base throughout the southeastern US created by PeopleShores’ Clarksdale center.

Levingston credits the unprecedented quantity of economic development activity in such a short period of time to the extraordinary cooperation he has received from local, regional, and state partners.

“Nothing we have developed would have been possible without the powerful commitment of our Mayor and Board of Commissioners, as well as our County Board of Supervisors. Additionally, regional groups, such as Delta Council and their remarkable Delta Strong program, have been essential to our development efforts. And I never cease to be amazed at the dedication, professionalism, and diligence of our state economic development team at the Mississippi Development Authority. At every level and with every project, they have been critical to the success of our projects,” said Levingston. He also credits Coahoma Community College, Delta State University, the North Delta Planning District, and the Workforce Development Area Board for their creativity and support in developing essential workforce education opportunities for our regional workforce.

Levingston has truly enjoyed travelling to varied locations telling the story of Clarksdale and the Delta and, most especially, the efficacy of its workforce. In November and December 2018, he travelled to India to observe a variety of companies and speak with business leaders. In 2019, he was a featured speaker at the Ideal Village Conference at Stanford University. In 2020, he was invited to return to Stanford, and was to be featured at a conference at Harvard University, as well as the global conference on automation in Chicago. While this year’s conferences and another recruiting trip to India have been postponed until next year, Levingston plans to increase his travel as soon as safety permits. “It has been so helpful to share our story of our struggles and our triumphs. People have a certain image of Mississippi and the Mississippi Delta that may not reflect who we really are today. I love setting that record straight: while we have endured challenges, we have infrastructure and people receptive to new industries and economic development. We are a thoughtful, gracious, and caring people who welcome new friends and opportunities. We are open for business and committed to a bright and prosperous future.”

Levingston has also been involved in writing. He contributed to the book Bright Fields: The Mastery of Marie Hull, authored by his brother, Bruce, that was published by University Press, 2015. In a review for the Clarion Ledger, Milly West wrote, “And he (Bruce) could not have found a better contributor than his brother Jon Levingston whose two impressive essays, Faces of the Depression and Abstract Lyricism, show a sincere and learned understanding of Hull’s growth as an artist and of how she fell into place in 20th century art history.”

Levingston said a vibrant arts community is a vital component part of an economically healthy community and enhances immeasurably the quality of life of that community.

Levingston has been a runner for more than 30 years competing in marathons, half marathons, 10k and 5k races.

He and his wife, Jennifer, have been married 27 years, and have three daughters.