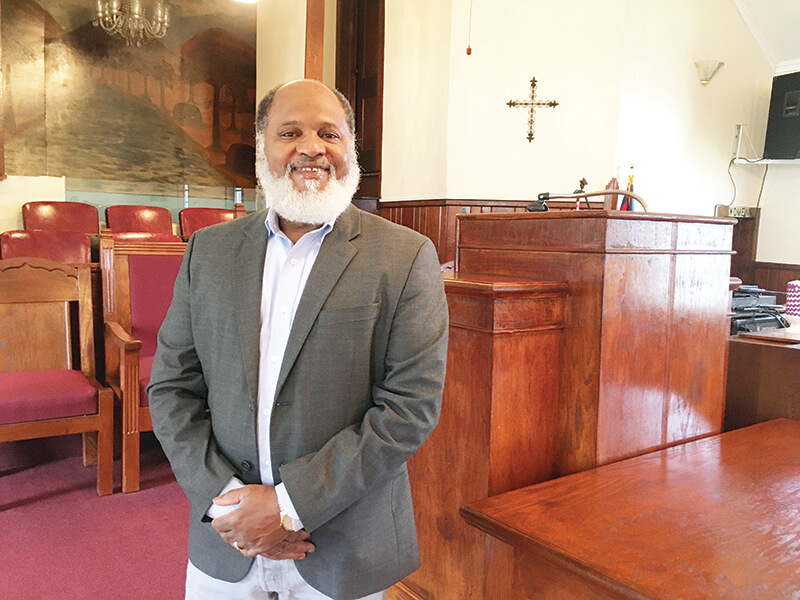 A life of service to others.

It’s often said that a church is only as strong as its pastor. That is certainly the case with St. Andrew Missionary Baptist Church in Shelby as their gifted Pastor Eugene Anderson has been shepherding that congregation for the past 20 years. Anderson has been a great blessing not only to St. Andrew, but also to the many he has met and touched all throughout his life.

When Anderson was a child, his mother told him he was going to be a preacher. The day he was born, a priest came into her room and gave her scripture from Isaiah 61:1, The Spirit of the Sovereign Lord is on me, because the Lord has anointed me to proclaim good news to the poor.

“The priest told her she had delivered a preacher and she never let me forget that,” said Anderson.

The day after he wed his wife, Judy, at 19, he accepted that call into the ministry and has never looked back. His representation of the Holy Spirit is clearly evident the moment you meet him.

However, that didn’t just take place over night. It took many years during his teens and several challenges before Anderson accepted God into his life.

Born in 1959, Anderson was raised west of Indianola on the Heathman Plantation. His first job was chopping cotton at the age of 13 and although his parents did not advance their education beyond the third grade, they were adamant he would.  But, obtaining a college education was a ways off before he fulfilled their dream.

After graduating from high school, Anderson served in the U.S. Army, but an injury cut that short. He held down various jobs, however he was completely dedicated to studying scripture at night.  During the early part of his adult life, he studied alone and then under two different Bishops. He became a youth pastor, and after awhile he started pastoring at other churches and worked as a Hospice Chaplain. As his knowledge and training of the gospel grew, so did his ministry.

In 1985 he took a job at Parchman Penitentiary where he worked as a Drill Instructor with the prison bootcamp program and eventually rose to the position of Lieutenant. His wife also worked at Parchman and they lived on the grounds. Then, after 18 years at Parchman, Anderson left to pursue the ministry full-time.

In February of 2000, he was elected to St. Andrew. He also worked with the Shelby Women United Community Outreach Group and was involved with various community projects in Shelby including city council meetings.  At one time, Anderson even wrote and edited a community newspaper there, The Shelby Gazette. Upon arriving in Shelby, he hit the ground running not only with his church, but the community at large. It’s twenty years down the road now, and that dedication continues. Besides his commitment to the town and church, Anderson is also the Regional Director for Region 2 West with the Mississippi Department of Child Protection Services (MDCPS) where he oversees the investigation of child abuse and neglect, reunification of parents and children and works with foster care. The list of his involvement in all things community, doesn’t stop here.

At age 50 and after overcoming prostate cancer, Anderson decided it was time to go to college.

“That allowed me to become the first in my family to actually get a post-graduate education,” said Anderson who holds both bachelor’s and master’s degrees in Social Work.

His first stop was Coahoma Community College in Clarksdale where he was elected president of his class and graduated the valedictorian.

A few years later, he advanced his education at Jackson State University where he received a full scholarship.

“My wife graciously let me go to Jackson State and I even lived on campus,” laughed Anderson. “And, St. Andrew allowed me to forgo our Wednesday night Bible Class and I’d come back on weekends to preach. I thank God for the congregation. They’ve stood by me and we’ve tried to stand by each other through thick and thin as they say.”

Anderson said he looks at his congregation as a community.

Anderson said if people have needed help in the community, St. Andrew didn’t hesitate to lend a helping hand.

“We’ve assisted with all kinds of needs in the community and that is something that is especially close to my heart because I’m a giver,” said Anderson.

He then provided words of encouragement by saying that sometimes we have to stop and encourage ourselves when we feel like we’re becoming depressed or anxious.

“You’ve got to remember the Word tells us to be anxious for nothing, but in all things through prayer and supplication with thanksgiving make your requests known to God and goes on to tell us that He will guard your heart and minds,” said Anderson. “That’s what we need, we need to surrender to heal.”

Anderson says that he always encourages people to keep the faith, especially during these unprecedented times.

By Charles Coleman– The Bolivar Bullet