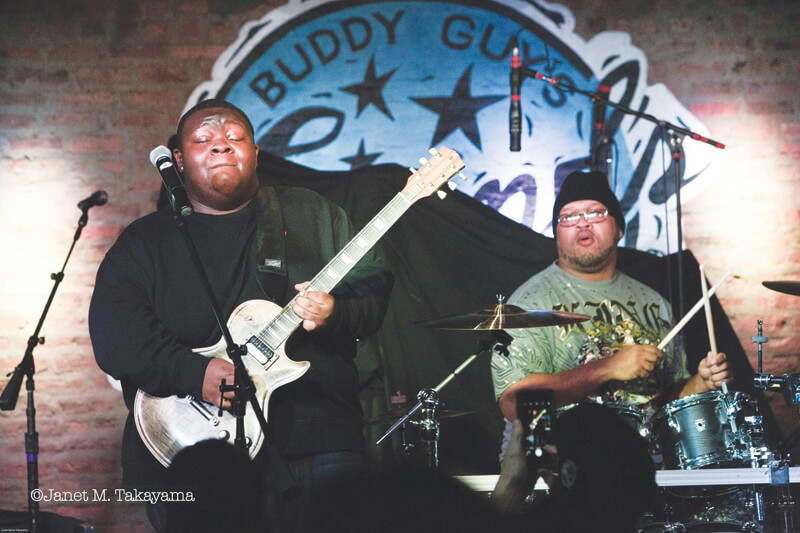 In any great band or behind any singer, there’s the steady and stable rhythm that ultimately holds the music together and keeps the time. The Beatles had Ringo; The Rolling Stones have Charlie Watts; and Clarksdale-native Christone “Kingfish” Ingram has Chris Black.

While “Kingfish” may not yet be in the league of those historic British bands, the 21 year-old blues prodigy-guirtarist has been Grammy nominated and won numerous Blues awards in his short career. And Shelby,MS born and raised drummer, Chris Black, has undoubtedly added to his band leader’s success. Just a few listens to the songs bears out that fact.

Black is a product of Delta State University’s prestigious Music Institute where he double-majored in percussion and audio-engineering, working with the likes of instructor/musician Barry Bays and the man he calls his mentor, former longtime DSU music instructor Dr. Alphonso Sanders.

“When I was there at the Institute on campus, as one of their earliest students, Tricia Walker was the director,” said Black. “I got to work with Dr. Sanders, who I had known since I was a very young man. He would come to my school in Shelby and I got to know him pretty well. I would definitely call him a mentor because he always encouraged me on my playing and, because of him, I pursued drumming full time, earning a scholarship, and now, earning a living. I’ve never had a ‘regular’ nine-to-five job!”

Black began playing drums at an early age being constantly exposed to music while growing up.

“My whole family is musically inclined and we would sing and play in church, of course. My oldest brother, Jim Black, III, was a drummer and I wanted to take after him. I basically just soaked up the music all around me and have played all of my life- -in the school band, through college and now with ‘Kingfish’,” he said.

While playing in a local gospel group and then a country band, Black had his fortuitous meeting with “Kingfish”.

“Actually, I found out later, he had seen me play in the gospel group I was in,” Black recalled, “Apparently, he liked what he heard. After playing on the same bill a few times, I went full-time with Kingfish and the band in the summer of 2016. I’ve played on a couple of tracks on his albums, but I’m his full-time tour drummer. Since he’s gotten out of school, we have played all over the United States and Canada. We had a European tour planned for this year but, of course, the pandemic hit and that brought everything to a standstill.”

The touring band includes four musicians. Black says they hit the road in rented SUVs and play several gigs in a row with only a couple of nights off a week.

While he loves every show, Black has especially enjoyed playing the larger outdoor festivals.

“We played Lollapalooza one year,” he said about the annual festival in Tennessee that draws several hundred thousand people. Paul McCartney, U2 and other bands on that level perform at the annual festival. “It was one of my earliest gigs with Kingfish and it was absolutely amazing to look out and see just a mass of people in the audience– very thrilling and exciting. We were the only blues act at the event incidentally.”

Black says the band has played in New York City several times and they perform frequently in the Los Angeles area because Kingfish’s manager lives there. The band has been the headlining act many times themselves at various shows and festivals, Black said, especially since the Grammy nomination.

“’Kingfish has really become well-known,” he added. “He has a lot of well-known friends in the business, famous players like Buddy Guy. I’ve met a few of these folks from time to time myself. But, it’s great to see how well-known and respected Kingfish has become, especially at his young age, and I couldn’t be happier to be along for the ride and playing with him.”

Black said his playing is influenced by several gospel drummers as well as rock/progressive drummers like Dave Weckl.

“As a musician, you always try to learn something from other players and then put your own distinctive spin on what you’ve picked up,” he said. Black plays on two drum kits: Yamaha and DW, and is currently trying to obtain a sponsorship from one of those famous companies.

So while Kingfish is indeed a brilliant, up and coming young star in the making, when you hear the music or visit the YouTube videos, pay attention to the man providing the backbeat: you’ll instantly know that Chris Black from Shelby adding a substantial dose of talent, finesse and skill to the great music.