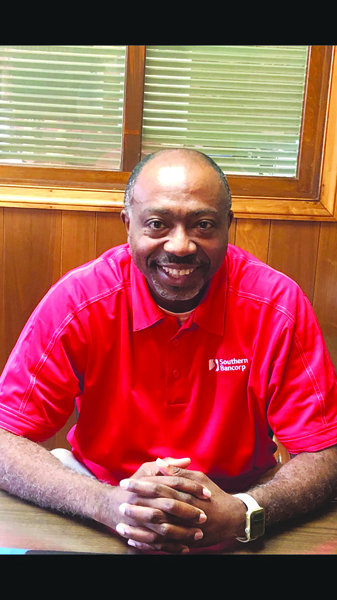 Born and raised in Shelby, Kerenski Robinson took several career detours, but ended up back home–and he’s very happy about that fact.

Currently the Manager and Loan Officer of the Shelby, Drew and Lambert Southern Bancorp branches, Robinson brings a “wealth” of experience to his position. Southern Bancorp, with locations in both Mississippi and Arkansas, describes its mission on the company website as “Focusing on underserved communities while combining traditional banking and lending services with financial learning tools and public policy advocacy to help clients and their communties grow stronger.”

After graduating from Broad Street High School in Shelby, Robinson attended Rust College in Holly Springs, earning his Business Management Degree with a focus on Management in 1996. “I worked my way through college at the Double Quick in Clarksdale and made the drive back and forth from school to work,” said Robinson. After graduation, Robisnon applied for a job at Wells Fargo in Cleveland because he said he wanted a career in banking. While the bank didn’t have an opportunity for him at the time, they did refer him over to Tower Loan in Drew, where he was hired, starting as Assistant Manager. He consequently stayed on with Tower Loan for many years–and with many moves.

“After Drew, I went to Belzoni and then Yazoo City before being promoted to Branch Manager at the Port Gibson Tower Loan where I stayed from 1999 to 2003,” said Robinson. “I was single at the time, but both my elderly parents were ill so I came back home to Shelby every single night–wherever I worked–to stay with them, even from Port Gibson. That was important to me and they needed someone to take care of them,” said Robinson.

Robinson was transferred to the Leland Tower Loan office in 2003 where he worked until 2006. A final transfer found him in Clarksdale before he left Tower to join Southern Bancorp, which was known at that time as Delta Southern Bank before the two organizations merged, to become Branch Manager and Loan Officer of their Drew, Shelby and Lambert locations. “A friend I had trained at Tower had told me that he was going into banking at some point and that I should consider it later and that he’d help me one day. Well, ten years later, he kept his word!” laughed Robinson. “That’s how I ended up in banking. He had gotten back in touch with me.

“I work out of the Shelby office for three days then spend one day each in Drew and Lambert,” said Robinson of his weekly schedule, but added it’s not hard at all to manage all three. “We’ve had our challenges through the pandemic, just every other bank and business, but I have a great staff that works with me so it’s also a smooth transition from one branch to another.”

The 47 year-old said he sees himself staying at Southern Bancorp until the day he retires. And, he’s glad to be living back in the town he grew up in even with the many challenges all small, Mississippi towns have to face.

“My mother worked here at the Shelby Die Company and my father, after he retired from the Army, worked in Rosedale at Amco, a cabinet-building company. They have both passed now. But they were proud, as I am, of the fact that, in my position as a banker, I helped families and businesses try to achieve their dreams and goals. A big part of our philosophy here at Southern Bancorp is to educate our customers through our nonprofit side and I feel good about working for such an organization.”

Married for 17 years to wife Alreeka, the couple have two daughters, ages 14 and 16, who attend Northside High School in Shelby. “I love my hometown and so do they. I truly believe we’ll continue to improve our community and I’m honored to be even a small part of doing that,” said Robinson.