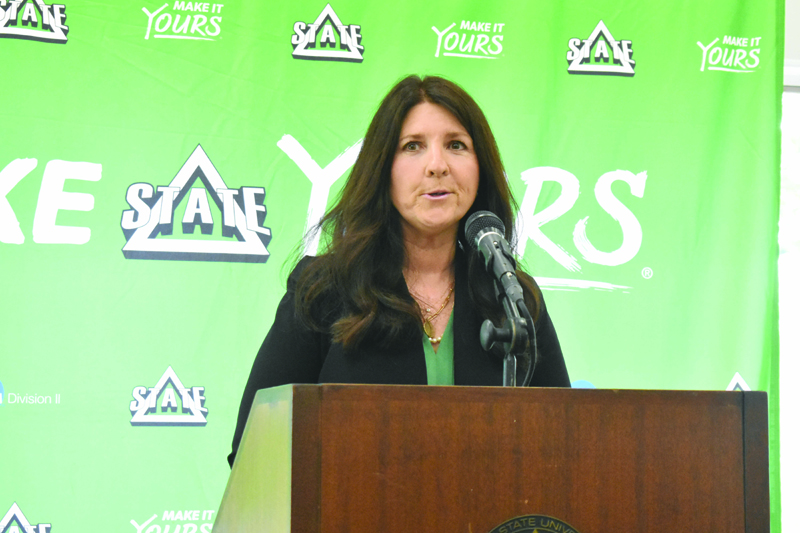 Veteran coach excited about taking over storied program at DSU

After a month long coaching search, a new era has officially begun for the Delta State University Women’s Basketball Program as Tracy Stewart-Lange was introduced as the new Lady Statesmen Head Basketball Coach on Monday (April 18) during a press conference at the Simmons Room of the Hugh Ellis Walker Alumni Foundation House.

Lange will replace previous coach Craig Roden who announced his retirement on March 12 after an eight-year stint with the school that concluded a 43-year coaching career. Fans, faculty and alumni filled the room to show their support as Lange was announced as the coach.

Lange comes to Delta State with an impressive resume. She served as the head women’s basketball coach at Lyon College in Batesville, Ark. In her 17-year tenure leading the program, Lange posted a 366-167 overall record for the Scots with a 234-91 mark in the American Midwest Conference. The Scots advanced to the National Association of Intercollegiate Athletics (NAIA) Playoffs 11 straight years under Lange. Lange was named AMC Coach of the Year four times in her career at Lyon.

Lange, a native of Batesville, Ark., was excited to talk to everyone in attendance and thankful for the chance that DSU gave her to coach the women’s basketball program.

“It is an honor, and I’ve so much to learn from all of you,” said Lange when she addressed the crowd at the press conference. “I want to say thank you for the opportunity and for seeing something in my background that you feel like is a good fit at this time.”

When Delta State University Director of Athletics Mike Kinnison and his staff were looking for a head coach, they wanted an experienced, passionate coach that could excel in big games. They wanted a coach that wasn’t intimidated by DSU’s successful history and would have great expectations for the program moving forward.

Kinnison felt Lange was more than qualified to fill the position.

“I’ve really enjoyed the process of working with her,” said Kinnison. “I’ve found her to be very confident, very comfortable and very calm. She has a calm presence about her that I think leads into confidence. I think she’s very comfortable with who she is, and I’ve enjoyed that and appreciated that. I think she’ll do a wonderful job here.”

Lange expressed her desire to be at DSU.

“I’m going to fight really hard for these young ladies and this program,” said Lange. “The fact that I’m here right now at this moment, I just feel like this is exactly where I’m supposed to be. I feel a calm about that, and I feel that peace and clarity I was hoping for.”

One goal the veteran coach has is for her team to be active in the community.

“My teams will be involved here,” said Lange. “That’s important to me. It’s what I’m about. I hope we will have a great partnership there. We will be out in the community and be giving and serving in anyway we can.”

“Defensively, I think that’s the foundation for me,” said Lange. “I love it. I’m drawn to it. I love players that are receptive to being successful at it. It’s something I’m passionate about. We’ll work very hard to be the best defensive team in the conference. If you do that, you’ll be one of the best in the country.”

“Offensively, I like to play fast and get out and run,” said Lange. “Uptempo is fun to me and fun to coach.’

Lange had been thinking about the recruiting aspect of the job for the past couple of weeks.

She expressed her eagerness to analyze the needs of the team.

“I’m just excited to see what do we have, whose on board, whose ready to go and what do we need,” said Lange. “That will answer where we go from there.”