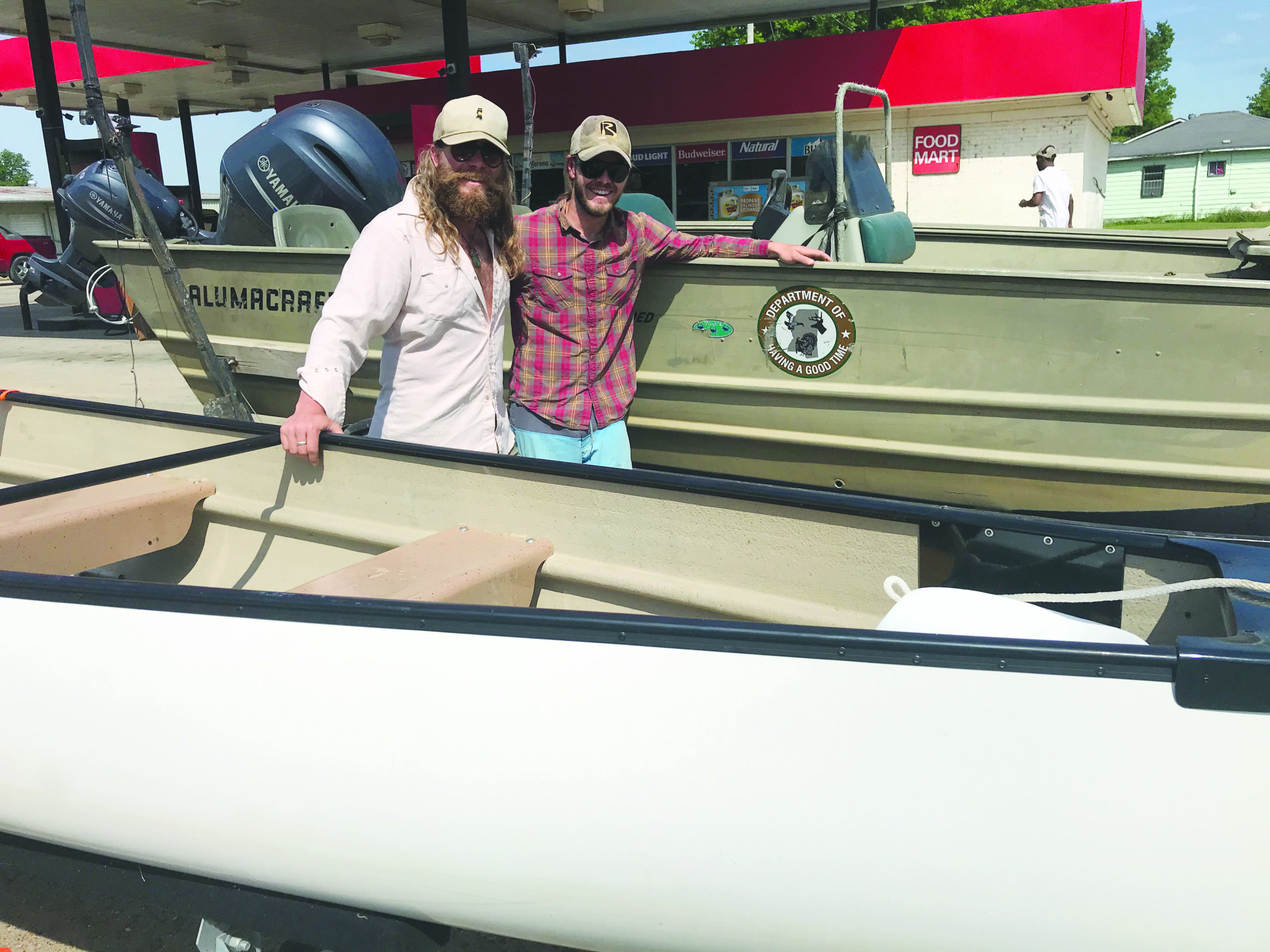 For Bolivar County hunters and outdoorsmen who spend time on and next to the Mississippi River in the Western part of the county, running across people camping on the sandbars is an every day occurrence. And, often these people have traveled down the Mississippi River all the way from Ohio, Canada, and other places exploring this great body of water. During the past decade, many Deltans have also joined this trend, and Delta native Matthew Burdine has had a love of outdoor adventure and the Mississippi River since he was a kid growing up in Greenville on Lake Ferguson.

After receiving a degree in finance and an MBA from Ole Miss, instead of pursuing a career in finance in a big city, he found the mountains were calling him. He was a whitewater river guide and ski instructor in Colorado for ten years.

Then, he got another “call,” and that was to return to his Mississippi roots. In 2015, he did a solo paddle in a 16-foot canoe from the headwaters of the Mississippi River down to the Gulf of Mexico. The trip took six months, and was a fundraiser called “A Million Strokes for a Cure” to raise money for the Breast Cancer Research Foundation.

“It was also a spiritual odyssey,” said Burdine, the son of Sallie and Hank Burdine. “I was seeking that kind of adventure. I never knew what was around the bend. Also, there was the mental aspect of it, how to be out there in extreme wilderness by yourself, being in the elements, relying on your own skills, and to adapting to any situation. I camped on islands, and since I had started in August, I was following the leaves changing colors as I was traveling down river. I was taking my sweet time. The Mississippi River has always been a part of me, but that trip really imprinted something into my heart.”

The Mississippi River is largely undervalued for its recreational opportunities. It drains about forty percent of the continental U.S. and has vast areas that are undeveloped wilderness teaming with birds, wildlife and dense forests. There are thousands of islands with lovely beaches largely untouched by modern civilization. Those islands were where Burdine would camp and enjoy a view of the night sky undimmed by light pollution.

Recently, Burdine joined John Ruskey to launch the Memphis Outpost of Quapaw Canoe Company. Ruskey, an artist, canoe builder and river guide based in Clarksdale, has been taking people from all over the country and the world on river trips for about 20 years. Quapaw Canoe Company is the only Mississippi River guide company south of St. Louis.

Burdine, who has been helping with trips out of Clarksdale,  recently begun operating on Mud Island in Memphis.

Ruskey crafts his own big canoes that take years to build out of cypress. Burdine purchased a twenty-five-foot Voyageur from Western Canoe Company and will be headed back to British Columbia in July to pick up a second canoe, this one is thiry-feet long with a sail attachment. He plans to have a fleet of four to six big canoes within the next year.

Burdine envisions people flying into Memphis, perhaps staying at the famous Peabody Hotel, and then floating three days down to Clarksdale to visit the original Quapaw Canoe Company, which includes a museum of Ruskey’s artwork and canoes he has made or carved. There will also be time to take in blues music in Clarksdale.

The Mississippi River with its big waters and strong currents needs to be treated with respect. It can be dangerous if you don’t know what you are doing. But, Burdine said you are much safer in a canoe than in a twenty- to thirty-foot metal boat going twenty-five miles per hour.

“As guides, we know where the dangers are and what kind of weather we can operate in so we can manage the risks,” he said. “You are safe out there on these big ocean-going canoes. When you get on the river, you automatically go back in time. This primitive way of travel is what makes this kind of trip special. You camp on islands, cook over a fire, swim off sandbars, and paddle together with your crew.”

Another objective is to encourage preservation of a river that is often taken for granted.

“You cannot protect something you don’t love,” said Burdine. “Our goal is to get as many people out on the Mississippi River as possible to show them we have this huge corridor of wilderness right in our back yards.”

It can be the kind of experience that deepens relationships. Groups that have been taken out by Quapaw include families, youth groups, and corporate teams. Quapaw has even had yoga retreats and art retreats. Each trip is customized.

Packages include multi-day trips and day trips, with day trips putting in at Shelby Forest State Park and floating seventeen miles down to Mud Island. While the wild part is fun, so is viewing the skyline of Memphis as you paddle underneath the bridge.

Being a wilderness guide the past ten years, Burdine loves seeing what happens when you take someone into the wilderness. Their eyes change as they experience relaxation and awe.

“It is good being able to show people this world,” said Burdine. “More than ever people are craving to get outside to do these things that are essential for the health of mind and body. To spend time in the river wilderness with friends and family is very special.”

In the early part of the year, visitors get to see songbirds migrating. There is abundant waterfowl such as the majestic great blue heron.

In the fall you have the migratory waterfowl including ducks and geese.

While some think of the Mississippi River as muddy, Burdine has seen it at times when it seems like the Caribbean. The river becomes iridescent in the full moonlight. There is no noise except the occasional rumble of a towboat going by.

“The Mississippi River can be as intriguing as the Grand Canyon,” said Burdine. “It creates the same feelings one feels in deep canyons on whitewater rivers. It is a national treasure. There is no reason people shouldn’t see and fall in love with it. Someone on one of these trips can have their own personal life changing moments. Then they can go back out into the world and make a ripple of their own world. We want to give people an experience to take back to whatever they do in their business or personal lives. For corporate retreats, you come back a strong team when you paddle for a few days.”