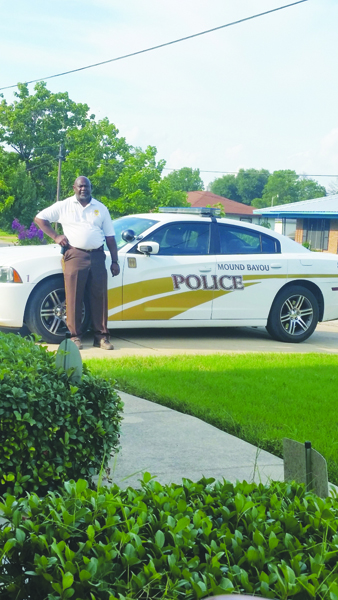 Warren stays close to the people of his hometown

Mound Bayou native and current police chief, Tony Warren brings stability and experience to the community he loves–and loves to protect. “Our force not only knows and helps the citizens within the Mound Bayou city limits, we also patrol and know the people in our immediate surrounding areas, too, and can assist other departments,” said Warren.

“I had always wanted to be in law enforcement,” said Warren, who received his training at Harrison County Police Academy in Long Beach, MS. Starting on the Mound Bayou police force as a dispatcher, he worked his way up into the position of patrolman when a spot opened up. “And then, after I completed the academy training and became certified, I came back to Mound Bayou as Chief,” said Warren.

With a staff of seven part-time patrolmen, Chief Warren said his department, like those of all small communities in the state, could always use more resources. “But we make do with what we have. You have a job to do and you have to go out and do it to the best of your ability, which we do here. We have the occasional problem in town, like a break-in or a domestic dispute, but for the most part Mound Bayou is safe and a town where citizens look out for one another, which helps us on the police force tremendously,” said Warren. “Plus, during the pandemic, we’ve instilled a 10:00 p.m. curfew which keeps the level of trouble down.”

Chief Warren noted that one of the advantages of policing a smaller town such as Mound Bayou is that he knows most everyone in th community which allows for better leverage and ability to deescalate any potentially dangerous situation.

“There’s many times when you can show up to a call and talk people down from doing anything foolish or that they might regret later,” said Warren.

His favorite part of being Chief is not only working with his staff, he said, but also being close to the people who make up Mound Bayou.

“It’s really almost like a little retirement town here,” said Warren. “Of course, we have a rich history, not only in Mississippi but in the whole nation–so it is a privilege to be the top law enforcement official in Mound Bayou.”

A single father of seven children, four of whom live in the Delta, Warren thinks that respect for the badge is not what it used to be and that his job, and the jobs of all policemen and women everywhere, has gotten more dangerous.

“A lot of that comes from just general disrespect for all authority,” said Warren, “not just police officers. But, I love my job very much and I love the people I live with and work for and, at the end of the day, that’s what it’s all about and maybe all that you need. And, I plan on sticking around for as long as I can!”