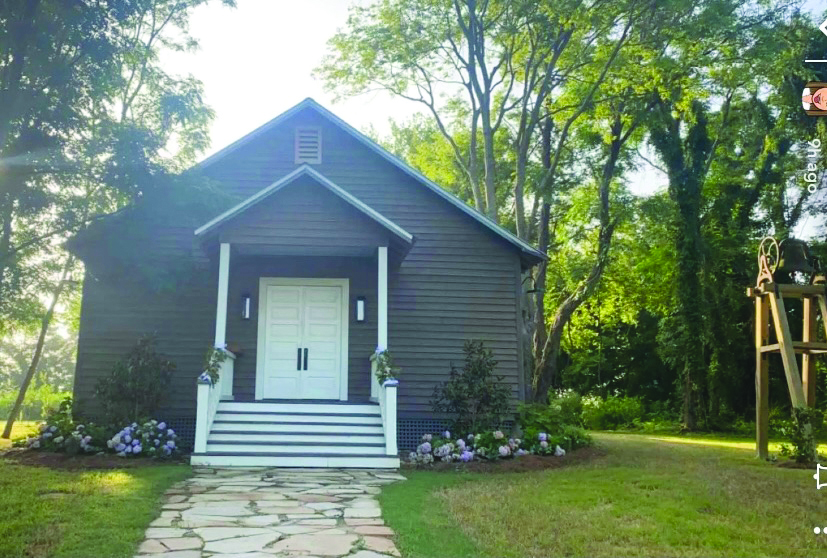 The old Caile Methodist Church, which was moved just outside of Shaw on the way to Indianola on Hwy. 48, has taken on a new life thanks to its current owners, Lars and Cay Ely. The church will now function as a venue for weddings and receptions with its former Sunday School building having served as an Airbnb for a few years already.

The Ely’s daughter, Louisa, who currently serves as manager of the family company, Peacock In The Delta, said her parents moved the structure to their 1800-acre family farm in 2017.

“They initially broke off the Sunday School building and converted into an Airbnb in 2013 and then moved the chapel itself into their Chinaberry grove, and it’s now called the Chinaberry Chapel,” said Ely. “I actually got married in the chapel myself on May 21 of this year. We just recently opened up for public weddings, holding our first not that long ago. It’s been a labor of love for us since 2017 to get the chapel remodeled, adding an antique Rose Window, and we’re very pleased with how well it turned out. People can now rent the chapel for weddings or receptions and we also offer other options on the grounds.”

Ely said the Airbnb venture has been successful with over 600 guests having visited from all across the nation–and the world.

“We have two available options, and have hosted many tourists from Europe,” she said. “There’s even one family that comes here every year to our farm for their family vacation as well as a couple from California who came to stay here years ago and fell in love with our farm. And now, they want to come back and get married here in Mississippi at the chapel!”

The family farm was bought in 1932 by Louisa Ely’s grandfather, James Andrew Ely, she said.

Cleveland resident, Hunter Doty, says his grandmother was a member of the old Caile when it was still holding services–and that he actually attended once as a young child.

“The original church has probably existed for 100 years, at least,” said Doty. “But, the Ely family have redone it beautifully and it looks great.”

For more information on the Peacock In The Delta or renting out Chinaberry Chappel, call 662-721-3001. Also visit, www.peacockinthedelta.com