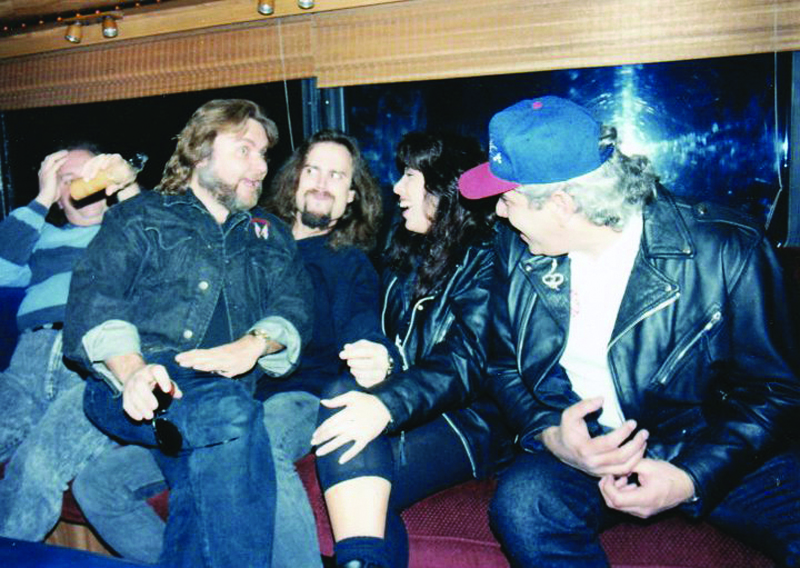 Lynyrd Skynyrd and a life of rock & roll.

How does a kid from the Delta end up traveling around the country and abroad with internationally-known musicians? Paul Abraham tells how he did that, and much more, in his memoir The Gospel According to Abraham: From Delta Boy to Tour Manager. “I had a lot of stories, and people kept telling me, ‘Paul, you ought to write a book,’ so I did.”

Abraham grew up in Leland where his father, Miller Abraham, owned a radio station. “One of his ad reps in Memphis asked my dad if he wanted tickets to go see a new group that was playing in Memphis. The year was 1966 and the group was The Beatles. My dad said sure and he got a whole row of tickets. I think they were about $5 each. My dad took me and my friends to see the concert.” Seeing the crowds respond the way they did was exciting to Abraham and that started his interest in music promotion.

“I attended Mississippi State one year, and excelled in partying, so I transferred to Morehead and worked selling ads for my dad’s radio station,” said Abraham. “My brother, Carl, also worked for my dad. I decided to move to Atlanta to pursue the promotion end of music.”

In March 1974, Abraham went to a club in Atlanta called Funochio’s. A band was playing that caught his attention.

“The lead singer was singing songs about me! Or at least, songs I could relate to, about growing up in the South. I went out the next day and bought their album.”

That album was called Pronounced Leh-nerd Skin-nerd. The band, of course, was Lynyrd Skynyrd, and the album featured the iconic Skynyrd song Freebird.

“I called my brother and said we have to book this band in Cleveland!”

The brothers tried booking the band in the Walter Sillers Coliseum, but it was too expensive.

“We ended up securing the Bolivar County Expo Center,” said Abraham. “We put 40’ flatbed trailers side-by-side for a stage. Rock-n-Roll Audio out of Memphis ran the sound and they ended up being our permanent production company. We were so green, we had no idea what we were doing. We put out signs around town to promote the show and sold tickets for $5 each. We ended up making good money. It was one of the craziest experiences of my life!”

Lynyrd Skynyrd had just finished opening for The Who on their Quadrophenia tour, and the new Skynyrd album was getting good airplay. The band had a day off after the Cleveland concert and decided to hang around the area. “They got hotel rooms in Greenville and we all went to One Block East. We became, and remained, good friends and we all saw each other whenever they were close by.”

The Abraham brothers booked a few more shows, including Freddie King and Wet Willie. “The Freddie King show was great,” said Abraham. “But, the Wet Willie show was a bust. They didn’t like the stage. It was good enough for Lynyrd Skynyrd, but they said no. We had to refund all those tickets.”

After the October 20, 1977 plane crash near McComb that took the lives of Lynyrd Skynyrd front man Ronnie Van Zant along with guitarist Steve Gaines and others, Abraham said he felt lost, unable to be there for his surviving friends in the band.

Abraham got married in 1981 and he and his wife moved to Colorado in 1983. “I had been talking with Billy Powell, the keyboard player for Lynyrd Skynyrd, and he told me that Gary Rossington, the founder of the band was living in Jackson Hole, Wyoming. My wife and I took a little road trip and looked him up in the phone book. We called and his wife said he was at the grocery store. There weren’t many stores in Jackson Hole, so we found the grocery store and then we found Gary around the frozen foods. The first thing he asked me was ‘where is your brother?’ He expected us to be together.”

In 1985, Rossington told Abraham that several promoters wanted him to do a tribute tour for the tenth anniversary of the crash. At the time, Rossington had a band called the Rossington Band that played at the Hard Rock in Dallas along with Boz Scaggs. They also opened for Kansas at the Fox Theatre in Atlanta. Billy Powell asked Rossington about doing a small thirty-two city tour and he agreed. They asked Abraham to run security for the show, and within six weeks they asked him to be the tour manager. “Well, that tour came and went, and ten years later, we were still on the road. I had a great time. Standing on the side of the stage and seeing the audience full of tattooed good ol’ boys and gals was really very emotional. They were selling out arenas. I loved seeing the fans jump up and down and sing along with every song. Lynyrd Skynyrd was a people’s band. They played music and they played the crowd, just like Ronnie Van Zant taught them to do.”

After leaving Lynyrd Skynyrd, Abraham worked with musician Michael Peterson for a year, then Ed King, the guitar player and songwriter for Lynyrd Skynyrd who co-wrote Sweet Home Alabama called. “He said that Billy Ray Cyrus was looking for a tour manager. I wasn’t so sure about it, but Ed convinced me to talk with him. I did and ended up touring with him for a dozen years.” Those years included the young years of singer Mylie Cyrus. “When she was five years old she’d get up on stage with her dad and sing. Even then, she had perfect pitch and a strong stage presence. I knew that kid was destined to be a star!”

After leaving the road in 2010, Abraham began jotting down memories of his time as a tour manager and all the crazy stuff they  did on the road. “I thought I might be on to something, but had no idea how to proceed, so I went to Facebook and posted that I needed help. I asked if anyone could recommend a ghost writer so I could get those ghosts out of my head. In no time I heard from a publisher in Georgia. I sent her the first ten pages and she said she was ‘enthralled.’”

He also wrote of his memories growing up in Leland.

“I wrote about all the crazy things we had to invent to entertain ourselves, because there was nothing to do!”

Abraham’s book is authentic and honest. “I didn’t hold anything back. I told the good, the bad and the ugly, which is why I call it The Gospel of Abraham. It’s the story of my life and the people I’ve met along the way.”

The book has been selling well at area bookstores and on Amazon. Abraham now spends his time attending book signings and readings. “I have spoken at Rotary Clubs, Lions Clubs and at Chamber of Commerce meetings,” he said. “It’s been fun meeting so many people who seem interested in my story.”

Abraham said that people can also contact him on Facebook to buy the book and he’ll send a signed copy.

In addition to rock music, Abraham said his Delta roots have given him a love for the Blues as well.

“I have worked with Son Thomas and Sam Chapman, who were the real deal when it comes to Blues. I’m also a judge for the International Blues challenge at the Blue Biscuit in Indianola.”

It’s been a wild ride for Abraham, who said he wouldn’t have done anything differently. “I’ve had a great career and lots of wonderful memories. I hope folks enjoy reading about them in my book.”