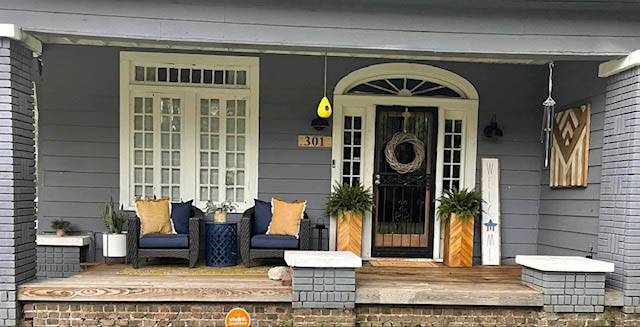 Resident encourages others to show pride

There’s a spirit of positivity happening in Rosedale and it started with Nikki Reed Hughes and her social media post. Hughes put a community invitation out to the public.

“With so much gloom and doom in the world, I needed some summer vibes,”  posted Hughes on her Facebook profile. “Come sip some good ole’ sweet tea with us on the front porch.”

And, the rejuvenation of her front porch began. Hughes said she had always loved design, even as a child, so redoing her outside space came very natural to her, and it uplifted her spirits from all the tragic things going on in the world today.

“It was just the culmination of so many things,” said Hughes. “Watching the news and hearing about the war in Ukraine and the gun violence happening all over the country, sometimes it’s just too much. My entire family is from Rosedale, but I grew up in Chicago, so hearing about the violent crimes going on there, I just needed a break from it all. So, I had to do something. I have a son who lives in Los Angeles, and I’m always worried about him; I have a son who’s a police officer in Houston, so needless to say I’m always on alert; I just needed to find a spirit of positivity that day and getting outside and redoing my front porch was just the thing.”

Hughes said that particular day, she turned her TV off and turned her jazz on, and made a decision.

“I got outside and got in a mood of positivity. I pressure-washed my porch, put out my new pillows, because I try to change them with each season, and got to work.”

And, that’s Hughes’ mindset now, for the most part. Positive and upbeat, no matter what’s going on in the world.

“While I was outside, redoing the porch with the jazz music playing, people were riding by and waving and smiling,” she said. “It was just a great feeling. And I think we need more of that.”

Hughes said she believes it takes just one small spark to ignite that same good feeling in our neighbors and friends.

“I thought, maybe if I do it, it’ll motivate others to get in the spirit of community involvement and beautification,” she added. “It’s just a small thing, but it’s a positive thing. And inviting folks to sit on the front porch and sip on some sweet tea seemed like a grand idea.”

“When I read Nikki’s social media post, I just thought it was the greatest thing. She was promoting positivity in this world that is sometimes so scary and dark. And the invitation to sit on her front porch and have tea with her was just so open and friendly.”

Hoskins added that single social media post motivated her to speak with several people about maybe turning Hughes own positivity into a community effort.

“We’re looking at what we could do as a community to involve everyone in this motivational spirit,” she said. “And if we could get this trend of positivity going, there’s no telling how we could help and improve our community. It starts with baby steps and we’re excited.”