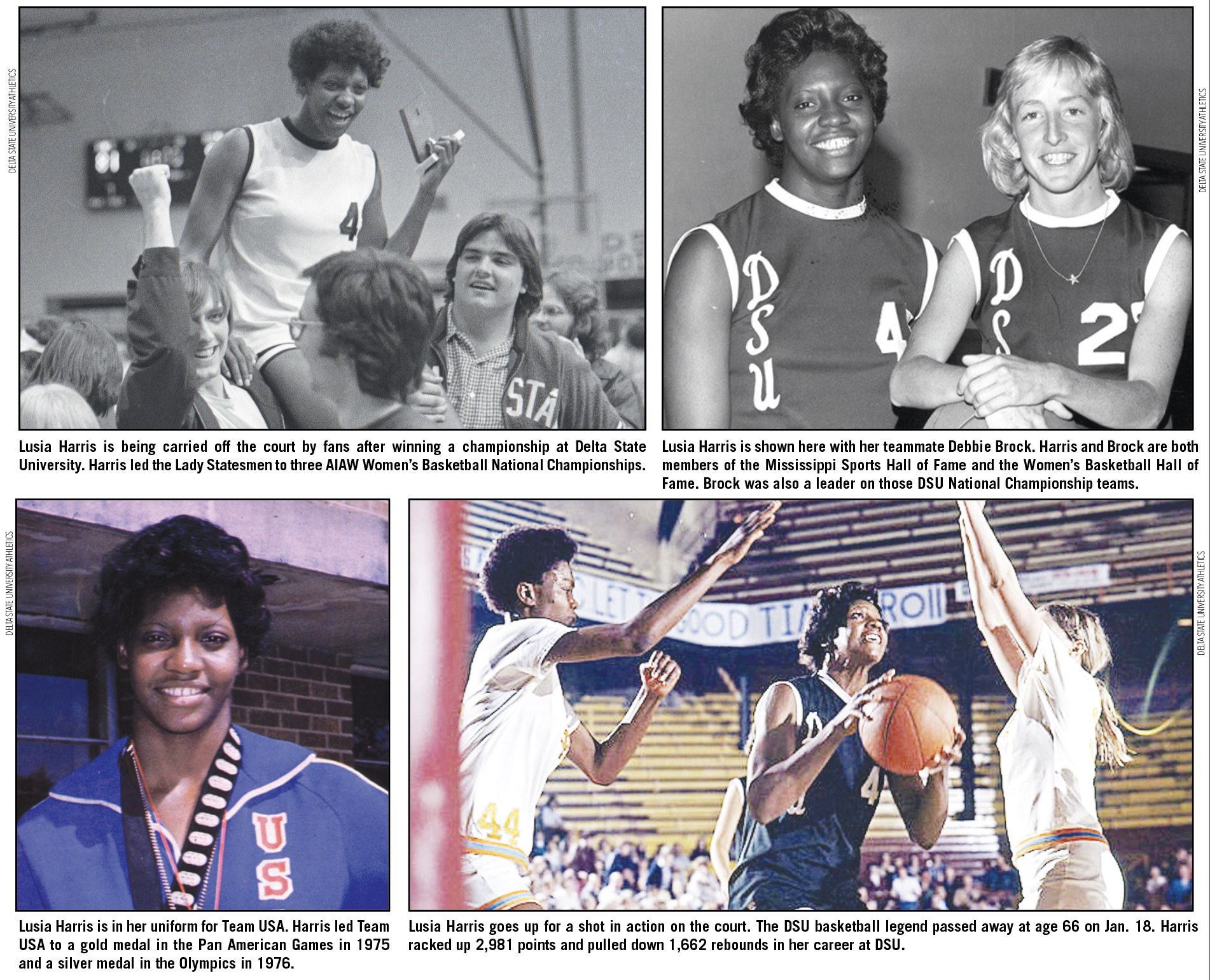 Lusia Harris put her stamp on women’s basketball at DSU

The news of the passing of Delta State University basketball legend Lusia Harris on Jan. 18 marked a sad day for the DSU community, the state of Mississippi and women’s basketball across the country.

Harris’ playing career was second to none as she led the Lady Statesmen to three AIAW National Basketball Championships from 1975-77. She led team USA to the gold medal in the Pan American Games in 1975 and led the team to the silver medal in the 1976 Olympics. She was the only woman officially drafted by the NBA as she was selected in the seventh round of the 1977 NBA Draft by the New Orleans Jazz. Her career helped bring notoriety to women’s basketball and paved the way for many women that have made a name for themselves in the sport over the years.

Harris’ career as a member of the Delta State University Lady Statesmen is remembered fondly. Players, past and present, that have suited up for the Lady Statesmen over the years at one time or another were positively impacted by Harris. Whether they knew Harris personally or just knew of her, Lady Statesmen players over the years learned about her and learned from her accomplishments.

Burnadette McDonald, Mississippi Delta Community College’s Assistant Athletic Director, played basketball at DSU from 1984-87 and served as a full-time assistant coach at the school from 1990-99.

She was saddened by the news of Harris’ death.

“I’m just heartbroken,” said McDonald. “It was such a shock and such a surprise.”

McDonald, a native of Madison who graduated from Madison-Ridgeland High School in 1983, said Harris made an impression on her right off the bat.

“Lucy came to Madison-Ridgeland High School and signed me, because Coach Lloyd Clark had gotten the job and he had offered me a scholarship,” said McDonald. “At that time, Lucy was there serving in the assistant role at Delta State.”

“She was just a gentle giant,” said McDonald. “That’s the best way I can put it. She was soft spoken. Even after Delta State when I would run into to her from time to time, she didn’t talk noise but was impactful on what she had to say.”

Leslie McKiernon-Jenkins, who played basketball at DSU from 1990-93, learned the importance of the legacy established by Harris and Wade.

“When I chose Delta State, I knew the history behind the women’s program but was not quite aware of the impact Lucy or Coach Wade had on the game as a whole,” said Jenkins.  “Of course, we were reminded daily while practicing in Sillers under all the championship banners how important it was to continue the tradition started by Lucy and her teammates.”

Theresa Perry-Rash, who played basketball at Delta State University from 1992-95, was hungry to know about Harris and the history of the DSU program once she was on the team.

“I started to ask questions about who did this and who was playing back then,” said Rash. “That’s when I learned of Lucy Harris. I want to give thanks to Lucy Harris for paving the way for me. She was the reason why I had an opportunity to play basketball at Delta State University. I told her this last year when I got a chance to take a picture with her and talk to her.

“Once I learned how awesome she was that’s when I started to realize that I’m definitely at a good school. I felt like I came to the right school. To come behind a person like Lucy Harris, it means so much to me. I am just so grateful to be able to be a part of a basketball team that has such a good rich history in women’s basketball.”

Rash learned that basketball wasn’t the only thing in common she had with Harris. They were both members of Delta Sigma Theta Sorority, Inc.

Shorlone Crockam-Green, who played basketball at DSU from 1990-93, said Harris set the standard in women’s basketball.

“Lusia Harris paved the way for women’s basketball,” said Green. “She demonstrated how champions should carry themselves. Her desire, determination and love to be the best carried over into every Lady Statesman that put on that green and white uniform. She built an image and a legacy to be proud of.”

Even though it’s been 45 years since Harris dominated the court at DSU, a new generation of people are still wanting to learn about her. A documentary released last year titled “The Queen of Basketball” is about Harris. Harris is DSU’s all-time leader in points scored (2,981) and rebounds (1,662).

Members of the current Lady Statesmen team are in awe of Harris’ accomplishments.

“Miss Lusia was a pioneer here at Delta State,” said freshman guard/forward MaKenzie Hill. “She made a great impact on basketball and women’s sports in general. The impact she’s had on us here, we aspire to be as great as her and win championships just like her.”

Zyaire Ewing, a senior that plays center for the Lady Statesmen, said she really started to learn about the impact Harris made on women’s basketball once she got the chance to meet her.

“I actually didn’t even know who she was until last year when I got a chance to meet her,” said Ewing. “Then, I started looking at videos and different stuff like that. She was a legend in women’s basketball. She played the same position as me. She was dominating in women’s sports period. It was a good chance to get to meet her. She set a high standard in women’s sports.”

When news outlets all over the country were reporting about Harris’ passing, the respect Harris garnered across the nation left a lasing impression on Ewing.

“It’s amazing,” said Ewing. “Just to see on the Internet and the WNBA posted about her, it’s crazy that I’m actually attending the same school that she played at. Hopefully, they can make a Lucy Harris award, and I can get it.”

Jenkins felt the name of the documentary was an appropriate title for the person it featured.

“As the years have passed and even more young ladies have come through the program, I can look at the record books and it is so very evident to see how phenomenal Lucy and her accomplishments really were,” said Jenkins. “I’m not sure any of her records will  ever be broken at Delta State.

“The game has certainly grown since Lucy played but if it were not for the foundation she helped lay, Delta State Lady Statesmen basketball and women’s basketball in general would not be what  they are today.  She was the beginning.  She was and will always be the ‘Queen of Basketball.’ The fact that I got to be a small part of her legacy is not lost on me. The legacy she left for all future Lady Statesmen should never be forgotten or taken for granted.”