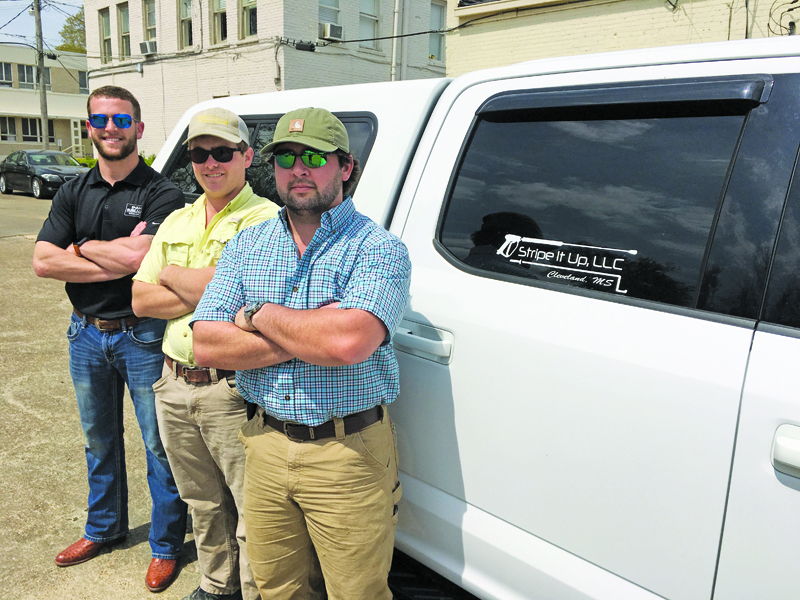 Young Entrepreneurs Bring A Much-Needed Service to the County

From pressure washing to striping parking lots, warehouses, or anything else that needs a distinctive designation of space, Stripe it Up LLC (www.facebook.com/StripingItUp) has been making a name for itself in and around the Cleveland area.

Three young men, Parker McNeer, Hunter Kovac, and Brandon Cummins, are the Stripe it Up team and according to McNeer this idea came together because there was a need for the service.

“We had been doing a job annually that caused us to look at the bigger picture,” said McNeer. “There was a real need for what we were doing. And the three of us are hard workers, and we already had the pressure washer trailer, so in 2017 we formed the LLC and started out washing parking lots and striping new parking lots and repainting parking lots. After that we picked up washing some commercial buildings and residential homes and driveways.”

McNeer added that Stripe it Up also does roofs, cleans windows, both commercial and residential, cleans concrete, sets parking bumpers in parking lots, and can stripe any area that needs it for whatever purpose.

“Seeing the need, we decided to take a leap of faith and just go for it,” he said. “And the need was and is real. We not only stripe parking lots, we have done indoor warehouses and really just anything that has needed mark-off lines, such as handicap spots. If it’s parking lot paint, we can do it.”

McNeer also works for his father, who has mini-storage buildings in Cleveland, but someday hopes that Stripe it Up will be his sole occupation.

“We’re based in Cleveland, but we have done jobs in Clarksdale, Greenville, we did one over at the Port of Rosedale, and we’d like to do more all over the Delta and maybe surrounding areas such as Oxford and Starkville,” said McNeer.

Kovac, Plumbing Supervisor and Master Meter Operator at Delta State University, agrees with McNeer. He hopes Stripe it Up will grow exponentially so that he can devote all of his time to the business.

“We started the business to have extra income,” said Kovac, “But we all really love doing it. And as someone already in the service business, I’m all about pleasing the customer, so that part of the job comes naturally. It’s a great feeling to have customer satisfaction and we all enjoy giving great customer service. And I never realized until we started doing this, how needed it was in our area.”

Cummins is an insurance agent with Farm Bureau.

“The business has really taken off already more than we assumed,” said Cummins. “We did it to create some weekend money, and the demand became greater, so we bought new industrial equipment where we can do large jobs. In just a few days, we did all of downtown Ruleville, which was over 300 parking spots and we did it in two days.”

Cummins says that it works out having three partners, because they all do have full-time jobs elsewhere. “The machine can be run with one person, so if one of us has free time they can go do the job, or when one of us is getting off work, we’re available to take over. So, it really works out for us and we never have to break stride.”

Cummins said they also have access to a lift, which allows the team to work on multistoried buildings.

“We’ve done buildings as high as thirty-five to forty-five feet off the ground, so buildings that some people might think we can’t do, we do have the means to take care of those as well. We’ve done very well this past year; we’ve been very busy. And we’ve gotten great feedback from our customers and are very thankful for that. We look forward to continuing to serve them and new clients as well.”