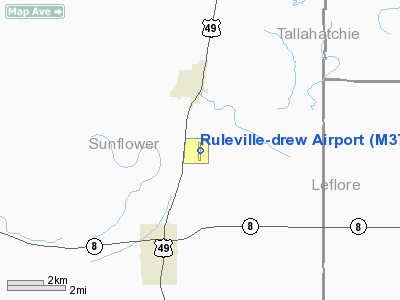 The Ruleville-Drew Airport recently underwent upgrades that bring more overall efficiency and aesthetics to the airport. Zac Tollison is a local farmer and pilot himself, and along with Buddy Weeks and Fletcher Clark, the three make up the Board members for the airport, representing the city of Ruleville, Drew and Sunflower County which all jointly operate the airport.

Tollison said he was elected to the Board in 2020 and prior to himself, Freck Luna filled his position and was instrumental, along with Weeks and Clark, in obtaining the upgrades and also in bringing some very important income-producing assets to the airport.

“They applied for some grants to build some T-hangars,” said Tollison. “Prior to the T-hangars being built, the airport didn’t really have any source of income. We had some Ag pilots that used it and a few other pilots who paid a small fee to use the runway, but we really didn’t have a viable source of income at that time. So the airport received that grant and we built four T-hangars and then about four years after that, we received another grant to build four more T-hangars. A few years later we built more and bigger hangars, and these hangars are all leased out and bring in revenue for us now.”

Tollison said since the time he was elected to the Board they received a grant to repave their entrance road, grants to update the Papi System, which is short for precision approach path indicator, and upgrades to the runway lights and the runway itself.

“Basically the Papi System is a visual aid that provides guidance information to help a pilot acquire and maintain the correct approach to an airport,” he said. “We also upgraded the airport’s runway lights to LED’s and resealed the runway and laid down new stripes and numbers. We’re also in the process of building a new FBO, which is a flight briefing office, something we’ve never had before. It will be a huge asset to us as well as other pilots.”

Tollison said these upgrades were very necessary and will be beneficial for the airport.

“For a 12 month period, we usually have anywhere from 10 to 12,000 different general aviation aircraft that use our airport,” he said. “From DSU students to North Sunflower Hospital to Ag pilots; so the need for these upgrades was there. The airport is a huge asset to North Sunflower County and to the towns of Ruleville and Drew. Serving on this board and helping to make the airport better is a real pleasure and honor for me.”

Tollison said the basic job of the Airport Board is to make views and recommendations on any kind of maintenance that needs to be addressed.

“We also promote and plan for the utilization and growth of the airport, inspect the grounds and equipment, approve budgets, contracts, hangar leases, and assist the airport manager, who is also Buddy Weeks, our board member, with any day to day tasks he may have,” said Tollison. “We’re very proud of our airport.”