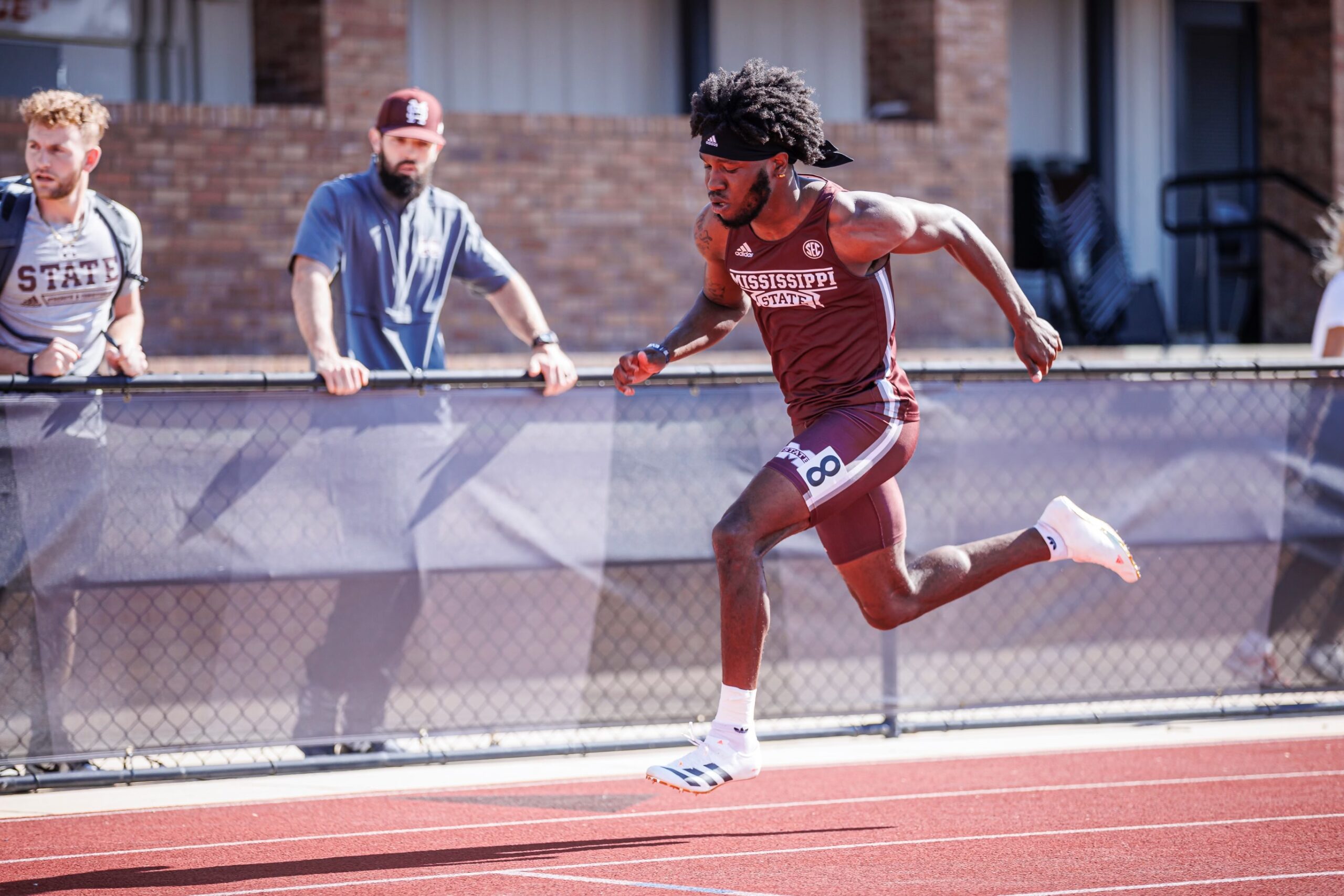 Daniels Sprinting to Excellence at MSU

During his high school athletic career in football and track, he was the consummate athlete.

At Broad Street High School, he was a standout football player and track star.

In track and field, his efforts played a key role in the Gators winning the 2A State Boys Track and Field Championship in 2019 which was during the school’s first year of existence.

In football, he was the top running back for Northside as he led the Gators to two straight winning seasons with the team going 14-1 and advancing to the 2A State Football Championship game where they finished state runner-up in 2019.

His hard work didn’t go unnoticed as the 2020 graduate of Northside High School signed to run track and field at the Division I Mississippi State University in Starkville.

When it came to playing collegiate athletics, track and field turned out to be the best option for Daniels.

“Initially, I wanted to play football,” said Daniels. “It was my first choice, because obviously I was a good player and I knew that I could excel in football. I also felt like I could excel at track to. I wanted to do track to prove to people that I could be a two-sport athlete or I’m not just a football guy. I felt like I wanted to make a name for myself in something other than football to just show people that if you put your mind to something you can accomplish it.”

In his two years at MSU, Daniels has continued his hard work as he has made progress as a sprinter for the Bulldogs.

Daniels said he had to turn up his work ethic to compete at MSU.

“In high school, you can slack off on certain things,” said Daniels. “If you miss more than three to five training sessions in the fall in college, it will affect your whole spring training and what you do on the track. You have to know what you can and can’t do. You can’t party that much, and you have to have the correct amount of sleep and hydration. You have to watch what you eat. Sleep, hydration and what you eat are the main things that really matter in college track. If you don’t do those kind of things, it’s going to be hard to excel or break the barrier that you want to break.”

“His work ethic is impressive,” said Woods. “He still has a lot of room to grow within the sport, and I am anxious to see his growth in its entirety.”

During his first year, Daniels had a knee injury he had to battle through.

“I had something in my knee that was bothering me,” said Daniels. “I had to have surgery after the season.”

This year during the indoor season, Daniels ran a personal best time of 7.20 seconds in the 60-meter dash as he finished 12th at the UAB Vulcan Invitational at Birmingham, Ala. on Jan. 15.

To compete this season, Daniels still had to overcome some injuries.

“I was having a decent fall session this year, but I twisted my ankle,” said Daniels. “Once I twisted my ankle, my whole left leg was really bothering me. I couldn’t really get any drive or bend my leg for almost two months. Then, my hamstring started tweaking a little bit, so that’s another two to three weeks that had to be spent rehabbing. I finally worked my way back towards the end of the year, but it was kind of too late.”

Daniels said the SEC is one of the elite conferences around.

“The SEC is one of the hardest conferences in the world,” said Daniels. “You have to be on your A-game every track meet and every conference meet or you’ll get embarrassed.”

Woods was happy with how Daniels handled adversity with his injuries.

“I am proud of how he battled back throughout the year and put himself in a position to compete in the post season,” said Woods.

Daniels has been pleased with the coaching he’s had during his career at MSU.

“My position coach, Coach (Mark’Quis) Frazier, would ask me how I’m feeling because he knew I was battling injuries each week,” said Daniels. “If I tell him I’m feeling good enough to go, he’ll make me do certain reps or make me do certain things to watch the injuries before they get severe. He’s a good coach and a pretty good man. He’s knows what he’s talking about with track and field. I believe if I’m healthy enough next year, he’ll teach me in the right direction to help me extend my career.”

For Daniels, the road to being better next year starts with how he takes care of himself on a daily basis.

“I drink water, but I like drinking Powerades and Gatorades more,” said the 20-year-old. “I don’t drink as much water as the coaching staff would like or as much as I need. So, I’m going to do a better job next year at staying hydrated. I’m also going to start cooking. I”m a terrible eater when it comes to things like that. They want us to eat healthy, and I don’t eat healthy. I eat fast foods through out the months. I rarely cook, and I just don’t do the small things necessary for me to take a big step. I barely eat fruits or vegetables unless I’m at a track meet or something like that. I feel like if I take care of those things and go to bed at a convenient time, I won’t get these small lingering injuries that show up every fall and consistently come out of nowhere. I feel like I can be in good standing next year when conference rolls around.”

Woods felt Daniels’ future at MSU is a bright one.

“I absolutely believe that Sema’j has the talent and skillset to be a Division I First Team All-American as well as graduate with distinction among his peers,” said Woods. “He truly has the potential to be a special human being to his family and his community.”

In the classroom, Daniels is majoring in Kinesiology. He was the valedictorian at Northside in 2020.