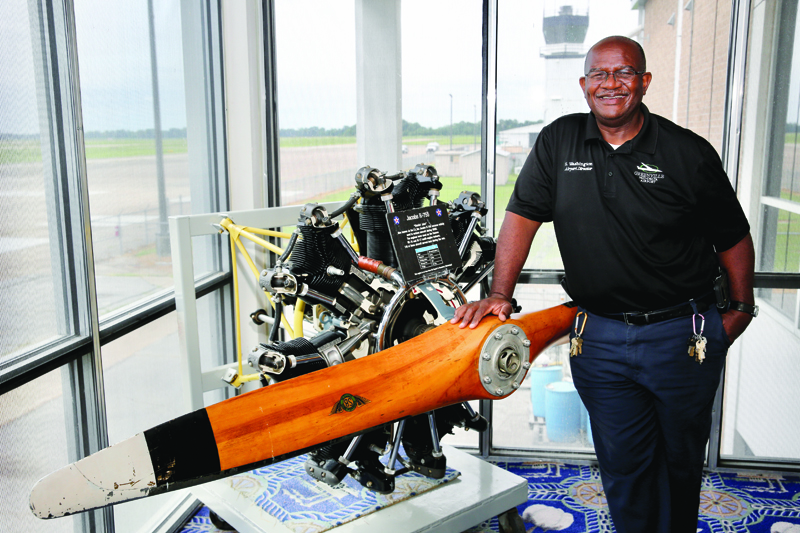 Sam Washington has had a fascination for aviation since he was young. Growing up in Yazoo County, his first job at age eight was as a field hand chopping cotton. But, he had his sights set on the skies and pursued education and management jobs that prepared him for his current job as director of the Greenville Mid-Delta Airport.

“This airport is a tremendous asset to Greenville and the surrounding area,” said Washington. “Unfortunately, in the past, the airport hasn’t seen the level of investment that would make it a true driving force for the economy of the area. Since I’ve been here, I have seen a trend towards investing in the airport. When we get things up to speed and are able to attract more big businesses who need the services of the airport, it will be a tremendous asset.”

Executives of large companies don’t typically travel on commercial carriers. They usually have private aircraft or use private charter services. Washington says that is why they are working hard to make the airport an attractive place that is fully functional and able to serve the needs of the business community.

“I see great things in the future,” said Washington. “It is still going to take time. We have a fair amount of ground to cover. But, once we can get our improvements in place, the airport is going to be a true attractant and economic driver for the community. And that is exactly what is supposed to happen.”

“We are trying to make this airport be what it ought to be,” said Washington. “My goal is to get this airport to self-sufficiency in the next five years with enough business and enterprise from the airport that the revenue stream will support the airport. With the steps that are being taken, I’m confident these investments are going to pay off for us.”

Like every airport in the country, the Greenville Mid-Delta Airport faced major challenges during the pandemic when air travel dropped off precipitously. Before the pandemic, the airport had routes going to Dallas and Atlanta. Atlanta was one of the first large cities to shut everything down. They weren’t allowing anyone to fly into the city, so the Atlanta route went to almost zero.

“We were just sending empty flights over to Atlanta for about six months,” said Washington. “When they finally started allowing people to fly, our numbers were still low. We made a decision in September 2020 to move back to Nashville because it wasn’t as restrictive as Atlanta. That had an almost immediate impact with the numbers picking up.”

Now the airport is roughly carrying about the same number of passengers as they were before COVID. Planes are carrying a 60% to 70% load fairly consistently. If that trend continues the rest of the year, Washington expects they should be up to about 4,000 passengers for the year.

“The numbers have come back nicely,” he said

Washington’s current highest priority is to get the airport up to complete compliance with FAA requirements for the airfield, including making sure navigation systems and lighting are working properly, and that the runways and taxiways are in good shape.

“We are working hard to make sure we get that done,” said Washington. “We have had our share of issues, but we are making good progress. We are coming along.”

There are two grants in process including one for $368,000 to improve electrical systems in the commercial hanger. That project should be going out to bid soon. The airport also has been approved for an airport improvement program grant to enhance taxiway Bravo. Some shoulders have grown up and are corrupted with grass. Plans are to remove the shoulders, replace them with sod and repaint the lines. That work is set to begin soon.

In May they completed replacing bad concrete areas on the apron, which is where aircraft park. They have applied for another grant of about $316,000 to do water line improvements near the terminal.

Three grants from the FAA ranging from $59,000 to $69,000 received as part of COVID relief packages were very welcome.

“Thankfully airports weren’t left out of COVID relief,” said Washington. “The first was used to buy personal protection equipment (PPE), conduct sanitation efforts, and cover operational expenses. The second grant was for the contract tower and to buy other equipment. The last one just approved will be used to shore up our operational budget to make sure we are covered everywhere. Fuel prices went up dramatically and that really hit us. We have had a fair number of repairs we had to do to different pieces of equipment. Grants have definitely come in handy for the airport because COVID had a huge impact on us.”

Several employees including Washington came down with COVID-19. One employee passed away from COVID. Ongoing, they are still using lots of PPE, hand sanitizer and disinfectant cleaners. Currently all employees have been vaccinated.

“So that is a relief,” said Washington.

Washington grew up on a farm northwest of Yazoo City where his family lived until 2018. After being educated at the Humphreys County School System in Belzoni, he attended Mississippi Valley for two years before finishing his degree in management at Delta State University (DSU) in 1986. After college he spent a brief tour with the U. S. Air Force and also worked at a convenience store in Texas before coming back to to Mississippi where he got a job with the Yazoo County Department of Human Services where he worked from 1989 and until 1993.

He left that job and later took a job in accounting for the Mississippi Board of Nursing in Jackson. He worked there from 1994 until 2003, and the job morphed from just doing accounting to handling all the purchasing functions. In 2003, he took a job as director of purchasing for DSU. While there he took the opportunity of free tuition for employees to earn two master’s degrees, a master’s degree in business and a master’s degree of commercial aviation. In 2010 he left to open his own consulting company.

Washington became a management instructor in the aviation department at DSU in 2011 and also did a part-time stint with the Vicksburg Municipal Airport for three years. Washington took his present job in Greenville in 2018.

Back in high school, one of his role models was his agriculture teacher, James Brown.

“I enjoyed his passion for farming,” said Washington. “Another very special person to me was Lonnie Haynes, superintendent of education for Humphreys County. He was a great mentor. I played in the band and he was also the band instructor for my first two years. I spent many nights at their home because we lived so far away. His son, Byron, and I call each other brothers.”

The Washingtons have two adult children. Their son, Justin, is in the Army Guard in South Carolina. Their daughter, Courtney, works in athletic compliance for Texas A&M-Commerce. They also have two granddaughters and a grandson.

Washington is also pastor of the Cornerstone Christian Worship Center in Cleveland where he not only preaches, but takes care of the property. That combined with home projects doesn’t leave a lot of time for other activities.

“My number one hobby, though I don’t get to do it much, is flying,” he said. “I do own a small airplane. I like to hunt and fish, but I rarely get a chance to go. So flying is pretty much my hobby now.”