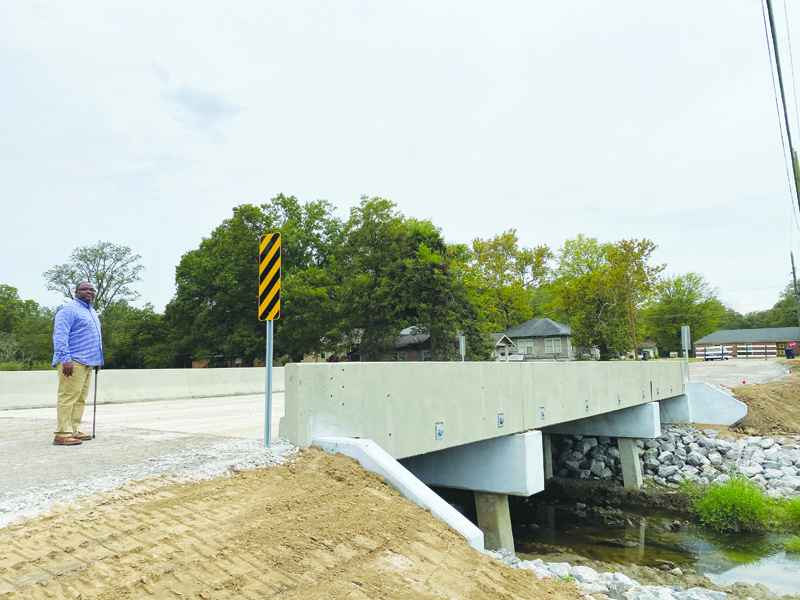 Residents are relieved by the news

This past Friday a celebration took place that marked the reopening of the only bridge in Shelby that connects the east and the west half of the town to the great relief of the residents who have gone to unusual “lengths” to live without. In fact, citizens had to use a detour route that consisted of several miles to reach their houses on the “the other side of the lake” as Shelbians refer to it.  The county built a small walking bridge so residents could park on the east side and walk to the west side. The effort to replace the bridge, called Bridge 200 which goes over Holmes Lake on Second Avenue in Shelby, was one pushed diligently by the Bolivar County Board of Supervisors, particularly from Bolivar County Supervisor Olando Morton and Bolivar County Administrator Will Hooker.

“It’s a county bridge, that happens to be located in the city limits of Shelby, and heavily traveled,” said Josh McPherson, Engineering Manager for Eley-Barkley Engineering and Architecture in Cleveland and the County’s engineering firm. “It’s been a hot topic for a long time to get it fixed and I’m glad to report that we’re finally there. The contractor is ahead of schedule by over three months and we’ve had outstanding support and leadership from Supervisor Olando Morton, who I’ve been talking to weekly, to expedite the work. He’s really been on top of this project and it was actually his idea to provide the walking bridge for citizens to use. The walking bridge has had a significant amount of use and helped relieve some of the burden for the local citizens” said McPherson.

“McBride Co., LLC is the contractor on the project and, again, they came in way ahead of schedule,” said McPherson. “The bridge is finally completed and we’re working on all the approaches. And while it is now open, it won’t be paved until the first week of November. It’s currently covered by gravel and we’ll have to close it again for about two days to pave it with asphalt.”  The total cost for the project was $631,624.25.

“The bridge needed to be replaced,” said McPherson. “It was over 80 years old and was on its way to closing and had been posted for load restrictions. The County was extremely proactive and applied for Emergency Road and Bridge funding for the project, obtaining $650,000 to repair it. And it came in under budget. Plus, it will be there for at least another 80 years.”

“As the Supervisor of District Three, which includes Shelby, the bridge really needed repair because it was located in a residential area, not a rural one, and citizens were greatly inconvenienced by having to detour and take other routes,” said first-term Supervisor Olando Morton. “The bridge itself, which leads to the Post Office and other important destinations, is not even a mile long, but people had to take seven or an eight mile detour to get around it. So, I came up with the idea of the walking bridge and the other Supervisors and I had talks about it and got it approved. I was personally concerned about the possibility of school kids falling in the lake if there were not a safe way to walk over it. So, I’m very excited and proud of the fact that we got the bridge built. And, by the way, it has an unlimited weight limit as well.”

“This is very exciting for the Shelby community,” said County Administrator Will Hooker. “And, I must add that the response rate to getting this new bridge up by the Board of Supervisors was unprecedented. Fifty percent of Shelby’s citizenry, if not more, were adversely affected by the closure of the bridge and even though we created an alternate bypass it was still a hardship for so many of the residents. We were very elated to open the bridge last Thursday afternoon which will help these folks so very much and also excited by the fact that the new bridge will be wider, higher, more sturdy and meets today’s standards. Again, I can’t say enough about the progressive vision and leadership that the Board showed in obtaining the grant to repair the bridge.”