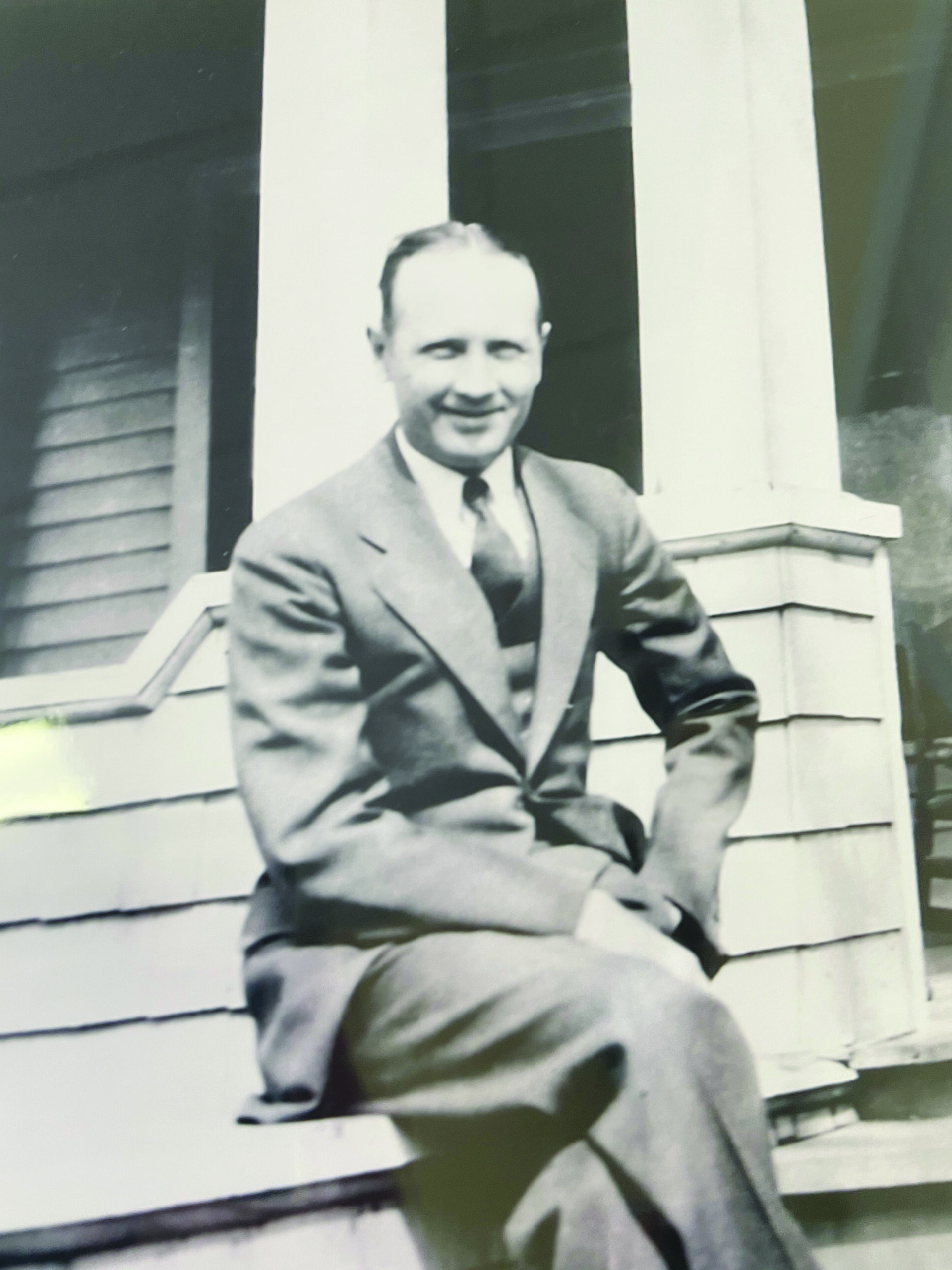 Scott Morrison is a name that is sketched in the minds of many former Shelby, MS residents.

The longtime mayor helped place the small Bolivar County town on the map and guided it for many years (1933-1945 and then from 1949-1969) with a firm and steady hand. First, by recruiting commerce and jobs to Shelby and, secondly, by his strong sense of fair-play and right and wrong.  In other words, Morrison was one of those mid-20th Century figures, men Tom Brokaw famously coined “The Greatest Generation,” who embodied values and morals seldom if ever seen in the modern political world.

Bill Rose, who grew up in Shelby during Mayor Morrison’s tenure and later went on to work at The Miami Herald, has many memories of Morrison.

“My father ran the corner drug store on Hwy. 61,” said Rose. “And, Mayor Morrison owned the hardware and lumberyard nearby. He was one of those classic, small-town mayors who took over a thankless job and did noble work in it when he didn’t have to do so really. He was also a businessman. Mayor Morrison’s entrance into politics was fueled by a sense of public duty, obligation, noblesse oblige or, what we call now, ‘giving back.’ He was also one of the best examples of those Southern mayors who governed over these smaller towns and helped them run and succeed for many years. He loved Shelby, he loved the land, and he felt that he should serve. I think it was a strong mix of patriotism and citizenship that, sadly, are too often lacking today.”

Rose also remembers how upfront and honest Mayor Morrison was in those days.

“There was absolutely no cut-throat, back-room deals with Scott Morrison. None at all,” he says. “He could not be bought, he just wasn’t that kind of man. Actually, he was a gentle soul. My uncle, Buck Rose, was the City Clerk in Shelby for a time and as a young boy I would often watch Scott Morrison preside over City Court in a fair, cordial and, as I said, ‘gentle’ manner–he never got riled or pretentious. He was trusted and very smart, but could talk to any citizen in just the same way, from the poorest to the wealthiest. And, I can also add that Scott was equally fair–as the law allowed then, of course–to the many African-American citizens of Shelby.”

According to several who remember Mayor Morrison, he was instrumental in creating jobs and opportunity for the town’s citizens and he was a part of the team that lured Griffin Lamp Company, Shelby Die Casting and several other businesses to the small town that employed many Shelbians for several decades.

When asked to relate any anecdotes about Mayor Morrison, Rose chuckles and said, “Well, you know, the Mayor would often come into my daddy’s drug store when I just a boy, nod at everybody, and walk up and quietly say something into daddy’s ear and they’d laugh. That just sticks in my mind, for some reason.”

Later in life, Rose had become a writer at Greenville’s Delta Democrat Times during the mid to late Sixties when Civil Rights protests were becoming commonplace in Mississippi.

“It just so happened that once such protest took place in Shelby,” said Rose. “It was actually a fairly big event for the town at the time. Well, the protesters objected to the citations that had been given to them when they were charged. I went to Shelby City Hall to cover what was happening and Mayor Morrison was there. He told me, ‘Stick around and you’ll have yourself a story.’  Sure enough, Scott took the protesters and their lawyers in a room, a deal was made, charges were dropped and everybody ended up reasonably calm and satisfied. That’s how he did things. I also well remember when I went to get my driver’s license, I walked over to the Shelby City Hall very nervously and the highway patrolman who was to administer my test was there, as was the Mayor. The patrolman looked over at him and asked, ‘Scott, do you know this boy?’ and the Mayor answered, “You don’t have to worry about him–I’ve seen him drive. Just give him his license.’ I stood there in shock!” Rose laughs, although adding that he did have to drive around the block and park to the satisfaction of the highway patrolman.

Dr. Lee Owen, a retired pediatrician who grew up in Shelby at the time of Mayor Morrison’s tenure, laughingly recalls a certain characteristic of the mayor.

“My family had a large plantation in Shelby,” he said, “and I went to school with the Mayor’s daughter—but, I really remember that he drove a coupe car and would zoom by us on the gravel road very often!”

Jack Gazelle, who also grew up in Shelby, recalls Mayor Morrison as a man “always dressed to the nines. A very dignified man who, as was said at the time, cut a dashing figure.”

A memory that sticks out in Gazelle’s mind was a special parade held in Shelby to honor Captain Bart Delashmet, a Korean War vet, who had been a POW.

“Mr. Delashmet had married a young lady from Shelby whose parents owned a dry cleaning store,” said Gazelle who now lives in Texas. “He served in Korea, had been captured and held prisoner by the Chinese in a camp from 1950 to 1953 and had received the Bronze Star and Purple Heart for his bravery and sacrifice. When he returned home, Mayor Morrison declared a ‘Bart Delashmet Day’ and there was this big parade, a large band, a big program at the school where the kids’ chorus sang and Mr. Delashmet was given the key to the city. It was a big to-do. I was probably in about the fifth grade at the time.”

Mickey Thompson, a current resident of Cleveland who was elected Mayor of Shelby directly after Mayor Morrison has many fond memories of his predecessor and friend.

“When I graduated college, I moved to Shelby in 1955 and went to work at a lumber/hardware business where Mayor Morrison was a partner,” recalls Thompson.  “That’s how I first came to know him. He was a great fellow and you never had to wonder what he was thinking–he’d tell you!  But, oddly enough, when I took over his office after he left not once did he offer any advice, any criticism–no comments at all. He never came back to City Hall to try and give his take on anything that was taking place.”

Thompson eventually became a business partner with Mayor Morrison in the very lumber/hardware store where he had first gone to work as a young man.

“My wife and I actually lived right next door to the Mayor at the time,” said Thompson, “and we often solved all the problems of the world over a few drinks late in the day! We became a close-knit social group, a lot like family, actually.”

Thompson recalls taking trips with Mayor Morrison and his wife, Ruth, hunting and fishing together and always enjoying each other’s company and that of each other’s families. “I look back at those times with great fondness,” said Thompson.

“Scott had a brother-in-law in Shelby, J.W. Thomas,” said Thompson, “and he, too, would often come over to the house late in the afternoon during our conversations when the day was done. Well, inevitably, those two would get in an argument about something political or some such and J.W. would storm off and go home!” Thompson laughs, adding the disagreements, however heated that might have been, never lased long.

Mayor Scott Morrison certainly represented a drastically different time in Delta history; but he is rightfully remembered today as a man of high principles blended with a love and vision for his hometown of Shelby. The likes of him may never be seen again.