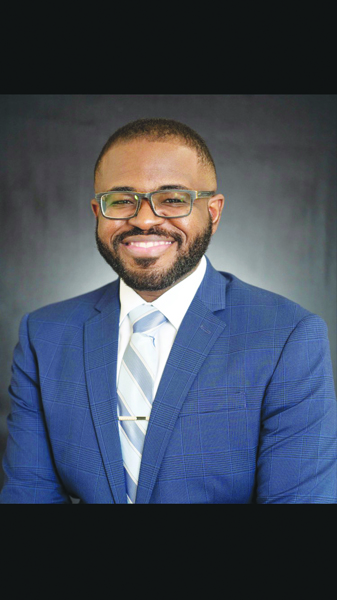 Elliott Winford, born in Memphis but raised in Ruleville, is a shining example of that town’s effective mentoring program started by Andrea Moore (recently featured in The Bolivar Bullet). Dr. Moore had noted that many of the young men and women who came through the mentoring program went on to outstanding careers and even returned to Ruleville as mentors from time to time. Winford is one such young man.

“My family and I moved to Ruleville when I was nine years old and I got involved in the mentoring group immediately. We attended the church where Andrea’s father was pastor, so I was already there and drawn to join. I stayed with the program for several years and am so appreciative of what I learned and received from the mentors. It was one of those cases where I didn’t actually know I needed mentoring but, once I started attending Tuesday night meetings, I stayed on through middle school,” said Winford.

“I was not an at-risk youth, but I was in the band and a little more studious–probably somewhat of an outsider and nerdy. But, to be able to interact with kids my age who may have been outsiders was an invaluable experience for all of us. I have so many fond memories, especially of the trips we used to take all across the country during the summer to museums and historic sites, and even getting to meet a former NFL player who came to speak to us on one occasion. We got to learn that the world was a lot bigger than what we were able to see on a daily basis,” said Winford.

Winford left Ruleville to attend high school at the School for Math and Science in Columbus, MS. where he graduated. He recalls that as many as 15 % of his classmates at the prestigious school were also from the Delta.

“The School for Math and Science has always done an admirable job reaching out to and recruiting Delta students,” said Winford.

He went on to earn a B.S. in Chemistry from Mississippi College and a Master of Health Sciences degree from Meharry School of Medicine in Nashville, a school founded in 1876 by African-American leaders.

Winford is currently in his last year of medical school at Meharry. “My specialty of choice is Internal Medicine, which will involve a three-year residency, and after that I’m looking at probably specializing in cardiology. I still have quite a bit of training yet to do. I lost my father at a relatively young age right after my family moved to Ruleville and my mother was a nurse. So not only was I exposed to medicine at an early age, my father’s death also impressed upon me that more work and research was needed in the medical field. When I was 19, I lost my mother to cancer, and that only cemented my career choice. She was diagnosed in March, 2013 while enrolled in a Nurse Practitioner’s program but still graduated in May. Unfortunately, she passed before she ever got an opportunity to practice so, in a way, I feel as if she is working through me now–and will be with me in my future practice,” said Winford.

Just a few weeks ago, Winford presented a Zoom program to his former Ruleville mentoring group after being approached to do so by Dr. Moore. “I was so excited to give back and talk to the children and show them they can do whatever they want in life. I hope I motivated them and acted as an example for them to pursue their dreams and career goals. Delta children sometimes don’t hear that very often and I was pleased to deliver a message of inspiration as well as discuss the challenges I faced. It’s important for them to know that it’s not easy to succeed in life, especially as a minority, but that it is indeed possible with hard work. I hope to adopt a few of the kids as mentees and stay in touch with them, as well,” said Winford.