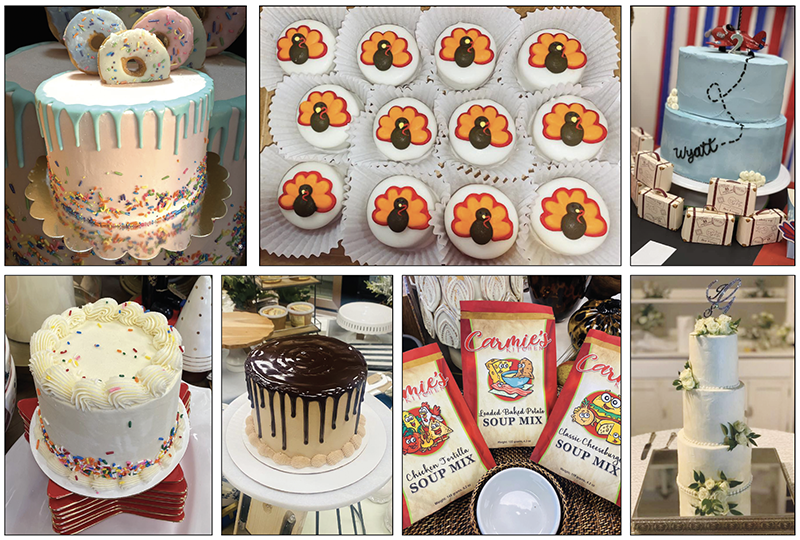 Mother and daughter cooking up success

The mother and daughter team of Memrie Melton and Annie Pearson, respectively, have co-owned and operated Sweet Annie’s Cupboard, LLC in Cleveland for just a little over a year and a half. During that short time, however, they’ve made a name for themselves and their business, turning it into a “sweet” success.

The ladies specialize in cakes, especially those for special occasions, as well as cookies, casseroles, pies, cheesecakes, olive loaves, cinnamon rolls — “just about anything that we’re asked to make or cook, we can provide for our customers,” said Pearson, adding that cooking is a long family tradition.

“Our sourdough bread is probably what’s become known as their specialty,” said Melton.

“It’s a special recipe that came from a lady, “Mama” Jane Gowan, who baked in the Batesville area for many years,” said Melton. “She passed the recipe on to me and taught me how to cook her bread the way she did it. Mama Jane would just give her bread away to people–that was what she called her ‘blessing in life,’” said Melton. “She passed away last year and we named our bread after her.”

“We keep some inventory in the store for walk-ins but we’re primarily a ‘made-to-order’ business,” said Pearson. “Orders have been coming in so fast for us lately and we’re always working to keep items in stock. We’re not a restaurant with indoor tables–Sweet Annie’s Cupboard will prepare to order for people to come in and get what they requested or we’ll deliver it to them. We’ll also do some catering as the need arises,” said Pearson.

As to the decision to open their business in the first place,  the 28 year-old Pearson said she had actually been preparing customized cakes for friends as far back as her high school days. “So, actually, my mother and I both have been cooking for people on the side out of our homes for a number of years–and I also had another job,” she said. “I was working in Jackson, however, and the trip back and forth to Cleveland–which is home and where my mother and I are both originally from–got so exhausting that I made the decision to go out on our own full-time with our bakery. And that’s when Sweet Annie’s Cupboard was born,” said Pearson.

“I supported Annie wholeheartedly,” said Melton, who had been both a teacher and a nurse, “and chose to go into the business with her. And even though we started during the pandemic, we really are doing well and Cleveland has supported us wholeheartedly. That said, we’re still learning the business aspects as we go along,” laughed Melton. “Our expertise is in what we cook, not as accountants or business owners! Still, it’s a fun adventure and our customers have been wonderful. These days, supply prices for us are so high due to inflation and supply issues,” she continued. “But, we try to keep our own prices affordable for people. It’s a challenge, though, and we know we’re not alone in facing it.”

The ladies said that they’ve been told that their cakes are “like no others,” said Pearson. “Customers tell us our cake recipes are special and unique. We always aim to prepare from scratch and fresh and it makes a real difference. Of course, that’s been instilled in us coming from a family of a long line of cooks who also like to eat, and eat good.” Melton said her mother-in-law was born and raised in Germany, and that she learned a lot of different ways to get around in the kitchen from her. “She was an amazing cook who, at one time, owned her own restaurant in Kentucky.”

Mother and daughter will keep doing what they love in their new venture and they said that, in turn, “our customers will hopefully love it, too.” “It’s been a pleasure so far to make people happy, make good food and products just the way they want them and grow our business all at the same time,” said Pearson.