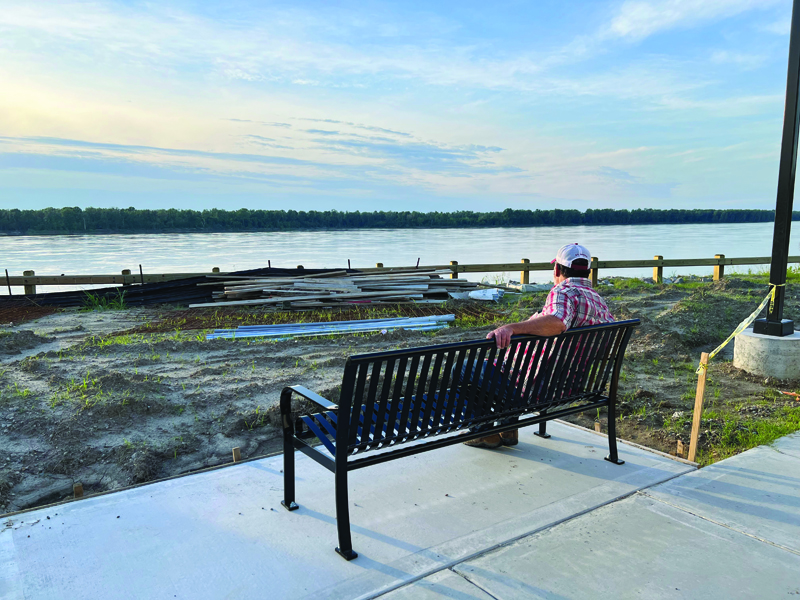 The next phase of construction is underway at the Terrene Landing River Park in western Bolivar County just north of Rosedale. After a major facelift last year, restrooms and a pavilion are now being built at the park along the banks of the Mississippi River.

Phase two of the project has also seen the addition of sidewalks, lighting, benches and a timber railing.

“We are trying to wrap up construction of the restroom and the pavilion, hopefully by late summer or early fall,” said Josh McPherson of Eley McPherson Engineering, the firm overseeing the project. “A metal building will be used as part of the pavilion and we have had some delays in getting that material.”

McPherson said the pavilion will be completely open, with a railing around it, and will be well lit. The pavilion site has also been elevated about four or five feet for better viewing of the river.

Sidewalks have been laid from the restroom and pavilion area to the boat ramp. Metal benches facing the river have also been installed. Light poles are in place around the landing but are not yet operational. A timber rail runs the length of the dock on the river side of the landing.

This is the second phase for the $2.2 million dollar project. The first was the earthwork which included paving the landing and widening and raising the boat dock.

The next phase of the project will be to provide water at the river park. The Bolivar County Board of Supervisors, who oversee the park, voted to put in a well at the site. The cost will be approximately $500,000. The county recently awarded the water well project to Mid-South Water of Cleveland. McPherson said he hopes to begin work on this phase of the construction by late summer.

He said the well will be used to refill the water storage tanks of the riverboats, such as the American Queen, that dock at Terrene Landing.

“The well is designed to supply 50,000 gallons of water per stop to the steamboats,” McPherson added. “The water will meet all of the health department guidelines since this will be used as drinking water on the boats.”

He added the contract includes not only the well but a chlorinator and tanks.

Along with the American Queen, her sister vessels, the American Duchess and the American Countess dock at Terrene Landing. Passengers are shuttled to Cleveland to tour various attractions and museums.

McPherson said he is very pleased with the progress of the project. The final phase he said will be to apply for grants to continue to do improvement that will include a walking trail, nature trail and a fishing pier on the lake at the property.

The project is a joint effort by the Bolivar County Board of Supervisors, Mississippi Department of Wildlife, Fisheries and Parks and Transportation Commission Willie Simmons, who, while serving in the state senate, was able to obtain funding to get the project off the ground.

“This is long overdue, having something like this on the west side of the county,” said McPherson. “This project was truly a collaborative effort. And it’s good for tourism.”

While the old landing was open to anyone, McPherson said the new park makes the river more easily accessible to everyone. Terrene Landing has always been a popular spot for watching the river and launching a boat. Terrene Landing has long been an attraction for fishermen, hunters, sightseers, paddlers and riverboats.