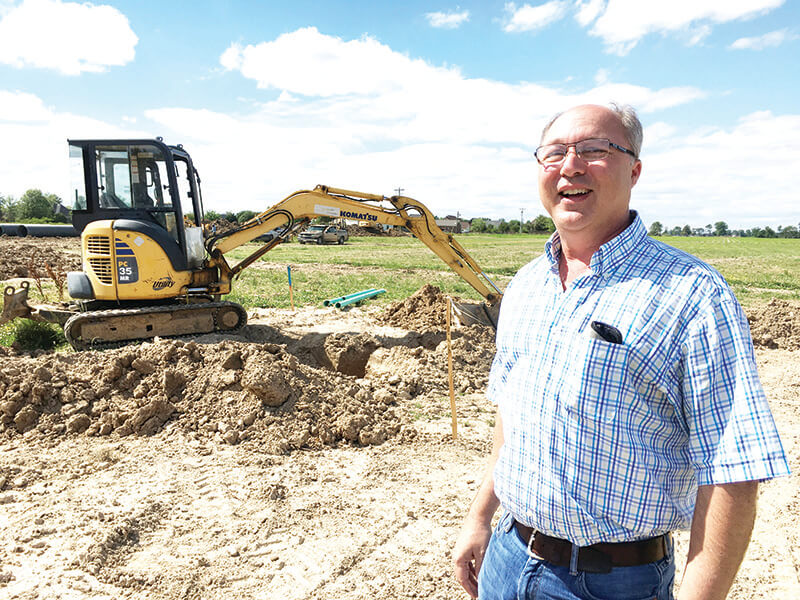 Chris Collins, President of Roy Collins Construction Company in Cleveland, is “building” upon the company’s already outstanding reputation with a second subdivision project that broke ground in October of last year. The construction company is the general contractor for the utility work and streets on the project while a separate second company, Chatmoss, LLC, owns the actual lots. Chatmoss is also the name of the subdivision.

“Back in 2007, we put in a gated subdivision here in Cleveland,” said Collins, “in the northwest part of town on Ronaldman Road. We got involved in development because people had approached us about a safe area and good environment for their children to be able to play in–they didn’t want to worry about high traffic so we decided on a gated community. We initially put in 17 lots and they all sold quickly.”

Collins said his company owned additional land just north of Phase I and a decision was made to construct another 18 lots for the Phase II development. “It will be a gated community as well,” he said, “with a restricted neighborhood covenant. The lots are half-acre in size and everything is built to city specifications such as concrete streets, underground utilities and no open ditches. After we broke ground the heavy rains started in November and that set us back. But, we recently got back to work putting in storm drainage and are just about finished. We anticipate opening in August or September and we’ve already sold two of the 18 lots.”

Collins says Phase II of the development arose from high demand. “And we anticipate all 18 available lots to sell out within two to three years,” he predicts. “We’re getting interest from people all over the Delta who are eager to move to Cleveland, including farmers and young entrepreneurs, as well as from families already living here who want to move up from their former starter homes to something bigger—their forever homes. We’ve also gotten a number of retirees looking at moving back here.”

Collins said that over the past 20 years there has been little new housing development in Cleveland and that is why Roy Collins Construction Company took the lead in changing that situation—for the better.

The street names of the new Chatmoss subdivision have an interesting story behind them, Collins says.

“The first street name is Annsley Cove, the second is Hunter Cove and the third phase we have planned will be Tabb Cove—well, my niece’s full name is Annsley Hunter Tabb,” Collins reveals, laughing that he, his father, and Annsley herself would be the only ones who knew the story. “Until now,” he laughs.

As for why “Chatmoss” was chosen as the name for the subdivision?

“My room mate in college was from Martinsville, Virginia,” said Collins, “and their country club, which I heard about from him for years, was called Chatmoss. I just thought that was an interesting name and it had always stuck with me.”