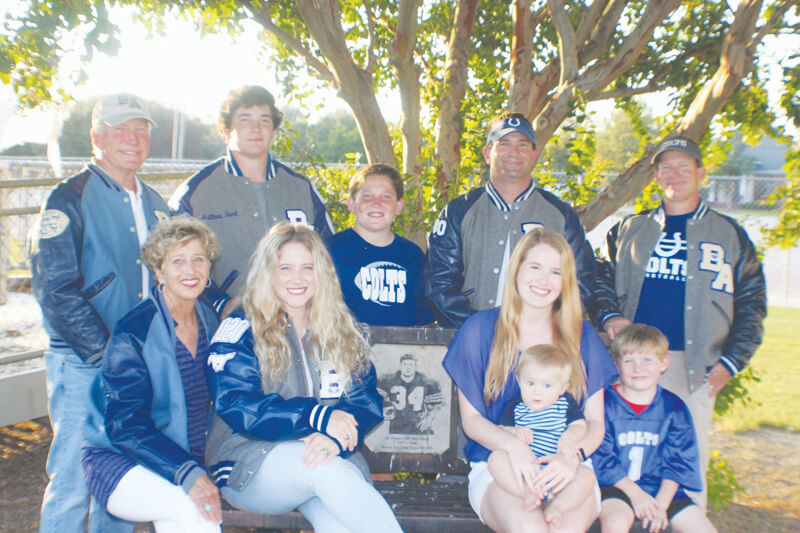 Establishing a 50-year heritage at Bayou.

When anyone looks at the history of the Bayou Academy and the school’s athletic programs, the name Short can be found very prominently.

For over 50 years, the Shorts have made their mark sporting the blue and white of the Colts. The foundation was laid by Dennis and Sammye Ann Short. Dennis was a member of the school’s 1969 Academy Athletic Conference State Championship football team and was  a member of the school’s first graduating class in 1970. He ended up playing football at Mississippi Delta Community College.

Sammye Ann, whose maiden name is Montesi, played basketball, track and field, tennis and cheer. She graduated from the school in 1972. The two alums have been married for 46 years and ended up having three sons Ryan, Matt and Dan.

When it came to raising their sons, Dennis and Sammye Ann were on the same page.

All three sons were solid in the classroom as well as on the field. As much as the family loved sports, the grades were top priority.

“We wanted academics to come first,” said Sammye Ann. “We knew they had good minds and they could study, so we put a lot of emphasis on studying and making good grades. Then, when they got interested in playing sports, we set a standard where they had to have 90 and above in every subject so they could continue playing those sports. We felt like the academics were first and sports were second, but they succeeded with that. We’re very proud that they could do both.”

One thing Dennis always wanted his sons to do was go out and do the very best they could and show a lot of class in the process.

“The biggest thing is if you’re not going to play with heart, don’t go out there,” said Dennis. “Don’t give me a half-hearted effort. If you can’t give me 100-percent don’t give me anything. If you don’t want to play 100-percent, don’t go. The other thing is sportsmanship. To this day, I know it’s a big thing now, but I can’t stand trash talking. I just tried to instill character. Sports taught me a lot about life, character and personality.”

Every athlete needs to have a competitive edge and having a good competitive nature has helped people succeed in ever aspect of life. The spirit of competition has always been big in the Short household, and it was burned in Ryan, Matt and Dan.

“Everything in our house growing up turned into a competition,” said Ryan, a 1993 graduate of Bayou. “Anything we started off playing would always end up with somebody mad, fighting, crying, screaming, whatever. There’s no telling how many times mom and daddy would tell us to break it up, y’all stop doing that, stop picking on so-and-so or stop whatever. It didn’t matter if it was shooting basketball in the driveway or you name it. Everything always turned into a competition.”

Dan remembered his parents using that competitive edge between him and his brothers in a constructive way.

“That’s how momma and daddy got us to eat our vegetables,” said Dan, a 1997 graduate. “They would ask us how many peas or butter beans there were and it was a competition to see who even got that right. We had to eat them to count them, but everything came back to a competition.”

On top of their competitive nature, Ryan Matt and Dan shared one room in their house in Choctaw.

“We started out probably in a 9 x 12 with bunk beds and a trundle bed with all three of us in that same room,” said Dan. “I guess I was maybe a fifth grader when they boxed in the carport, and then we all moved into that room. We were still in the same room together, but it was just a bigger room. We were together always. Growing up we had one car and wherever that one car went, we all had to go.”

Their natural desire to be competitive was topped by their love for one another as they had a strong bond.

“We were always playing outside together and playing sports together,” said Ryan. “In a lot of ways, we were each others’ best friends. We always shared a room together most of our life until you moved out and went to college. It wasn’t like you were fixing to go to your room and get away from your brother. Your brother was in your room with you because you all shared a room, shared a bathroom and everybody was in it together.”

The Short brothers supported each other in everything they did.

Ryan felt some of his favorite times were watching his brothers succeed.

“I was just as excited to see Matt make three interceptions in one half of a football game,” said Ryan. “That was awesome to see your brother’s accomplishment. One of my favorite football games that I was a spectator of was Dan’s North Half game. His team played Riverfield. Riverfield was supposed to beat the you know what out of Bayou, and Dan’s team played lights out. They played awesome. That was one of the most exciting games to just spectate and see and I wasn’t even on the field. I was excited for them and how hard  they played. We were always pulling for each other when the other person was playing.”

When Ryan and Matt were playing high school football, Dan was a manager on the team. He learned a lot and embraced the school’s winning tradition. When Dan got his chance to play, everything he learned paid off. In his senior year, the team overcame an 0-4 start to advance to the 1996 AA State Championship game where they lost to Canton.

“We took it upon ourselves to try and learn and be as prepared as we could, because we didn’t want to end our senior season being losers,” said Dan. “It worked out good, because we were in the state championship game. It is kind of ironic now, because Flip Godfrey, who is the head coach at Bayou now, was the coach on the team that beat us.”

Dan said it was a challenge to follow in the big shoes left by Ryan and Matt.

“It’s kind of hard being that little brother of the two that were great players trying to carve out your own name and own legacy,” said Dan. “I started every year. In 10th, 11th and 12 grade, I was a starter. I played basketball, baseball and ran track. They were mostly to keep me in shape for football.”

Ryan and Dan, over the years, have continued to invest their heart and soul into Bayou. The two coach the school’s Pee Wee football team together. Dan has three children. The oldest Avery is a junior that will be going to the Mississippi Math and Science School in Columbus after attending Bayou. Avery played on the Lady Colts’ basketball team last year. Dan also has two sons, Noah, who will be in 4-year-old kindergarten at Bayou and Luke who is 8-months old.

“The Shorts at Bayou have always competed in state championships in football, and I participated in track and softball,” said Emma. “I think it’s awesome being able to add to that legacy. It’s just an honor to be a part of this family and just representing the best way possible that I can. There’s so many Shorts at Bayou that you just know its where we’re supposed to be. Bayou is our second home. Sports is more than just a game for us, so we learn a lot through sports. It’s fun.”

The family philosophy of giving it your all is something Emma has proudly embraced.

Ryan has enjoyed watching his kids compete but each moment for him is a nailbiter.

“As a parent, it’s more rewarding and more nerve racking to watch your kids play than it is to play yourself,” said Ryan.”I was never nervous during a game or before a game. Watching them play, I get more nervous watching them play than I ever did for myself. It’s very, very exciting to watch them compete in sports. Me and Heather both enjoyed that over the years and have more years to come.”

When Matt went to school at Bayou, he especially took pride in academics as he graduated Salutatorian in 1995.  In 1996, Matt’s life was tragically taken as he died in an automobile accident. What Matt meant to Bayou hasn’t been forgotten as the Matt Short Award is given annually to a student-athlete that excels on the field and in the classroom.

“Matt really set the standard himself,” said Sammye Ann. “One day Matt actually did come home from an athletic banquet, and he made the remark that there was no scholar athlete award and how hard it was to make good grades and play sports. We remembered Matt saying that and we thought it was time to start honoring those that could play sports and make that 90 and above in every subject.”

In 1997, Dan was the male recipient of the honor when it was first given. This year, Emma was the female recipient making her the second Short to get the award. The ceremony was done in a different format as it had to be presented virtually due to the COVID-19 pandemic. Dennis, Sammye Ann and Dan presented Emma’s plaque.

Emma receiving the award brought all kinds of emotions to Ryan.

“It was pretty surreal,” said an emotional Ryan. “It just puts things into perspective for you. To be honest, a lot of times I can’t talk about it without getting emotional. Matt and I were such good friends and Dan as well and for having that to go for circle and to have one generation give that award to another generation is very special. Rarely ever nowadays do families stay in one place long enough for you to have generations to be in one spot. It’s special for our family, but it’s also special for the whole school. As a parent, it makes you very proud. As a brother, it makes you very sad and makes you remember that there’s somebody that’s still not there that you wish were there.”

Even though she couldn’t be there in person with her grandparents and uncle to receive the award, Emma felt the honor was a crowning achievement for herself.

“I’ve been at Bayou my whole life,” said Emma. “I’ve always, ever since I was in junior high,gone to the academic and athletic banquets. When ever I hit I guess 10th grade or ninth grade, I knew grades really needed to start mattering for me, because I wanted to get that award. That was the one thing I wanted to get. It was really emotional that all this that happened with COVID, because I heard that I would get it. I wanted to be there with my grandparents while I got my award, but things didn’t happen like that.

“We had some sort of family thing at my house, and it was on the live stream. It was really emotional to hear them talk about me in such a great way. It’s such an honor that my teachers and coaches felt that I should get that award and they voted for me. That was definitely one of my favorite memories of my senior year getting that award. It wasn’t in the setting and environment I wanted it to be in but it was such an honor to receive that. I think no one should take that award lightly, because it’s such an honor. My uncle Matt left a legacy at Bayou that should not be forgotten. I hope they continue to share his story and give that award for many years to come. I hope one day that my brothers will get it just like I did. I hope they continue to stay strong in the classroom and on the field.”