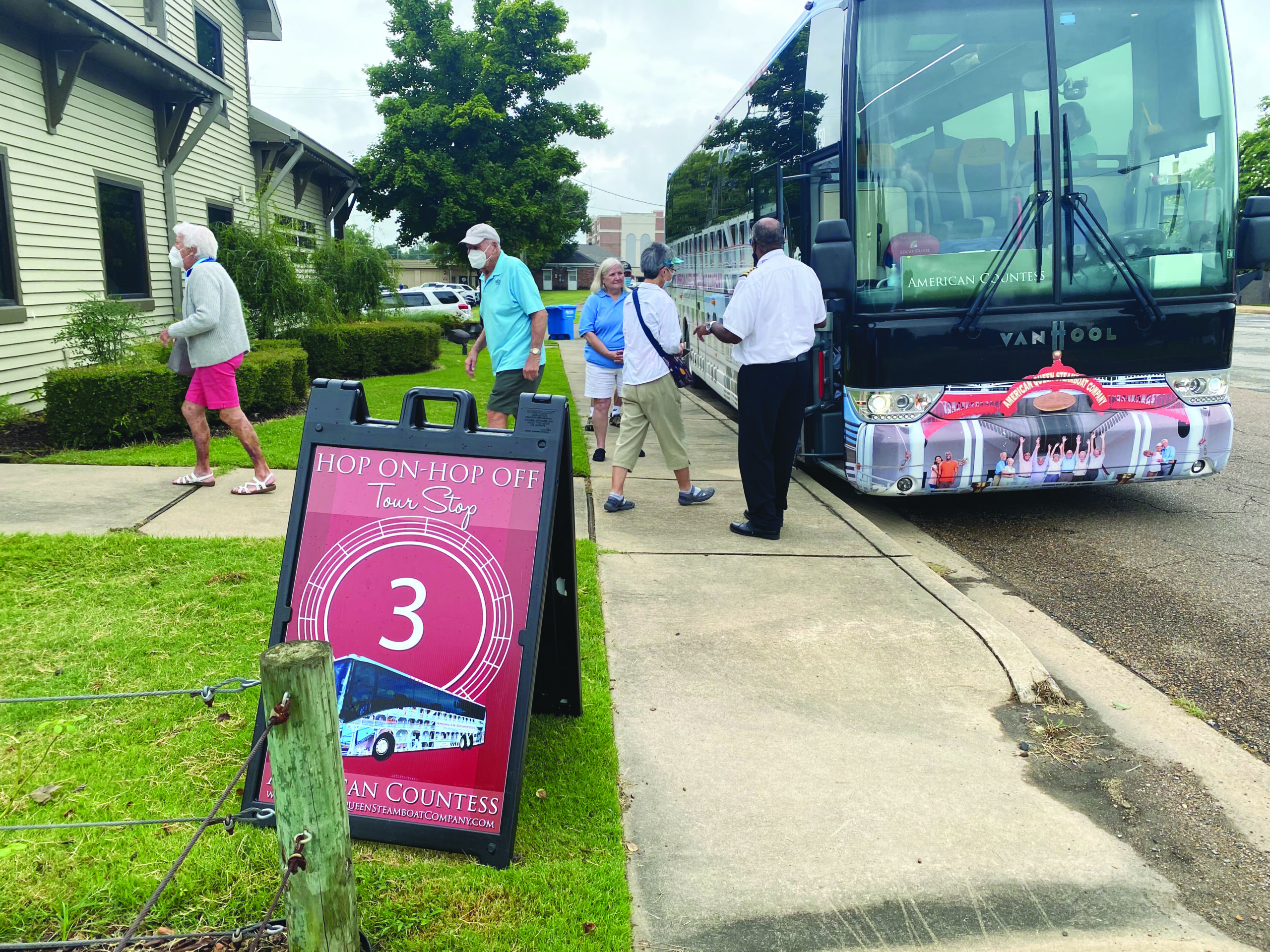 Passengers were shuttled from Terrene Landing to Cleveland

Passengers from the steamboats docking at Terrene Landing are finally enjoying touring museums and attractions around Cleveland.

Guests aboard the American Countess, part of the American Queen Steamboat Company, took part in the first ever Hop On Hop Off tour of Cleveland this past Monday (July 2). The almost 200 guests not only visited Grammy Museum Mississippi, but the Martin and Sue King Railroad Museum, the Mississippi Delta Chinese Heritage Museum and downtown shopping.

The Cleveland-Bolivar County Chamber of Commerce has been working closely with AQSC to help give the passengers the best possible experience.

“On behalf of the chamber, we are excited to have the passengers stopping downtown,” said Cade Holder, director of community programs with the chamber. “The merchants are also excited and are looking forward to selling not only what is in their shops, but selling Mississippi as well.”

Various businesses in downtown Cleveland placed special signs in their windows welcoming passengers of the American Countess to the city.

Grammy Museum Mississippi has been the only local attraction visited by the passengers until now. Guests aboard the boats now have the option of exploring other museums and attractions in Cleveland.

The tour begins at the Grammy Museum and proceeds to Cotton Row where passengers may disembark to enjoy shopping downtown. Then, it is on to the railroad museum, the Chinese Heritage Museum and finally back to the Grammy. The buses stop at each location every fifteen minutes to allow guests to hop on or hop off. While the buses may stop frequently at each attraction, the passengers may take as much time as needed to fully enjoy each museum, as long as they are back on the boat for all aboard, 30 to 45 minutes prior to the boat leaving the dock.

At present, two buses are shuttling passengers between Terrene Landing in Rosedale, where the boat’s dock and the Grammy Museum. Two more buses take the passengers around the city on the Hop On Hop Off tour. Local, trained tour guides are assigned to each bus giving the guests history and fun facts about the area.

The Hop On Hop Off tour is offered to each passenger as part of their ticket for the river cruise.

The steamboat voyages currently docking at Terrene Landing are all southbound. The boats begin their sailings in Memphis and end in New Orleans. Terrene Landing is the first stop on the cruise after leaving Memphis. Additional stops on the nine-day excursion include Vicksburg, Natchez, St. Francisville, LA, Baton Rouge, Nottoway Plantation and New Orleans.

The Hop On Hop Off tours are a popular way to explore the ports visited by the AQSC boats. The American Duchess will dock at Terrene Landing on August 12 and the company’s largest boat, the American Queen, makes it first visit to Bolivar County on August 31.