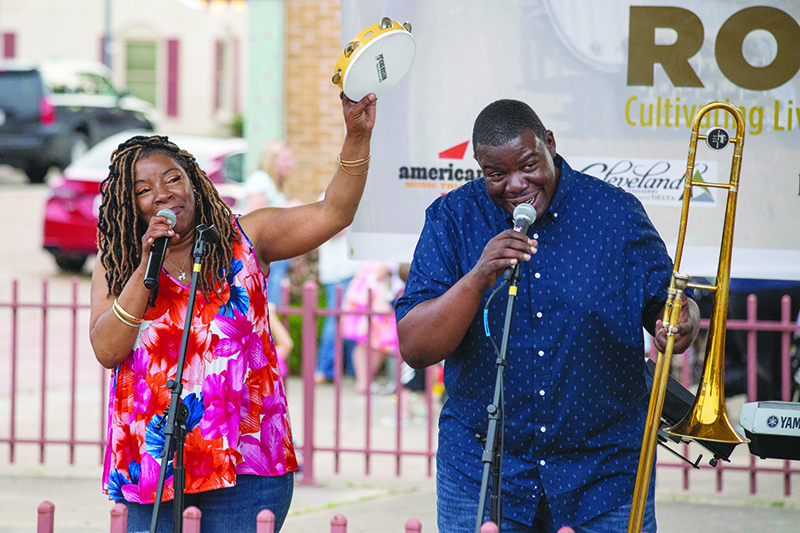 Brother/sister music duo can do it all

Eric Edwards and Shara White make up the brother/sister duo of Variety, and the two Cleveland natives have traveled the country performing just about any song you could care to name–even a few of their own originals.

“I’m a keyboardist,” said Edwards. “But, I program a lot of music on my keyboard so it sounds like a full band. But I also play trombone and do a lot of singing, too. Shara sings lead and harmonizes with me–she’s a pianist, but she just performs vocals in Variety.”

Edwards said while Variety plays the songs of other artists, he likes to put his own “spin” on whatever the duo is playing.

“I like to try and make it my own as a vocalist and musician,” he said. “And, while we have written a lot of original songs–and recorded quite a few–we tend to tailor our setlist to our audience. If it’s a country audience, we can do Merle Haggard or George Jones; if it’s a Black audience, we can play Motown, R&B, gospel; even if it’s an older audience, we can do the standards, anything from Sinatra to Glenn Miller. I played first trombone in the Delta State jazz band way back when–I’m 48 years old–so the standard, classic Big Band songs are second nature to me.”

In fact, Edwards will soon receive his Bachelors of Music degree from DSU and plans to pursue his Master’s, as well.

Variety has close to 400 songs in their repertoire, said Edwards.

“That’s why we call ourselves Variety–we were blessed to be able to cover so many different musical genres. We started out as gospel musicians from the church, but love and can perform all kinds of material. And people love us,” laughed Edwards. “We always get invited back, I promise you!”

Shara and Edwards grew up singing together, but they have been performing professionally as a duo for almost 15 years and are hired to play all over the country.

“We enjoy getting out to tour and, in the past, have opened for several gospel artists, including Shirley Caesar in Tennessee many years ago,” said Edwards.

Edwards has also played with other musicians, including Bobby Rush, Little Milton and in B.B. King’s Blues Band (after King passed away and his group kept touring) and several other blues and gospel artists.

Tricia Walker said of Variety, “Eric and Shara are two of the best musicians I’ve ever heard. They literally can do it all and when they’re on stage together, it literally sounds like a full band. I can’t say enough good things about them.”

Variety has a Facebook page, said Edwards, and if people are interested in hiring Variety they can call him at 662-402-4310.