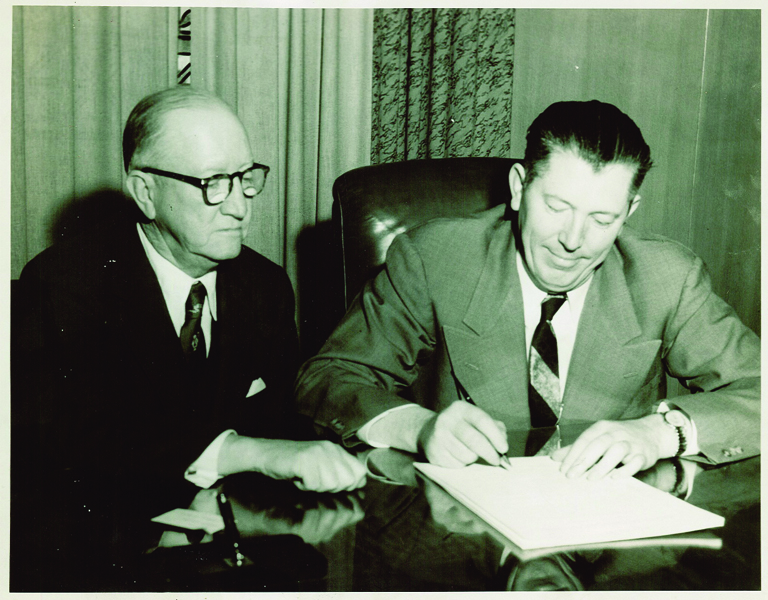 Walter Sillers was a giant among the prominent men of Mississippi in the 1900s. Close to home, his name is known to many because of the Walter Sillers Coliseum at Delta State University. However, relatively few Mississippians alive today know much about him.

The Sillers family originated in Perthshire, Scotland, and together with many other Scottish families, they settled along the Lumber River of North Carolina prior to the Revolutionary War.  They migrated to Jefferson County, Mississippi, before Mississippi became a state and they became sizeable planters in that county.  As lands became available in the Delta through treaties with the Indian tribes, many planters sold their lands along the southern parts of the Mississippi River and moved north into the wild, untamed Delta that offered so much promise, primarily along the rivers at first.

As Hodding Carter wrote in Lower Mississippi, “The Lower Mississippi’s valley is a precarious Eden, which the river has fashioned and caused to be populated because of its promise.  It is a promise beset by ordeal and still only partly fulfilled.”

When Carter wrote that in 1942, the Delta’s promise was far more fulfilled than it was when Walter Sillers’s grandfather, Joseph Sillers, sold his lands in Jefferson County in 1854 and moved to land just south of Beulah next to his brother-in-law, Charles Clark, who became a Confederate general and was elected governor of Mississippi in 1863.

Bolivar County in the 1850s was mostly swamp, cane, disease and forests with settlements almost exclusively along the Mississippi River. There, Joseph Sillers established his main plantation, Woodlawn, firmly placing the Sillers family in Bolivar County. Joseph expanded his land holdings, but the Civil War prevented him from achieving what he might have otherwise. He was an officer in the Confederate Army and was captured and died as a prisoner of war in Vicksburg in 1865.

Walter Sillers’s early education was in the public schools in Rosedale and then Sewanee Military Academy in Tennessee.  After graduating, he entered Ole Miss as a pitcher for the varsity baseball team and after a few years at the University, Walter returned to Rosedale and started reading law under the tutelage of several senior attorneys, including his father. In 1909, at age twenty-one, he was admitted to the bar and joined his father’s law firm where he would remain for the rest of his life. Walter also worked with his father managing the family’s significant landholdings.

In 1915, the voters of Bolivar County elected him to serve in the state House of Representatives. He became a member in early 1916 and served for the next 50 years, the longest service of any legislator in state history.

Sillers quickly established himself as a serious legislator. For decades, he achieved significant progress while in the Legislature and some of these milestones include the creation of what became Delta State University and Mississippi Valley State University as well as the establishment of what would become the University of Mississippi Medical School. There are many other pieces of legislation in which Sillers was instrumental, but one with lasting importance was the law enacting the state sales tax.

Like the rest of the country in 1932, Mississippi was in the throes of the Depression. For several years, the State had resorted to borrowing large sums to pay its daily operating expenses and the budget had also significantly increased under the second administration of Governor Theodore G. Bilbo (1928-1932) to provide support to the poor people in the state suffering the most. When Governor Martin Conner succeeded Bilbo in January of 1932, the state government was on the brink of financial collapse. Expenses were far exceeding revenues, and the state was running out of capacity to borrow more money. Governor Conner became convinced that, in addition to significant budget cuts, the establishment of a broad-based retail sales tax of two or three percent would be the best and only certain way to prevent a catastrophe. The leader in the effort to pass this tax in the House of Representatives was Walter Sillers. Although fiercely opposed by most of the retail merchants, the sales tax passed the House of Representatives by one vote. This tax has provided the primary foundation for the financial support of the state since that time.

Although Walter and Lena were never blessed with children, he was a very strong family man. As part of a large family—he had four sisters, four nieces and nephews and many more great nieces and nephews and cousins—Walter was not only called upon to be a male role model, but also a leader and defender of his family. Judge John Pearson of Rosedale remembers Sillers as an uncle who taught him to hunt, took him to Ole Miss football games, and mentored him in so many other ways.

Over time, Sillers became more esteemed and in 1944, after having served 28 years in the House, he was elected Speaker. He served as Speaker for the rest of his life, a span of 22 years, becoming the longest serving Speaker in the history of Mississippi until his death in 1966.

Sillers was a larger than life in many ways and his importance to his hometown of Rosedale was such that schools were closed on the day of his funeral in 1966 so students could pay their respects. More than a 1,000 people came to honor a committed leader who fought for the issues the way  he saw them.

Mississippi has seen none other like him on the state level. The tallest building in Mississippi is named for him and a huge portrait of Sillers hangs in the lobby with his wife, Lena, looking down over his shoulder from the House gallery.