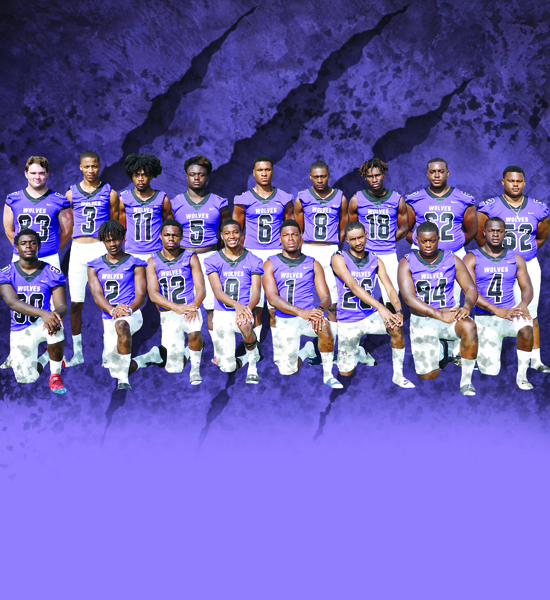 After a delay to the start of the football season due to concerns from the COVID-19 pandemic, the Cleveland Central High School Wolves will take the field for their first game of the 2020 season Friday night when they host the Clarksdale High School Wildcats at Mickey Sellers Stadium.

The Wolves have been working hard since summer during workouts. They’ve been kicking things up a notch since they started their first official practice on Aug. 17. CCHS will be looking to rebound from a 2019 campaign where the team went 2-9 and finished last in Region 2-5A with a 1-6 region record.

CCHS Head Football Coach Jay Jones, who is in his first year leading the program, said the team has done all it can to stay healthy while having a good work ethic.

“I’m just keeping it as normal as I can,” said Jones. “All the guidelines the state has put in place, we’re following those, but we’re keeping it as normal as I can keep it just from a football standpoint so the kids get in a routine and they can learn and they can do the things we’re asking of them. The kids have been playing hard and getting after it. They’ve been focusing on their job and learning what to do. They’re listening to their coaches when they’re getting coached up so they can get better. The past two weeks have been really good, so we just have to continue to build on that.”

“In the first year, you’re trying to implement your things that you want to do and how you want to do things and how we need to practice and how we need to play,” said Jones. “That’s just going to take time, but up to this point everything that I can expect to have happened has happened. We’re heading in the right direction. I’m excited about it, the kids are excited about it and we’re just ready to be playing.”

CCHS will try to improve on a scoring offense that put up just 14.4 points per game last season. Early in his career, Jones had stops as an assistant coach on the collegiate level at Nicholls State University (2005-07) and Ole Miss (2007-10).

The offensive scheme the Wolves will run is heavily influenced from what Jones has seen and studied in the college game.

“Scheme wise, I would compare us to Auburn,” said Jones. “It’s going to be a lot like Auburn and Gus Malzahn’s scheme. A lot of the stuff I got, I got from Hugh Freeze when he was at Ole Miss, so a lot of things we do offensively come from those two people.’

Defensively, the Wolves struggled at times last year as the team gave up 29.6 points per game.

Heading into the year, the Wolves will have a little different look on defense.

“We’re going from a split four (4-4 defense) to a 3-4 defense,” said Jones. “It’s a little bit of a transition as far as like the players learning their technique on this block and this block and learning our reads. It’s just a little different than what they’ve done in the past. Day by day, they’re getting better and that’s all we can ask for.”

The Wolves have some experience as they have approximately 20 seniors on the team.

Jones is very excited about the way the seniors have conducted themselves in preparation for the year.

“This is their senior year,” said Jones. “They want it to be good, and they want to go out on a high note. A lot of them are stepping up and encouraging the rest of the team and trying to get them to practicing a little harder and move around a little faster. They’re encouraging these guys, and they know this is their last year and this is the last season they’ve got. They’re doing a lot of good things for the program. We’re just trying to get better each day and they’re just helping out a whole lot.”

Many of those seniors are among the teams’ top players. Quarterback Latravious Miller, running back Terry Winston, h-back Seth Givens, wide receiver Sirr Trotter, wide receiver Kezwick Akon and guard Aldric Rash are starters on offense, while defensive lineman Malik Rash and linebacker D’Monte Williams are two of the top performers on defense. Trotter (defensive back) and Akon (defensive back) are also valuable players on defense.

Trotter is playing football at CCHS for the first time. His athletic prowess has been displayed on the baseball field over the last three years, and he is looking forward to showing his skills on the gridiron.

“I’m pretty excited, because everybody don’t know me,” said Trotter. “They don’t think I can play, so I’ve got to show them what I can do.”

One thing Coach Jones has noticed is the way people in the community look forward to seeing the Wolves play. Jones felt starting the season at home will be a huge plus.

“When I’m out in the community, when I’m in the gas station getting gas and I have my Cleveland Central football shirt on, they’re all happy,” said Jones. “They’re like, ‘Hey Coach, we’re excited about this year’ and I am to. I’m glad our first game is here because right now we have a lot of people that are supporting those kids and this program. I’m grateful our first game is here because they’ll be able to show that support the very first game.”

Rash was very anxious to get his last season as a Wolf underway.

“This is my senior year, so I’m really ready to play football,” said Rash. “I hope we all go out in  the first game next week and do very well. I think my team is ready offensively and defensively. We’re going to go out and try to win.”

The Wolves haven’t been to the 5A State Playoffs since 2017 when the team was first formed from the merger of Cleveland High School and East Side High School.

Trotter is ready for the direction of the team to change.

“We’ve been having losing seasons the past two years, and everybody is doubting us,” said Trotter. “We’re ready to bounce back.”

Kickoff for Friday’s game is set for 7 p.m.