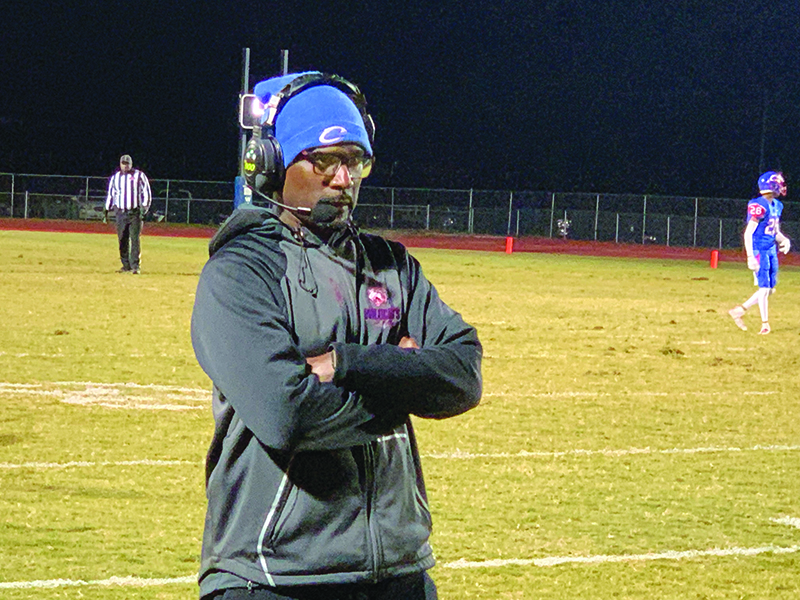 Rosedale native Henry Johnson, who has enjoyed a 26-year coaching career with the last 22 as a head football coach, has announced his retirement.

He officially announced his decision on Jan. 3, and he will retire effective on June 30.

He’s had a lot of success in his career as he has posted a career record of 205-77. In 22 seasons, he’s made the playoffs every year and has won 12 region championship with two state titles. He’s only had two losing seasons overall and never had a losing record in the regions his teams have played in. His overall record in region play is a staggering 99-19. At the time of his retirement, Johnson was fifth in the Mississippi High School Activities Association among active football coaches in career victories.

The 48-year-old felt it was the right time for him to retire.

“When you come of age and you get your years in, retirement always plays in your mind,” said Johnson. “I’ve been contemplating it probably since last year. It started with COVID-19. I started thinking about that and the other things going on. I went back and forth, and I made my final decision when we got out on Christmas break. I just enjoyed being at home so much, I just decided that I’m going to go on and retire. That’s when I made my final decision.”

Johnson played football at West Bolivar High School where he was a key member on the 1989 Eagles’ team that went to the 3A State Title game and finished 3A State Runner-Up. At that time, Johnson played under then head football coach the late Leland Young. After graduating from West Bolivar High School in 1991, he played football at Delta State University as a defensive back from 1991-95 After his playing days at DSU concluded, he started his football coaching career as a graduate assistant coach at DSU in 1996 and 97. His next coaching stint came at Madison S. Palmer High School where he was the defensive coordinator in 1998 and 99.

When his second year at Palmer concluded, Johnson got the chance of a lifetime as he was given the opportunity to be the head football coach at the high school he graduated from on the riverside.

The veteran coach was a young man at the age of 26 he got the job at West Bolivar in 2000.

“It was a dream come true,” said Johnson. “I never in a million years thought I would be the head coach at my alma mater in Rosedale at West Bolivar High School. When I got the opportunity, it was one I did not take lightly. It was just a dream come true to come home and impact your own community. There’s nothing better than that.”

Johnson coming to West Bolivar proved to be the shot in the arm the program needed. The Eagles went an impressive 142-32 in Johnson’s 13-year tenure with 10 straight region championships from 2003-12..

The Eagles captured the 2A State Championship in 2007 with a perfect 15-0 record and brought home another 2A State Title in 2011 with an overall record of 15-1.  The 2007 state title was West Bolivar’s first state championship since 1986.

“I went back to Rosedale with that in mind,” said Johnson when talking about winning the state championship. “Rosedale is a traditional football town. I played at Rosedale, and I went to school at Rosedale. My number one goal was to go back and restore that tradition. We were able to do that, and we got a lot of support from the community and administration. All of that was a team effort and that’s another reason I can be happy with my decision to retire. We did our best over there.”

Johnson not only had the honor of leading the school to two state championships, but he had the privilege of coaching his sons. Desmond Johnson was a wide receiver on the 2007 championship team, while Kylan Johnson was the quarterback on the 2011 team.

“Those are things right there you can’t put a price tag on,” said Johnson. “Those are priceless moments. I just have to cherish those memories. I really feel grateful and thankful to have had the opportunity to do those in my career. It doesn’t happen in everybody’s career.”

At West Bolivar, some of Johnson’s players ended up coming back and were coaches on his staff through the years.

“Coach Johnson is more than a coach to most of us,” said Williams, who was also the West Bolivar Head Football Coach from 2013-16, said. “He was like more of a father figure to us. I was just blessed to not only be a player under him but come up under him as a coach. The way he carried himself as a man stuck with all of us. He was a person that led with God first. He was a person that never even cursed. He had his ways of getting us to do things he wanted us to do. Coach Johnson was that person that meant so much to us. It went way beyond football with him.”

Jeremy Banks, who played quarterback at West Bolivar under Johnson in the early 2000s and was an assistant coach on Johnson’s state title teams, was filled with emotion when talking about Johnson.

“Back in 1999, I moved away to Indiana,” said Banks. “In 2000, I came home and it was when Henry first got his coaching job at West Bolivar. He had players working out during the summer, and I came back. My friend, Chris Johnson, got me to come work out with them, and Henry talked me into staying. Henry is a great coach. He is one that I can go to for anything right now. He is always there for me whenever I need him.”

Banks recalled a moment during his playing career in high school where Johnson taught him a valuable life lesson.

“I didn’t play my 11th grade year,” said Banks. “I got to arguing with one of the coaches, and Henry was a big disciplinarian. He told me he wasn’t going to let me play that year. It kind of got to me. I begged Coach to let me back on the team, and he stood by his word. Him making me sit out the entire year watching my friends play really turned me around. When I came back to play for him, it really made me grow up as a young man and start taking responsibility for my actions.”

Johnson’s success at West Bolivar High School didn’t go unnoticed. Clarksdale, a program that had won three 4A state championships, had been going through a slump at that the time the school hired Johnson as head coach. From 2008-12, the Wildcats went 23-32 with four losing seasons and just two playoff appearances (4A 2008 and 5A 2011). In Johnson’s nine-year run at Clarksdale, the Wildcats made the playoffs every year with four trips to the state playoffs on the 5A level and five trips on the 4A level. When the Wildcats won the Region 3-4A Championship in 2020, it was their first region title since 2007.The Wildcats won their second straight region championship this past year and finished with a 9-2 record.

When Johnson accepted the head coaching job at Clarksdale High School, he felt leaving West Bolivar was the right move to make at the time.

“Clarksdale was a career move for me,” said Johnson. “They put something on the table for me, and it was a great move to come here to Clarksdale. It challenged my abilities to coach at a higher level at a 5A program. We were able to come here and make the playoffs all nine years. We won a lot of games and impacted a lot of young men. We didn’t win a state championship here, but I think this program now is in good shape to make a run for a state championship.”

Along with the victories and the championships Johnson has had in his career, he has seen many of his former players go on and succeed in life. Two of the players he coached at Clarksdale are currently playing in the NFL as J.T. Gray is playing defensive back for the New Orleans Saints, and Elghton Jenkins is currently playing on the offensive line for Green Bay.

“All of those wins are great, but the main thing I want to be remembered for is the way I’ve impacted the young men I’ve had the opportunity to coach,” said Johnson. “I think I’ve impacted a lot of young men and that’s been very, very rewarding for me.”

As far as life after coaching, Johnson plans to spend quality time with his family as he has five grandchildren.